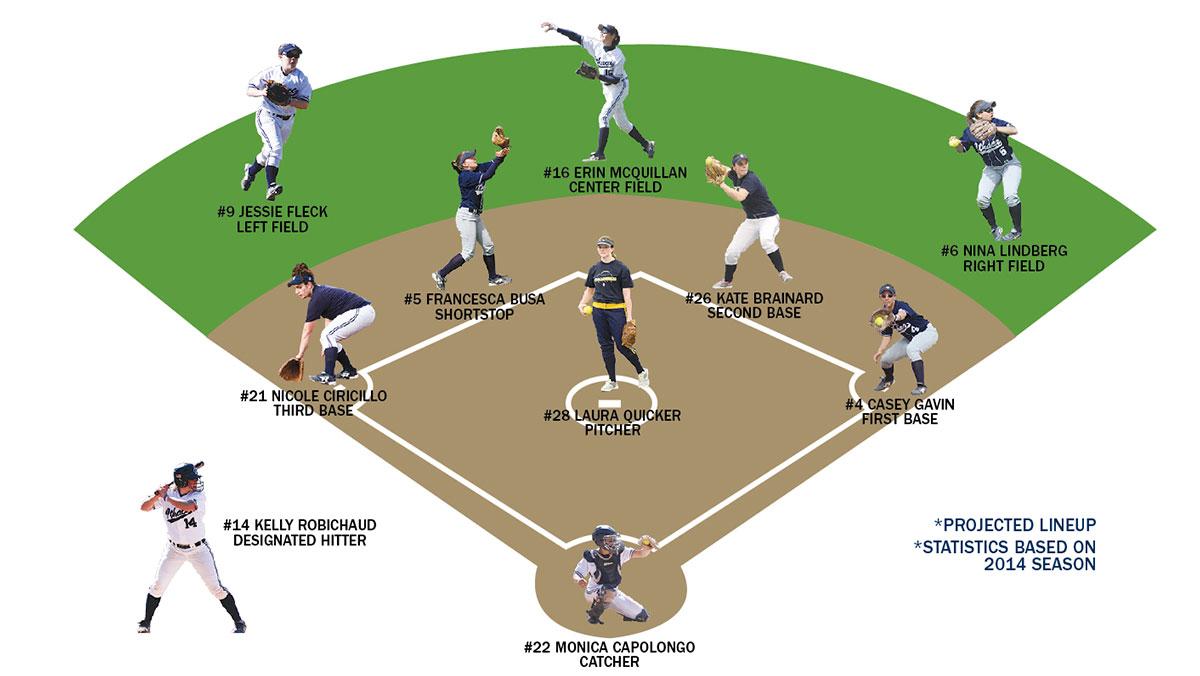 Despite finishing the 2014 season with an overall record of 26–14, regaining the Empire 8 championship title for the first time since 2012 and making a short playoff run, the softball team will look to start fresh in its upcoming 2015 campaign.

In the Empire 8’s 2015 Softball Preseason Coaches’ Poll, the Bombers tied Alfred University for the first-place spot on the list.

Head coach Deb Pallozzi said, after winning the conference last season, the Bombers are ready to come back even stronger, fully aware they are the team to beat.

“We have the bull’s-eye on our back, so everyone’s going to be coming after us, and we generally get everybody’s best game,” Pallozzi said. “I want to be the one that has the target on the back. I want to be the team they want to beat because that just makes us better in the long run.”

While the team has eight new freshmen joining the squad this season, Pallozzi said her veteran players will be one of the most important factors to the team’s overall success this year.

“We have veteran pitching, so the pitching should be strong, we have veterans behind the plate, and our shortstop and centerfielder are returning, so we’ll be strong up the middle,” Pallozzi said.

Among those noteworthy veterans are the captains of the team, who include senior catcher Monica Capolongo, senior shortstop Francesca Busa and senior outfielder Nina Lindberg.

While the Bombers are fairly set defensively, at the plate, the Blue and Gold will have to replace the powerful bat of 2014 Empire 8 Player of the Year, Sydney Folk ‘14, who hit .393 with 26 extra base hits in her last season as a Bomber.

Pallozzi said she has no doubt the void can be filled by her lineup this season.

The lineup consists of a number of impressive returners, including leadoff hitter Busa who hit .309 with a team-best 42 hits in her junior season, earning her an All-Empire 8 Second Team selection and a spot on the Empire 8 All-Tournament Team.

In the batter’s box, junior first baseman Casey Gavin should also be a big source of power for the Bombers after Gavin hit .371, naming her to the All-Empire 8 First Team, the NFCA All-Region Third Team and the ECAC Division III Upstate Softball All-Star Second Team.

Sophomore outfielder Jessie Fleck will also be an integral part of the Bombers’ offense after Fleck hit .324 last season, also earning her a spot on the All-Empire 8 Second Team and the Empire 8 All-Tournament Team.

Off the pitching rubber, the Bombers will have to fill the big shoes of pitching ace Sam Bender ‘14, who finished last season with a dominant 18–7 record and a noteworthy 1.58 earned run average.

With junior returners Laura Quicker and Allison Macari, who recorded ERA’s of 2.52 and 2.05, respectively, and freshman pitcher Payton Cutting joining the squad, Pallozzi said the team should be able to fill the hole left by Bender.

Capolongo said she foresees this year’s team success coming through a collective effort.

“For us, the key factor is having everyone on the same page and reaching the same goals, just working hard every day,” Capolongo said. “Everybody doing their part is going to make us successful. Our returners need to do what they need to do, but collectively we need to play to our potential.”

Pallozzi said she thinks it is her team’s level of focus that will ensure the Bombers’ success this season.

“I think our team culture is that we insist on things being done a certain way, disciplined, because if you’re disciplined in certain areas all your plays and everything will work, and I think we hold our kids to a very high standard of play,” she said. “Winning takes care of itself if you take care of those things.”

The Bombers will begin action by heading to California to play eight non-conference games from Mar. 9–13 for its spring break trip.

Junior outfielder Tara Condon said the team is more than ready to get the season started on the right note.

“Everyone’s stepping up and really performing,” Condon said. “No one’s backing off or afraid. Everyone’s full force, gung-ho, and it’s exciting to see every day, and we’re all ready for games to start and get the ball rolling.”