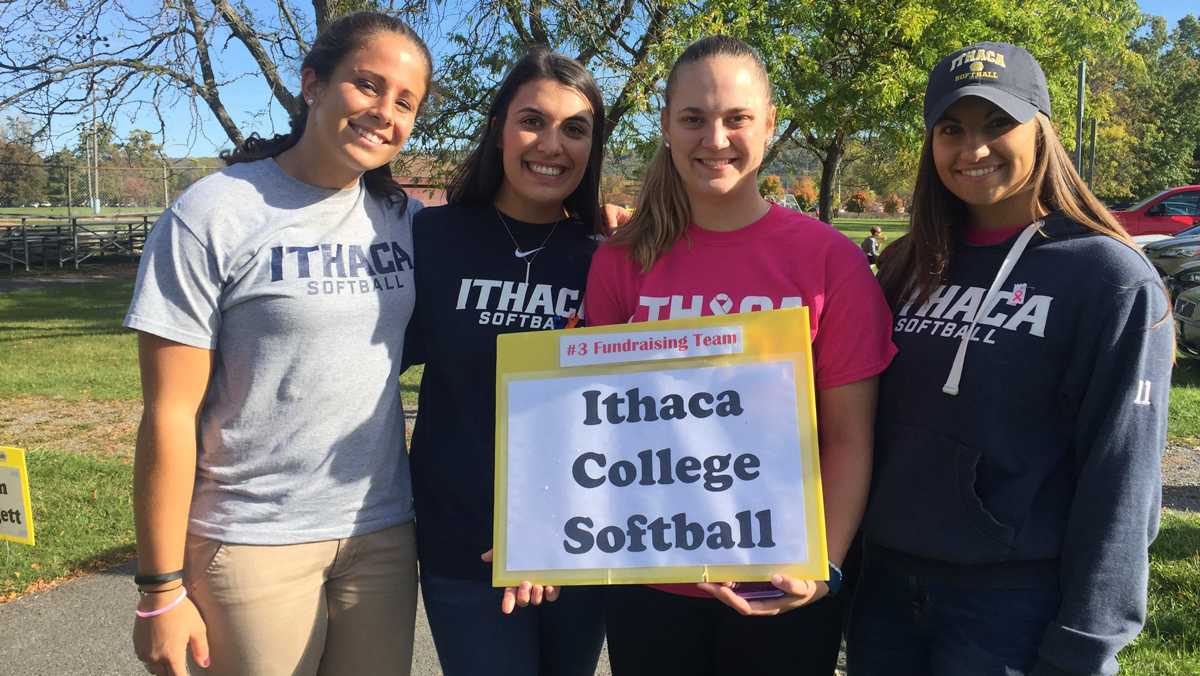 The race, which took place Oct. 21 at Cass Park, was a fundraising event organized by the Cancer Resource Center of the Finger Lakes. CRCFL, which was founded in 1994, provides resources to people in and around Tompkins County who have cancer. This year, the event raised $140, 379.

Megan Crowe, executive director of CRCFL, said that the event has become more popular as the number of people participating increased.

“We have also increased the number of sponsors, and we have been able to offer more giveaways, activities and entertainment,” Crowe said. “The event is special because it brings the community together to support a cause that everyone knows. Cancer affects many people in many ways.”

Participants in the race were able to join a fundraising team or enter as individuals. A total of 78 teams engaged in the event, but the college’s softball team raised the third most out of all the teams.

The college’s softball team has participated in the event since 2001. Head softball coach Deb Pallozzi said that the event is extremely important to her.

The CRCFL is able to provide many free services to cancer patients using the money collected from the race. Some of those services include Gentle Yoga, a Peer–to–Peer program, bus rides to New York City and the center’s own boutique.

Crowe said that much of the planning can be credited to the CRCFL development coordinator Jyl Dowd. For the past three months, Dowd focused on planning the event. The CRCFL used a mix of advertising and entertainment to get more people in the community involved in the event.

At the event, there was a warm–up Zumba activity and a free pancake breakfast for everyone. Runners and spectators could also enjoy the 23 different entertainment groups, which included musical performances and the Cornell University gymnastics team.

This past year, Bari Mance, head softball coach at St. John Fisher College, was diagnosed with breast cancer this summer and recently had surgery.

Junior catcher Alex Kimmel said that Mance was a big reason the team was at the event this year.

“Mance was diagnosed with breast cancer this summer,” Kimmel said. “Because of this, participating in the walkathon this year was very special for us.”

The team planned to raise $6,000 and was able to exceed their goal. Kimmel said it was a great feeling to fundraise over $6,000.

“A lot of the team has been affected by cancer, whether it be their families or something else,” Kimmel said. “Just being able to help out this way means so much to a lot of us on the team.”

Assistant coach Rinae Olsen said that seeing all the people participate in the event was special to her and the team.

“It is so special to see all of the people competing, especially the survivors and the people that are currently fighting, that are going through the walk with their support group,” Olsen said. “There were people there with no hair and some people with disabilities doing the walk as best as they could with full support around them, which was amazing.”

Crowe said that having the college’s softball team at the race was amazing for the program.

“We are very thankful and appreciative of the softball team helping promote, raise money and participate in the walk,” Crowe said. “We are lucky to have the team support us each year.”

Tompkins County residents will stand up against cancer during the 19th annual Cancer Research Center of the Finger Lakes Walkathon and 5K Run, which will take place Saturday at Cass Park in Ithaca.

Locals to walk for a cure against cancer

Softball takes down Manhattanville in a doubleheader