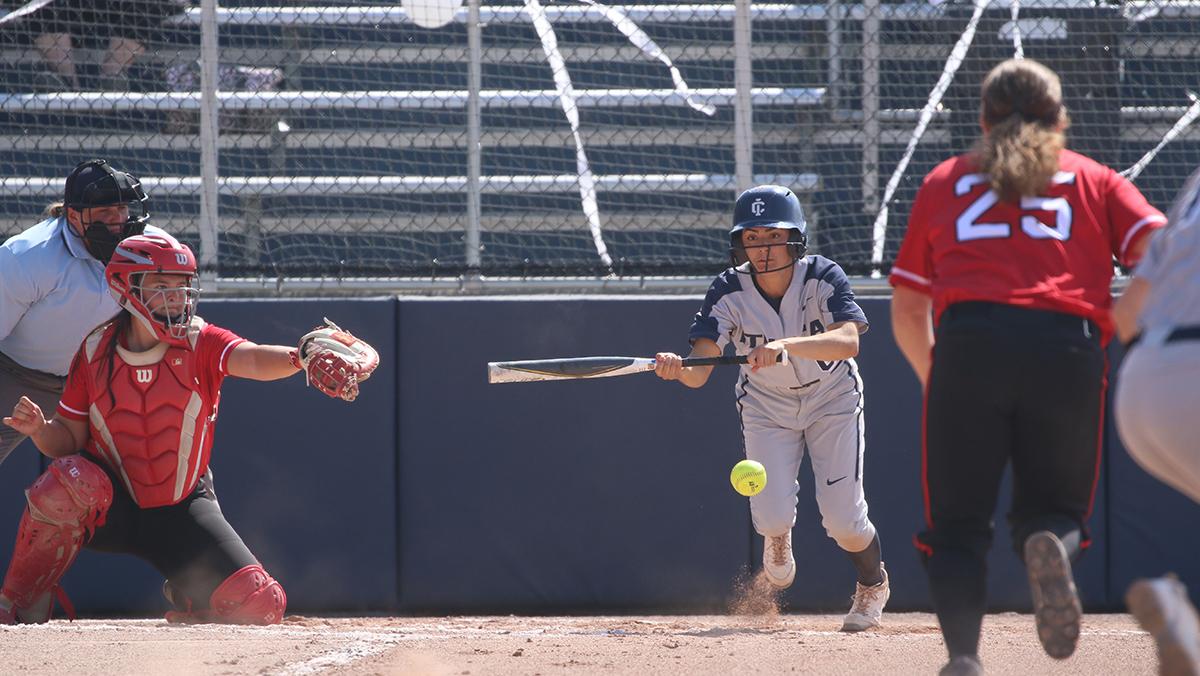 The Bombers looked to continue their winning ways as they hosted a doubleheader against Rensselaer Polytechnic Institute at Kostrinsky Field on April 24.

The Bombers split the two-game series with RPI on Sunday. The Bombers took game one in walk-off fashion, but fell just short in game two.

The Engineers tried to test the Bombers with a bunt on the first pitch in game one, but senior catcher Kira Flegenheimer reacted quickly to catch the pop-up in foul territory. They got their first batter of the second inning on base with a single to left field, but junior pitcher Riley Piromalli forced her third and fourth pop-up of the game, capped off with a diving catch at first base by senior infielder Julia Loffredo.

The Bombers struggled to get the bats going early, going hitless through their first three innings and striking out four times.

The Engineers bunted for the third time of the game in the top of the third inning, and beat Piromalli’s throw to first base. However, that chance was squandered when Flegenheimer threw the runner out trying to steal second base.

The Bombers broke through in the bottom of the fourth inning, getting their first hit with a triple by junior infielder Allison Dell’Orto. Loffredo followed up with a hard line drive to left field that could not be caught, reaching third base on an error and bringing Dell’Orto home. In the next at-bat, freshman infielder Sela Scheinman hit a long fly ball to right field that scored Loffredo on a sacrifice fly for a 2–0 lead.

In the sixth inning, the Engineers loaded the bases with no outs on two singles and a walk. A hard hit ball reached the outfield wall for a bases-clearing double and a 3–2 lead for RPI in the top of the sixth inning. Piromalli struck out her sixth batter helping her to get out of the inning.

Loffredo led off the bottom of the seventh with a walk. Two batters later, junior outfielder Kailey Collins crushed a two-run home run over the right-field wall to walk off game one.

Despite a tough game at the plate, head coach Hanna Quintana was pleased with the way the team competed when they had opportunities to cash in. The Bombers left no runners on base in game one.

“I think we made the pitchers work,” Quintana said. “Good things happened when we were deep in the counts.”

Piromalli had a great game in the circle finishing with nine strikeouts, including three in the seventh that kept the Bombers within one run.

“I love how Riley has been throwing for about two weeks now and she is really rounding into form,” Quintana said. “The ways she’s able to keep people off-balance with her changeup and then attack them with some of her movement pitches I think is really impressive.”

Freshman pitcher Anna Cornell started the second game with a strikeout, but the Engineers quickly hit back-to-back singles to get runners on first and second base. Loffredo ran a long way to catch a pop-up for the second out and junior infielder Tava Kasper fielded a hard ground ball up the middle for the final out, stranding the runners and keeping the game scoreless.

Graduate student outfielder Emma Kindblom led off the bottom of the first with an infield single and advanced to second base on a sacrifice bunt. Scheinman singled to left field two batters later to send Kindblom home, but she was thrown out on a close play at the plate.

Cornell pitched two straight three-up, three-down innings and struck out the side in the top of the third. It continued to be a pitcher’s duel through five innings as each team had only three hits heading into the sixth.

The Engineers got runners to first and third from two singles with one out in the top of the sixth. The next batter hit a deep fly ball to right field allowing the runner from third to score and take a 1–0 lead.

Trying to work another late comeback, Dell’Orto led off the bottom of the sixth inning with a walk and stole second base two pitches later, but the next three batters went down in order.

The Bombers went down 1-2-3 in the bottom of the seventh, dropping their first Liberty League game of the season. Quintana said the pitching was great, but just a few more defensive plays and timely hits could have turned the game around.

“We dug ourselves in a little hole and now we need to compete all week against some tough [teams],” Quintana said.

With an 18–11 record on the season and 9–1 record in conference play, the Bombers travel to SUNY Geneseo on Tuesday for a doubleheader, but return to South Hill to host SUNY Cortland on Wednesday.

After celebrating senior day after Saturday’s sweep over Skidmore College, the Bombers honored Kindblom on Sunday, the team’s only graduate student.

“Our leadership during this season has been fantastic,” Quintana said. “They’re effort-laden players and do a lot of teaching with our large underclassmen group. I love them all very much and I’m excited to see what they do in this final push.”