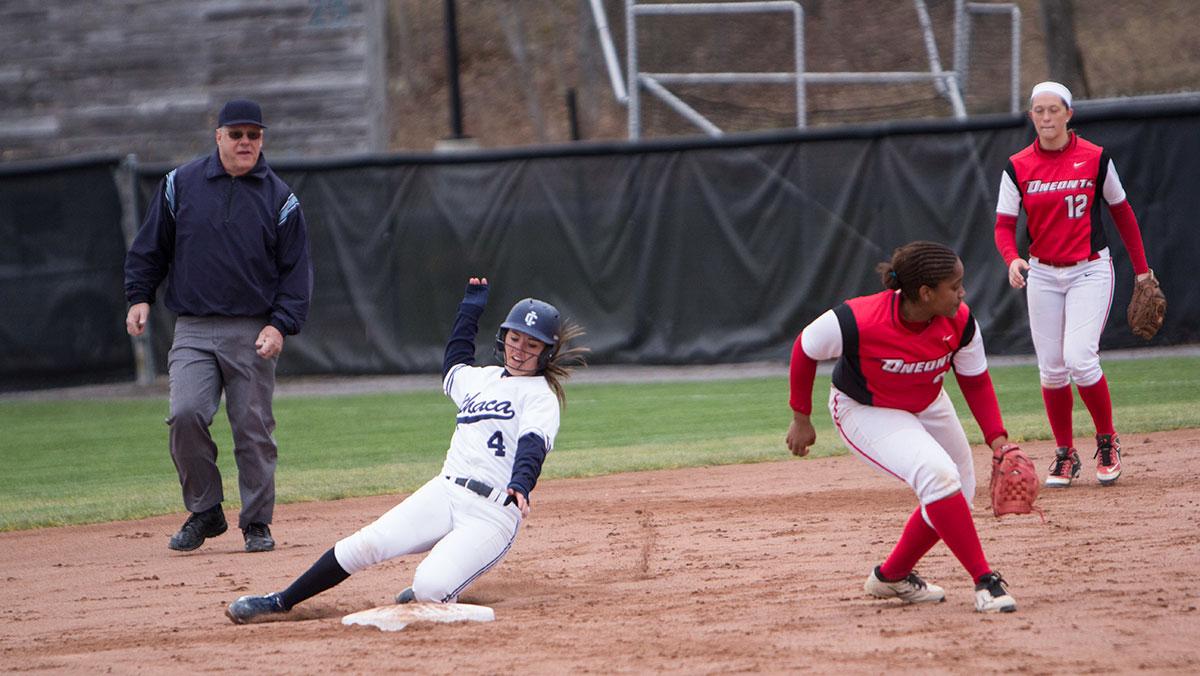 CAITIE IHRIG/THE ITHACAN
Senior Casey Gavin gets a good lead off first base and steals second base safely during a doubleheader against SUNY Oneonta.
By Adam Brobst — Staff Writer
Published: April 14, 2016

The Ithaca College softball team split its doubleheader on April 13  against the SUNY Oneonta Red Dragons. The Bombers currently sit at 16–6 on the season.

The first game saw a fairly quick first inning as each side was retired scoreless. However the Bombers came alive in the bottom of the second as they put up five runs. The scoring was started when, with bases loaded, sophomore Emily Bloom was walked at her first trip up to the plate, which lead to senior Kelly Robichaud coming home to score. This was good news for sophomore Allie Colleran because it meant that bases were still loaded as she came up to the plate. Colleran took advantage, smacking a home run off of the top of the left field fence bringing everyone home for the grand slam and giving the Blue and Gold a 5–0 lead.

After that inning, junior Oneonta pitcher Sabrina DeAngelis would recover and continue to pitch well, holding the Bombers scoreless for the next four innings.

However, after some clutch pitching by freshman Haley Congdon, Ithaca College was able to stop the Red Dragons run and put them away for good.

Senior Laura Quicker was credited with the win after pitching six innings and having four strikeouts.

Colleran lead the Bombers offense with three at bats, one hit, one run and four RBI’s.

In the second game, it was Oneonta who got things going early, scoring off a double into left field. The Red Dragons would score again twice in the top of the sixth inning to take a commanding 3–0 lead over the Bombers.

The Bombers would try and rally in the bottom of the sixth as senior Erin McQuillan dropped a single into right field that brought home fellow senior Casey Gavin, however it would not be enough. The Bomber’s rally was cut short and they fell 3–1.

Senior Allison Macari got the start on the mound where she pitched all seven innings. She would strike out five and garner an ERA of three.

Head coach Deb Pallozzi said that the team’s performance was not one of its better ones.

“We didn’t come out with the same level of energy that we’ve had other games, and the bottom line is Oneonta played really clean defense for both games and the second baseman was fantastic that second game taking away a lot of shots and we didn’t get a timely hit,” she said.

The Bombers take the field again for a doubleheader at 3 p.m. and 5 p.m. April 15 against Houghton College at Kostrinsky field.