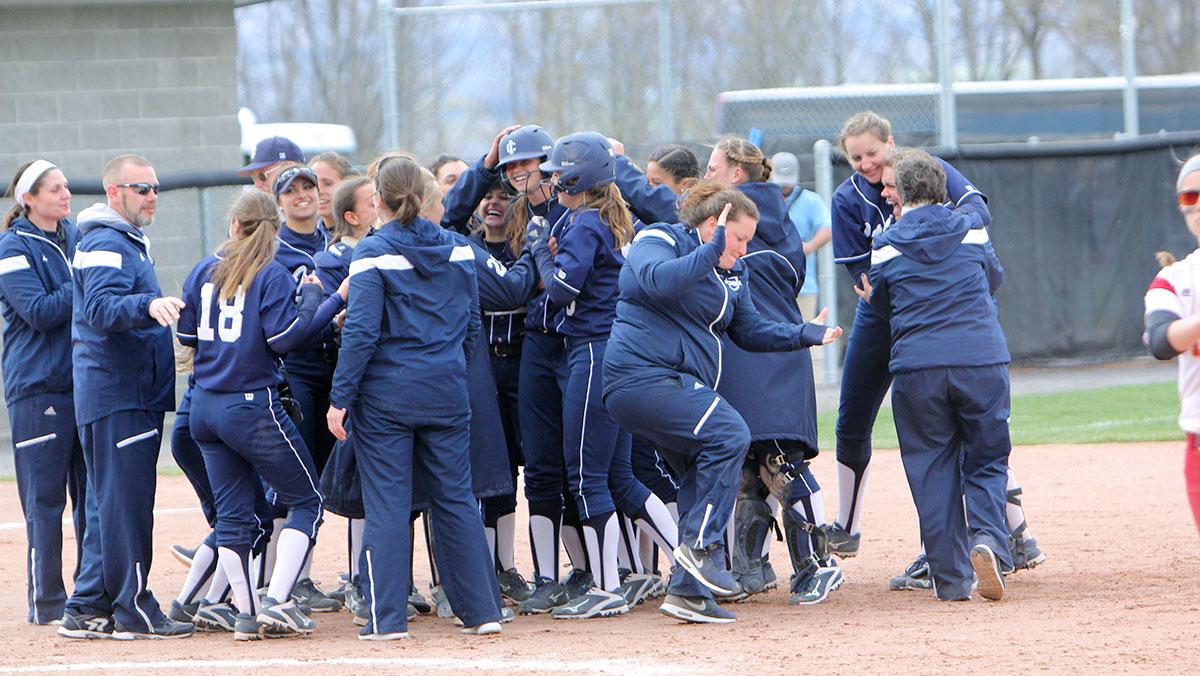 The Ithaca College softball team won the Empire 8 Championship May 8 after playing four games in the playoffs. The Bombers defeated Alfred University once and St. John Fisher College twice in order to pick up the championship.

Four teams qualified for the tournament. It is set up in a double-elimination style, and the team that does not lose two games comes out with the title.

The Bombers got its first win of the postseason on May 6 against Alfred 3–2.

The Alfred Saxons would add two runs of their own in the top of the seventh to put themselves ahead in the final inning.

The Bombers retaliated when freshman third baseman Vanessa Brown doubled to right center, allowing Skuraton to come home for the score. Then senior first baseman Casey Gavin drove a single up the middle that would allow Brown to score.

Senior Laura Quicker would get the start, but would only pitch three innings. Fellow senior Allison Macari would be credited with the win. She finished with four strikeouts in four innings.

Brown would lead the team in hitting with one hit, one run and one RBI in four at-bats. Skuraton would also finish strong on the offensive end with a run, a hit and an RBI in two at-bats.

In the following game May 7, in the bottom of the sixth, the Bombers were down 1–0 against St. John Fisher with one out. Brown hit a single, driving in junior right fielder Jessica Fleck and sophomore left fielder Allie Colleran to take a 2–1 lead.

Up to bat next was senior catcher Kelly Robichaud, who hit a homerun over center field to bring the Blue and Gold to their winning score of 4–1.

“I was really just looking for my pitch. I kinda struggled throughout the day so I was waiting for my pitch, and once I saw it, it was a good swing,” Robichaud said.

During the first four innings, Quicker, who started the game, did not let St. John Fisher score a run until the bottom of the fifth inning when Cardinals sophomore shortstop Danielle Ventrone hit a homerun over the centerfield fence.

Halfway through the bottom of the fifth, Macari took over for Quicker and didn’t allow any runs for the rest of the game.

Macari said it was a great game and she is proud of how her team played.

“Our whole team played well, we had a plan on how to attack the game and we executed, which let us get the win,” Macari said.

Even though the South Hill squad remained scoreless until the sixth inning, head coach Deb Pallozzi didn’t lose faith in her team.

“I think the kids did a tremendous job of staying tough with a tough pitcher. Everybody contributed, everyone was in the game, everyone gave their best at bats and when they struck out, it didn’t crush them,” Pallozzi said. “They went back and battled some more, and that’s what we are really going after.”

In its second game against the Cardinals, the Bombers lost 4–3, forcing one more game to be played.

The Cardinals got on the board quickly in the first, with two runs off two singles. The Blue and Gold scored one run in the second off a throwing error. The Cardinals were able to put up two more runs in the third and fifth innings.

The Bombers next two runs came in the sixth inning, when Robichaud hit a two-run home run to left-center field.

In the third and final game, both sides were scoreless through five. In the top of the sixth, the Cardinals got on the board with two runs produced by two errors. In the Bomber’s final at-bats in the seventh, Gavin got the Bombers’ rally started with a double to score Fleck. McQuillan ended and saved the game for the Bombers with a two-run single to give the Blue and Gold a 3–2 victory.

With the win, the team earned an automatic bid to the NCAA Tournament. They will find out who they are playing at 1 p.m. May 9 during the NCAA selection show.