Softball walks off the field with two wins against Utica 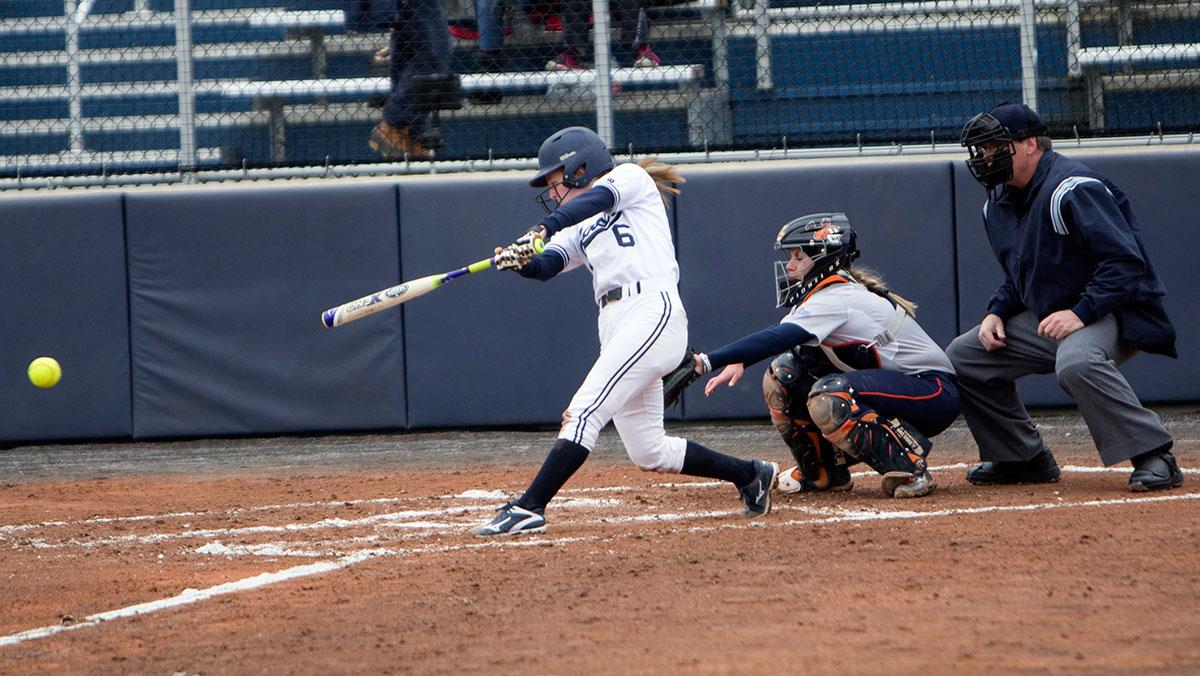 The Ithaca College softball team beat Utica College twice April 10 in a doubleheader to continue its dominance within the Empire 8.

In the first inning, Utica would strike first, scoring on a double by senior Cassie Smith who would drive in fellow senior Alysa Russell.

In the second, the Bombers’ bats came alive. Senior Erin McQuillan would get things going by knocking a double into center field, bringing both senior Kelly Robichaud and freshman Alex Wright home. Later in the inning, sophomore Emily Bloom and McQuillan would both reach home after an error in the infield.

Utica would answer back with four runs of their own in the top of the third inning. However, the Blue and Gold would strike back with two more runs, putting them ahead by one.

In the fourth, the Bombers tacked on another run as Robichaud scored again off of a double from Wright to centerfield. The scoring would take a pause in the fifth and wouldn’t resume until the bottom of the sixth where the Bombers would knock in two more runs.

Utica would try and rally late driving in three runs but would be unable to get the fourth run needed to tie the game as the Bombers would close out the inning.

Freshman Haley Congdon would be credited with the win after she pitched four innings and only allowed four hits, three runs and had six strikeouts. Senior Laura Quicker would come in for three innings of relief pitching and had nine hits, five runs and two strikeouts at her time on the mound.

Robichaud led the team in hitting with four at bats, three hits, two runs, and one RBI.

In the later game, the Bombers would strike first, this time scoring in the bottom of the first inning as sophomore Allie Colleran blasted a homer.

Utica would score twice in the top of the second and then once in the top of the third. The Bombers would tie it back up though in the bottom of the third, where they brought home two runs scored by Colleran and freshman Vanessa Brown. Utica wouldn’t score again, but the Bombers did, scoring two more times in the bottom of the fourth after another Colleran home run brought home Junior Jessie Fleck. They would also score a final time in the fifth inning as Brown came home off a wild pitch, officially putting Utica away. Senior Allison Macari would get the win after pitching all seven innings with six hits, three runs, and two strikeouts.

Colleran led the offense for the Bombers after coming to the plate four times, getting three hits, three runs, three runs batted in and two home runs.

The South Hill squad, now 15–5, will take on SUNY Oneonta in another double header that starts at 3 and 5 p.m. April 12 at Kostrinsky Field.