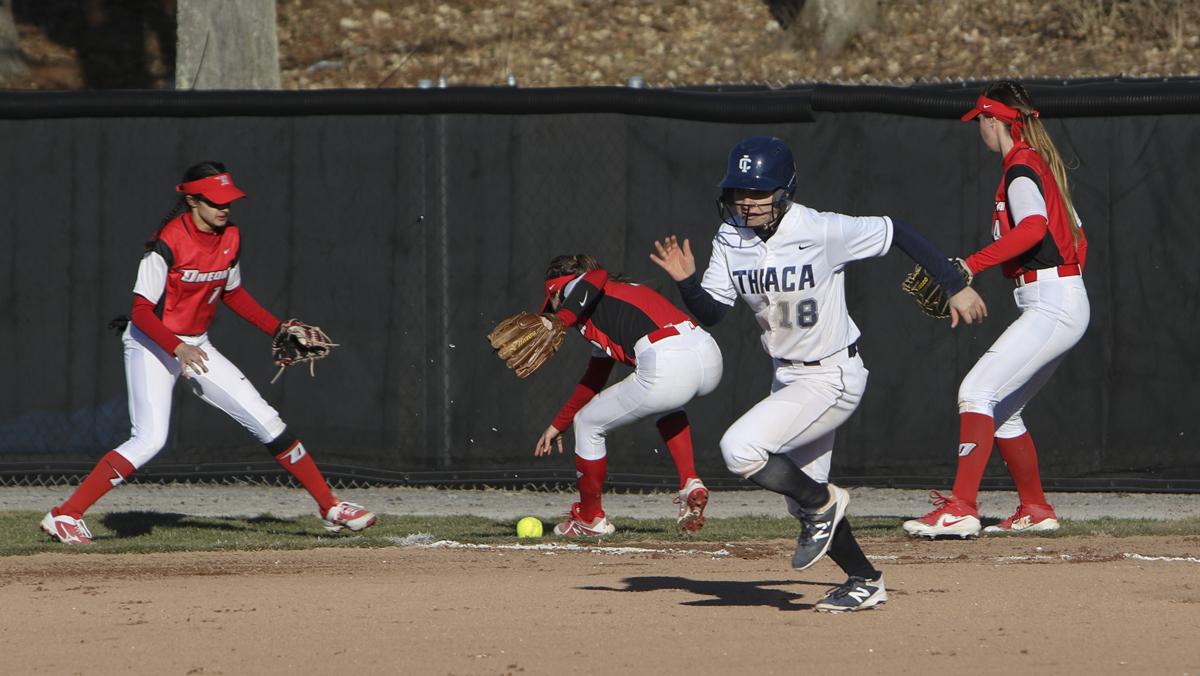 The Ithaca College softball team took down SUNY Oneonta in the first game of a double header by a score of 4–3 March 27.

The Red Dragons struck early, scoring a run in the first and third inning. It began with a sacrifice fly by sophomore shortstop Caroline Koch allowing senior catcher Selena Ruiz advance to second and scored senior outfielder Dana Del Geni. In the third inning, a double to center field by sophomore first baseman Amanda Sexton drove in junior second baseman Brooke Corbett from first base to make the score 2–0.

The Bombers would answer the following half-inning however, senior center fielder Annie Cooney sent a shot to left center field over the fence for a home run in what was her only hit of the day. The next two batters, senior third baseman Vanessa Brown and senior second baseman Nikkey Skuraton, both singled, putting players on first and second. Head coach Deb Pallozzi delivered the signs for a double steal on the next at-bat, and a wild throw to catch Brown at third allowed both Brown and Skuraton to score in what was a pivotal moment of the game, putting the Blue and Gold up 3–2 at the end of the third.

Later in the fifth inning, the Dragons would tack on another run as Corbett flew out to right field scoring Ruiz tying the game at three runs apiece. Ruiz singled to start the inning, was advanced to second on a fielder’s choice and proceeded to steal third base before finally hustling to home plate after the pop fly.

The game headed to the bottom of the seventh and the Bombers had the chance to bury this game in the final inning. After a pinch runner was caught stealing and Cooney struck out swinging, there was just one out left for the Bombers to work with. Brown strolled up to the plate for her fourth at-bat of the day, and no more than a few pitches later Brown connected with the ball driving it over the left center field fence for a walk-off homerun and a win for the Blue and Gold.

The second game would be another back and forth affair, this time however the Bombers tied the Red Dragons 3–3 after seven innings of play.

The Blue and Gold continued to impose their power over the Dragons, after early in the second inning junior designated hitter Abby Shields sent a pitch over the left field fence – the third homerun for the Bombers on the day. In the bottom of the fourth the Bombers got a single from senior first baseman Alex Wright who then stole second base. Wright advanced to third after a groundout from Shields, and yet another errant throw from the Dragon’s defense allowed Wright to score. The game was then tied at two.

The Red Dragons had some power of their own, beginning the top of the fifth inning by doubling, singling and earning a walk. Del Genio singled up the middle driving in two runs. One inning later in the top of the sixth, Koch homered to left center field to take the lead 3–2 over the Blue and Gold.

In the bottom of the same inning, the Bombers got walks from Skuraton and Shields putting two players on base. Senior shortstop Hannah Anderson singled to center field advancing Shields to third and scoring Skuraton – tying the game.

Both teams were able to get players on base in the seventh but came up short and the result was a tie.