Sophomore makes a splash for men’s swimming and diving team 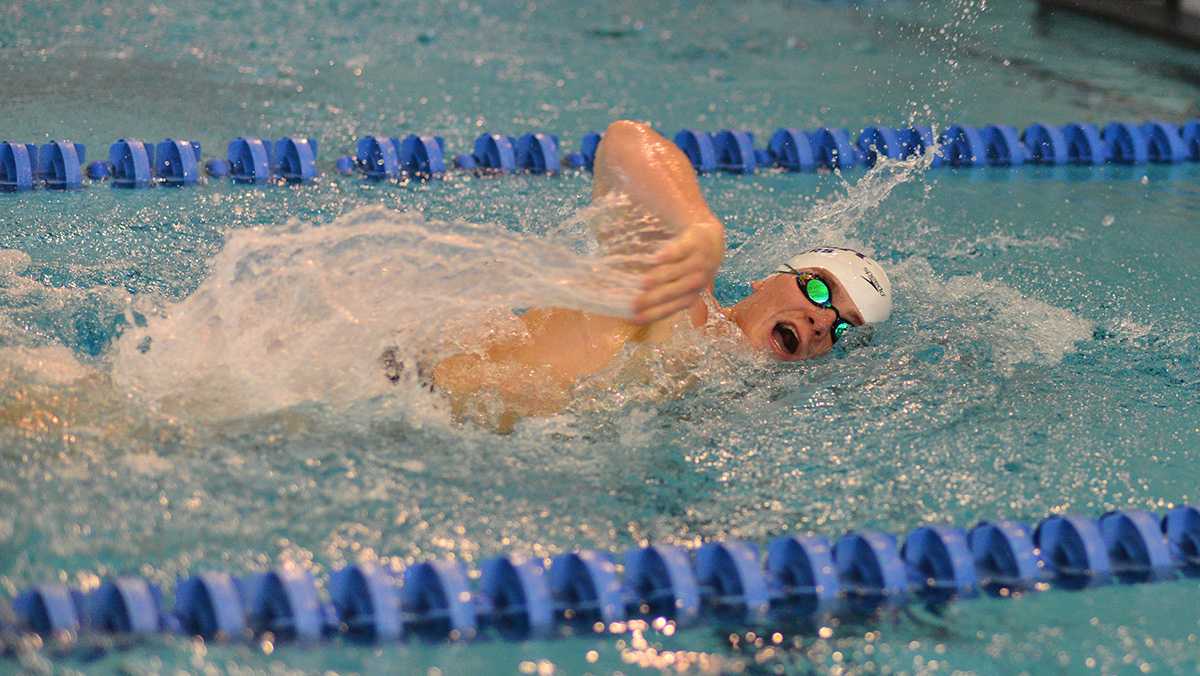 Sophomore Jake Hewitt has been sporting blue and white for his entire college career, but only recently for the Bombers. Since transferring to Ithaca College in the fall, he has made significant waves by bringing in top times for the team.

Hewitt swam for SUNY Fredonia during his freshman year in 2014–15 and then took a year off school. While many variables played into his decision to switch schools, he said the swim team was ultimately the deciding factor. He came to Ithaca College on a swimming recruitment trip, and he said the trip convinced him to transfer.

“The team was super friendly and seemed very competitive,” Hewitt said. “I felt very much at home when I was here.”

He also credits the beautiful pool in the Athletics and Events Center as a key selling point.

Hewitt said the transition itself was not difficult for him.

“I never really viewed transferring as being a struggle once I got here,” Hewitt said.

Senior captain Gregory Markert said all transfer swimmers act and adapt very differently, but usually in one of two ways: Some may come in overconfident and seem entitled, while others may come in and keep their heads down and be more timid. Markert said he was pleasantly surprised with the transition Hewitt made. He credits Hewitt for being very talented and hardworking without being presumptuous.

“Some come in hotheaded and try to prove themselves,” Markert said. “He’s been an equal mean between the two. He’s put in the work that needs to be done in order to win, and the team sees him as an asset that they can use.”

Hewitt said he is used to balancing all that comes with school and athletics because he has been playing sports since he was young.

“I’m not saying it’s easy to balance all the work,” Hewitt said. “It takes a lot of time and perseverance to get everything done correct and on time.”

As a kid, Hewitt played various sports, including baseball, football, soccer, basketball, swimming and wrestling. He said he eventually decided to stick to swimming and drop the rest of the sports, but the athleticism he gained from those other sports can be seen in the pool.

“Jake’s strengths are hard work and raw talent,” senior captain Ian Foley said. “Some people are talented but don’t work hard, but he is the best of both worlds.”

Foley said Hewitt inspires others to push themselves to be better and he said Hewitt is always cheering on his teammates.

“He has succeeded very well in taking on a leadership role for the underclassmen,” Foley said. “He’s older and fast, but in the same shoes as first–years.”

Foley said Hewitt’s leadership this season has foreshadowed a possible captain nomination in the upcoming years.

“I can see him being nominated for captain, which speaks about his character,” Foley said. “He has a very bright future ahead of him.”