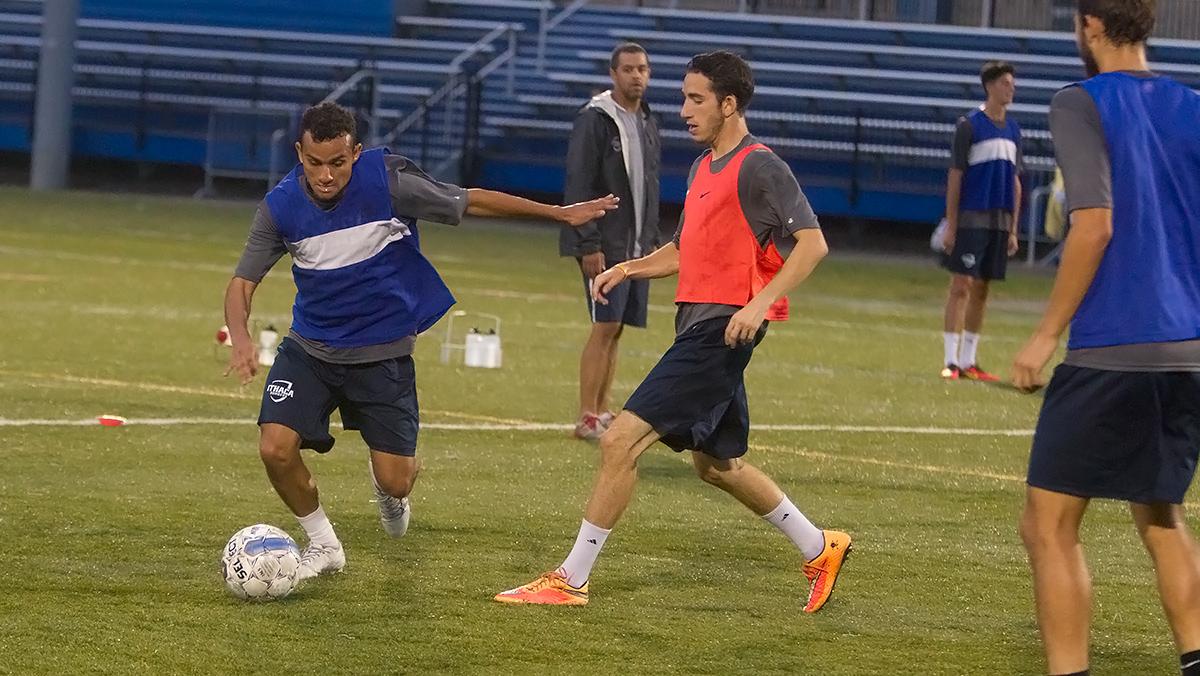 FERNANDO FERRAZ/THE ITHACAN
Sophomore Nestor Canenguez dribbles the ball past a teammate during a scrimmage in the Bombers practice on Sept. 8 in Higgins Stadium. Canenguez wears No. 22 for the Bombers.
By Taylor Muench — Contributing Writer
Published: September 14, 2016

Growing up in the small country of El Salvador, sophomore Nestor Canenguez played the game of soccer in the streets that breed resilience, and despite facing adversity, he learned to never give up on his goals.

“In El Salvador, there is no other sport,” Canenguez said. “You have to love soccer. I remember going to the local restaurants and just watching soccer there because my family didn’t have a TV. Soccer is the main sport they play — really the only sport I played.”

After trying out and not making the Ithaca College men’s soccer team last year, Canenguez, an unrecruited hopeful, earned a spot on the Bombers’ 28-man roster for the 2016 season.

Canenguez’s family moved from El Salvador to Cambridge, Massachusetts, when he was 8 years old. He became involved in soccer through local club teams, city teams and eventually, his high school team.

Prior to this season, Canenguez had not played organized soccer since his senior year of high school in Cambridge. He then took a gap year to work as a physical therapist aid in Boston before arriving on campus last fall.

Once he got to Ithaca, Canenguez said, he knew making the soccer team was not going to be easy.

“It was intimidating,” Canenguez said. “I wasn’t playing much soccer because of my gap year. I didn’t know what to expect. The level of play is a lot faster. Someone is on you is a lot quicker. You have less time to think. Pretty much every touch has to be on point.”

The team didn’t have much room to expand its roster for its 2015 campaign, and head coach Patrick Ouckama said he had to make the hard decision to cut some players who showed promise.

“It’s never easy to cut anyone, let alone Nestor,” Ouckama said. “He showed well. We had a strong group last year, and he didn’t end up making it. It’s never an easy conversation to have.”

As a physical therapy major, Canenguez said he understands the process of a comeback. So when he had the tough conversation with Ouckama, Canenguez said, he knew that if he put in the work, his chance to be a part of the team wasn’t over.

“It was heartbreaking,” Canenguez said. “Coach and I had a long talk about why I didn’t make it and what to work on in order to make it this year. I was upset for some time, but it motivated me to work out and stay in shape.”

Canenguez said he joined the club volleyball and club golf teams last year for no other reason than just to try something new and different. He also worked out with the soccer team during its training sessions last spring.

Senior captain Scott Halpern said he not only saw the potential that Canenguez had as a player, but he saw the kind of teammate that Canenguez was becoming.

“He’s shown resiliency because he keeps coming back,” Halpern said. “That work ethic that he has is something that our team works for. … He’s done extremely well, and we completely welcome him to the team. He knows his role, he knows what he’s getting himself into and he’s very positive.”

However, Canenguez said making a comeback like this was difficult at times. During the summer, he worked in Cambridge, so his summer training schedule consisted of going on early morning runs and workouts before going to his job.

Canenguez said he made a lot of connections his first year with members of the team, which made this mission about more than just soccer.

“When the team saw me around campus, they would all say ‘hi’ to me, shake my hand and would ask me how I was doing,” Canenguez said. “The team was always welcoming, and they respected me because I tried out.”

Ouckama said the improvements Nester made were apparent and impressive during tryouts.

Canenguez said he isn’t satisfied yet. From playing in the streets of El Salvador to now wearing the Bombers logo on his No. 22 jersey, he said he understands that it’s going to be hard to get playing time on such a competitive team.

“I was shocked when I made the team,” Canenguez said. “When I made it, I was a little bit surprised, but I was also incredibly happy with myself. My goals for this season are to make the team better. I want to help them out to improve their skills and be there for whatever they need.”