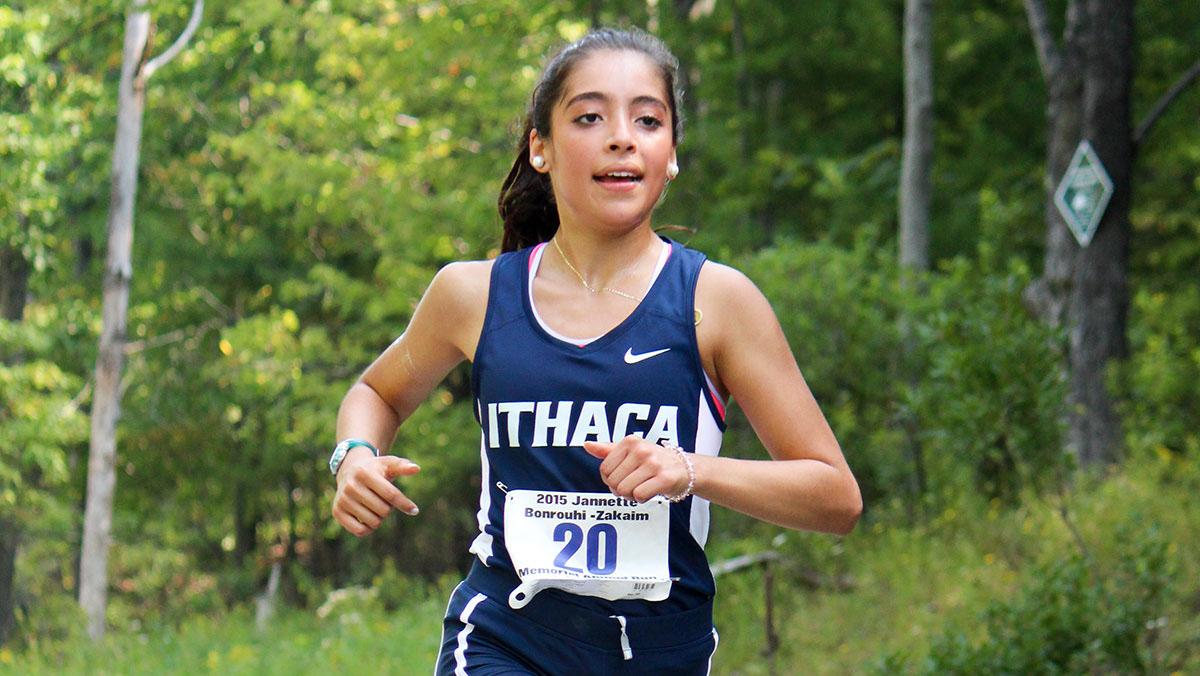 Yana Mazurkevich/The Ithacan
Sophomore Denise Ibarra runs in the Jannette Bonrouhi-Zakiam Memorial Alumni Run on Sept. 5. Ibarra has quickly transitioned from a newcomer to a leader for the women's cross-country team this season.
By Joelle Goldstein — Staff Writer
Published: October 7, 2015

If there’s one thing sophomore cross-country runner Denise Ibarra knows, it is that giving up is never an option. Even despite a five-month–long hiatus due to an ankle injury in her junior year of high school and competing as the only female in her senior season of cross-country, Ibarra knows what it takes to get to, and stay at, the top.

Ibarra, a native of Wassaic, New York, began her cross-country journey in high school. Originally a multi-sport athlete, Ibarra said she played basketball and soccer and ran track and field before discovering her true passion for distance running.

In the fall of her junior year, Ibarra continued playing soccer while beginning her cross-country season. She said this became a challenge for her, as several meets and practices conflicted with one another, and her physicality and energy were drained as a result.

In her junior year of high school, Ibarra contracted a severe case of tendinitis in her ankle, an injury that kept her out of competition for five months. As her senior year approached, Ibarra said she decided to retire from soccer so that she could focus on cross-country in the fall and track and field in the spring.

Her cross-country coach suggested she take a year off to heal the inflamed tendons in her ankle. However, Ibarra was determined not to take any time off.

“A former teammate of mine had stopped running entirely because of an injury,” she said. “For me, seeing her case made me want to push forward and keep running. I like to think of the fact that I can still run as a privilege. I was inspired to keep trying, despite having so many things against me.”

The injury also provided Ibarra with some insight for her collegiate future, helping her decide on a career path. Ibarra, who is currently a health sciences major considering physical therapy as a career path, said she attributes her professional ambition to this.

Moving into Ibarra’s senior season of cross-country, another obstacle came her way: competing as the only female on her school’s team.

“I was in really bad shape, to the point where I couldn’t do more than 10 minutes or I’d be out of breath,” Ibarra said. “Not having anyone to run with definitely affected me. All my workouts were by myself. My coach was really great, and he really pushed me and gave me the ‘oomph’ that I needed.”

Despite being the only female competing during her high school senior season, Ibarra said her male teammates were supportive and took her under their wing, allowing her to work out with them. It was the camaraderie and team dynamic that made Ibarra excited for the new challenge she would experience at Ithaca College.

Ibarra said at first she was reluctant to run with so many unfamiliar faces around her, but over time she became more comfortable with the idea.

“I was very nervous to be exposed to a team and having girl teammates to run with, but I think once the season started, my mindset was much better,” Ibarra said. “I learned to enjoy it and take advantage of the new teammates, having people to run with and pull me along with them.”

Although Ibarra wasn’t recruited initially and even considered not trying out due to nerves, she said head coach Erin Dinan and the rest of the team encouraged her from the start.

“Running in college was never a definite,” Ibarra said. “The coaches and team have helped move me along and were very good at welcoming me into the program.”

Despite only having one year of experience under her belt, Dinan said Ibarra’s leadership by example is one of her strongest assets.

“Being a sophomore at the top of her team, she’s become quite a leader of sorts,” Dinan said. “Her attitude and determination are incredible attributes of a leader for our team.”

Dinan also said Ibarra’s carefree yet passionate attitude toward running has helped the entire team to succeed this season.

Ibarra has made her mark as a Bomber thus far, most recently placing first for the Blue and Gold and placing 38th overall at the Mike Woods Invitational at SUNY Geneseo on Oct. 3. She finished with a time of 22:53.3 — 1:37 faster than her time from the same race last season.

Fellow sophomore Alexis Kindig said Ibarra always looks forward to practices to watch her teammates improve just as much as herself.

“She pushes everyone to do their best and is really supportive of all of us,” Kindig said. “Seeing how much she has improved within these past two years is really inspiring and shows how much hard work can pay off.”

Senior captain Anna Fay said she has been impressed with Ibarra’s performance so far this season.

“She’s optimistic, fun to be around and incredibly hardworking,” Fay said. “It’s been awesome to see her hone in on her talent and realize her full potential this year.”

While Ibarra is all about the team dynamic, she said she is ready to make personal strides for herself as well, learning from her past experiences.

“You get to overcome your personal barrier. It’s all within you and it’s a challenge,” Ibarra said. “It’s all mental — the fact that I stayed in it, didn’t give up and pushed through after that bad spot from my injury is my biggest asset as a runner. Even in races where I don’t feel good, I can still mentally push, and the mental strength I have now is what I got from all of that.”