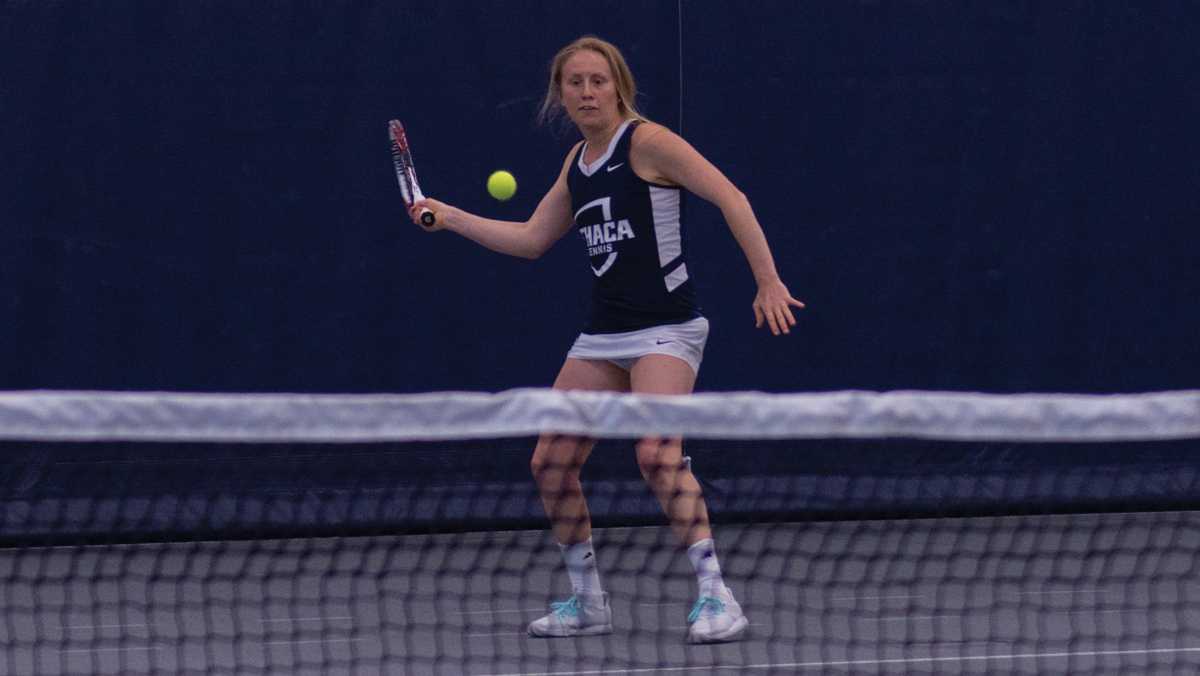 Before the start of the 2018 Ithaca College women’s tennis season, sophomore Parley Hannan’s experience playing tennis came from playing during the summer with her family a couple of times a week.

Now a member of the women’s tennis team, Hannan has started in eight of the nine matches for the Bombers.

Knowing the tennis roster was small, Hannan asked Bill Austin, men’s and women’s tennis head coach and instructor of her tennis class, if he needed any more athletes on the team for this season. Despite Hannan having no experience playing competitive tennis, Austin said yes.

Hannan played squash her sophomore and junior year of high school. Squash is a racket sport played in singles or doubles on a court surrounded by four walls.

Hannan said that playing squash in high school helped with her transition to the women’s tennis team.

“A lot of my strength and power that I get in tennis is from squash because you learn to hit the ball really to get the biggest depth,” Hannan said.

Hannan said that even though she played a sport similar to tennis, there were aspects of tennis that were challenging for her. She said that coming into this season, she had a weak serve because in squash, serving isn’t as important as it is in tennis.

Hannan transferred from the University of Colorado at the start of the school year. She said that she did not like the environment of her former school and she grew to love the city of Ithaca from visiting her sister, who graduated from Cornell University in the winter of 2017. Hannan said that coming to Ithaca College made her feel at home right away and it was much better than Colorado.

Not only did Hannan play squash in high school, but she also played soccer and lacrosse and was a member of the swim team throughout her four years. Austin said that part of the reason she is having early success is because of her athleticism.

“She’s very athletic and she’s still learning, but she’s learning by leaps and bounds,” Austin said. “She is a good runner, she’s ready to go and very eager to learn.”

So far this season, Hannan has helped the Bombers to a 3–6 overall record. Hannan got her first win of the year against Union College, where she defeated junior Alex Greenberg 8–6.

Hannan said the support from her teammates has played a crucial role in her becoming adjusted to tennis.

“At first, I was really nervous because I know with a team like this when you’re fighting for your space in the lineup and to my complete surprise it wasn’t,” Hannan said. “Taylor [Ginestro] helped me and I talked with her and she got me really excited to join the team. Being able to come in with that enthusiasm really helped and overall it was really great.”

Ginestro, a junior, said that Hannan has learned a lot since the season started.

“Parley has improved so much throughout the season,” Ginestro said. “It’s been so exciting to see the progress she’s making and I’m really proud of her. She has been getting more and more consistent and it’s very impressive considering where she started.”

Hannan said that she loves playing tennis for the college and is very excited to see how the rest of her collegiate career unfolds.

“I’ve already made progress in such a short time,” Hannan said. “It’s exciting and since I already see so much improvement, I am really excited to see where I stand with tennis. So I’m getting more excited and more confident and it will help me excel the way I want to.”