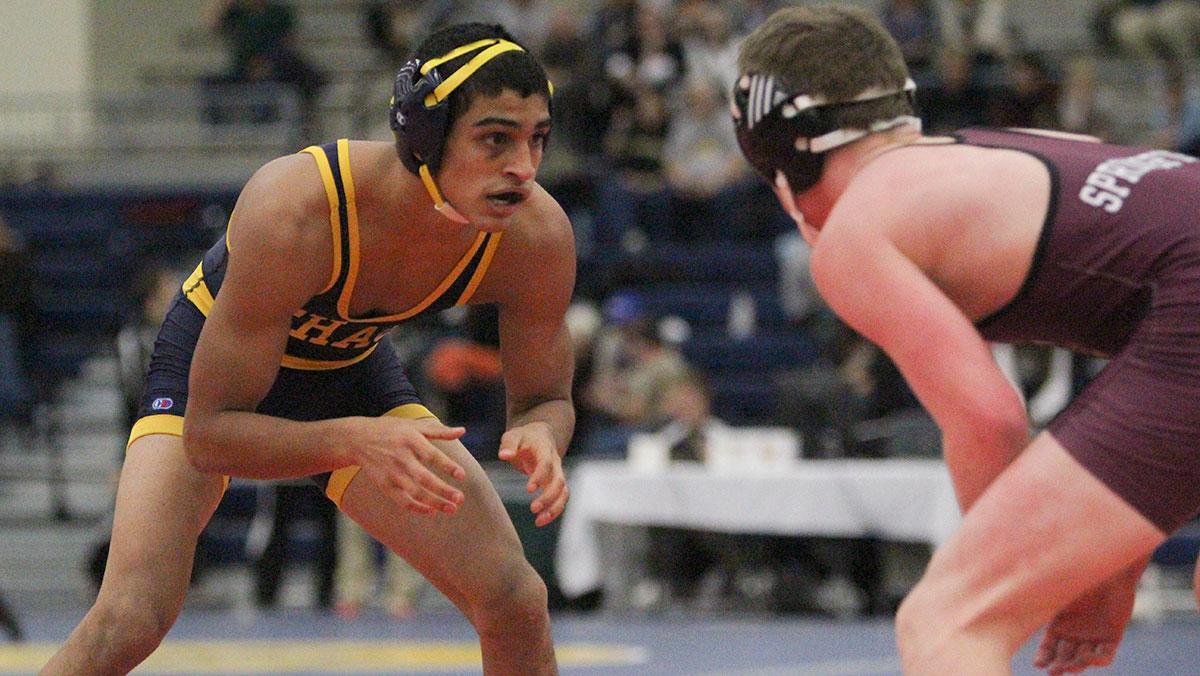 When the wrestling team was still in preseason training during the fall, head coach Marty Nichols said the squad’s underclassmen would need to have a major impact if the team was going to be successful. So far this season, Nichols said, that question has been answered definitively: they have.

The team’s underclassmen have helped the Bombers, who are currently ranked 12th in the nation, compile a 6–2 record in dual-match competitions with five blowout wins. The Blue and Gold’s only two losses have been to nationally ranked teams. In tournaments this season, the team has finished second in both the Ithaca Invitational and the New Standard Corporation Invitational, as well as a 10th place finish in the New York State Championships at Cornell University. The Championships featured a collection of schools ranging from Division I to Division III throughout New York.

Helping lead not only the underclassmen but also the entire team is sophomore Nick Wahba, who competes at 141 pounds. He is coming off a successful freshman season, where he compiled a 19–3 record with nine decisions, seven majors and three pins.

However, Nichols said the manner in which Wahba earned those numbers was more impressive than the statistics themselves. Last season, Wahba competed in the lineup at 133 pounds behind then-junior Alex Gomez, who consistently ranked as one of the top wrestlers in the nation in that weight class. Wahba said he saw wrestling behind Gomez as a learning experience that he used to propel him into his sophomore year.

With five weeks left in the regular season, Wahba has almost matched his win total from last season by amassing a 15–4 record with nine decisions, two majors and four pins. His sophomore campaign has been highlighted by a first-place finish at the New Standard Corporation Invitational on Dec. 6. Wahba also finished second in the Ithaca Invitational at 141 pounds.

Wahba said a major influence in the success he has experienced this season is the aggressiveness with which he has been wrestling and the offensive mindset with which he goes into each competition.

“This year I became more aggressive on my feet,” he said. “It’s harder for someone else to use their offense while I’m constantly on offense.”

Wahba said as he looks to continue his success, he trusts that his coaches will stay on him and make sure that with each day he gets at least one percent better — the team motto.

“My coaches are really good at pointing out the things that I need to improve on, and they’re actually better at helping to improve on those things,” he said.

Nichols said while Wahba has experienced success in his second year on the team, there is even more room for improvement and greatness within Wahba’s grasp.

“Nick keeps getting better all the time,” he said. “If he continues to improve, we could be looking at a national champ. He’s got that kind of talent.”

Gomez, who knows what national competition looks like after finishing sixth in the country during his own sophomore year, said he trusts Wahba in the lineup despite his youth.

“I know I can rely on him to get us a win, at least three points,” Gomez said. “He’s a smart wrestler and a mentally tough kid.”

Despite the individual success he is experiencing, Wahba said he remains focused on helping the team win and credits Gomez and the other veteran wrestlers for helping push the team to its ultimate goal.

“We have really great captains, and I enjoy following them and allowing them to get me better,” Wahba said. “Everyone is always pushing each other in the room. We help to continue toward something that is hopefully a national championship team.”