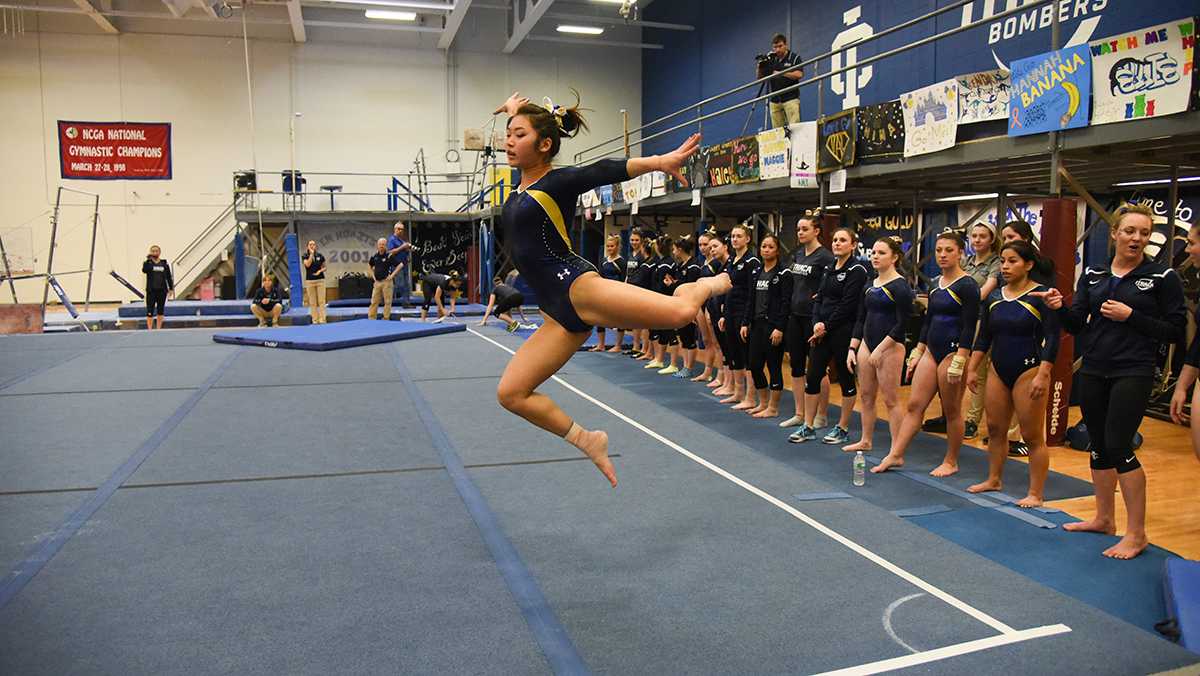 The Bombers hope to place in the top three at the Regional meet March 6 so they can qualify for the National Championships.

Graduate student and co-captain Valerie Cohen said one of the highlights of the season so far is freshman Carolyn Nichols’ vault and floor, in which she has personal bests of a 9.5 and 9.625, respectively. Additionally, freshman Nina Bustamante Nadeau’s beam has been solid all season, with a high score of a 9.625. Senior Megan Harrington has a high score on bars of 9.45, and sophomore Mina Shernan’s 9.2 bar score is another highlight.

“Everyone has come together as a team to contribute to a positive atmosphere,” Cohen said. “I’m so proud of how far we’ve come as a team, and I am excited for the second half of our season.”

Harrington was awarded Gymnast of the Week in the East Region on Feb. 8. She won bars and floor against Springfield College on Feb. 6 with scores of 9.45 and a 9.625, respectively. Additionally, she tied her season-best on vault with a 9.425, placing fifth. Nichols was a standout as well, tying with Harrington for first place on floor with a 9.625 and finishing third on vault with a 9.45.

Head coach Rick Suddaby said there has been a good mix of freshmen and seniors leading the team this year.

“It’s really fun on this team to see both a senior and a freshman stand out,” Suddaby said.

Suddaby said the goal for the rest of the season is to compete like they train.

“If we do that, we can compete for the top three in the region and a trip, as a team, to Nationals,” Suddaby said. “For this team, it is critical for us to focus on what we do, how we perform. Focusing on the result is a distraction that we cannot afford. We will remain focused on competing like we practice. The results will take care of themselves.”

The team has competed in one meet fewer than some of the other schools, as its meet Jan. 24 against Ursinus College was canceled.

Cohen said it was disappointing to have to miss the meet.

“It’s always a fun time competing there and would have been another opportunity to practice competing under pressure,” Cohen said. “However, we did gain an extra training day because we didn’t travel that weekend. This allowed us to make corrections and upgrades that will help us throughout the rest of the season.”

The team has less than a month until the March Regionals. If the team qualifies to the National Championships, that will take place March 18 in Brockport, New York.