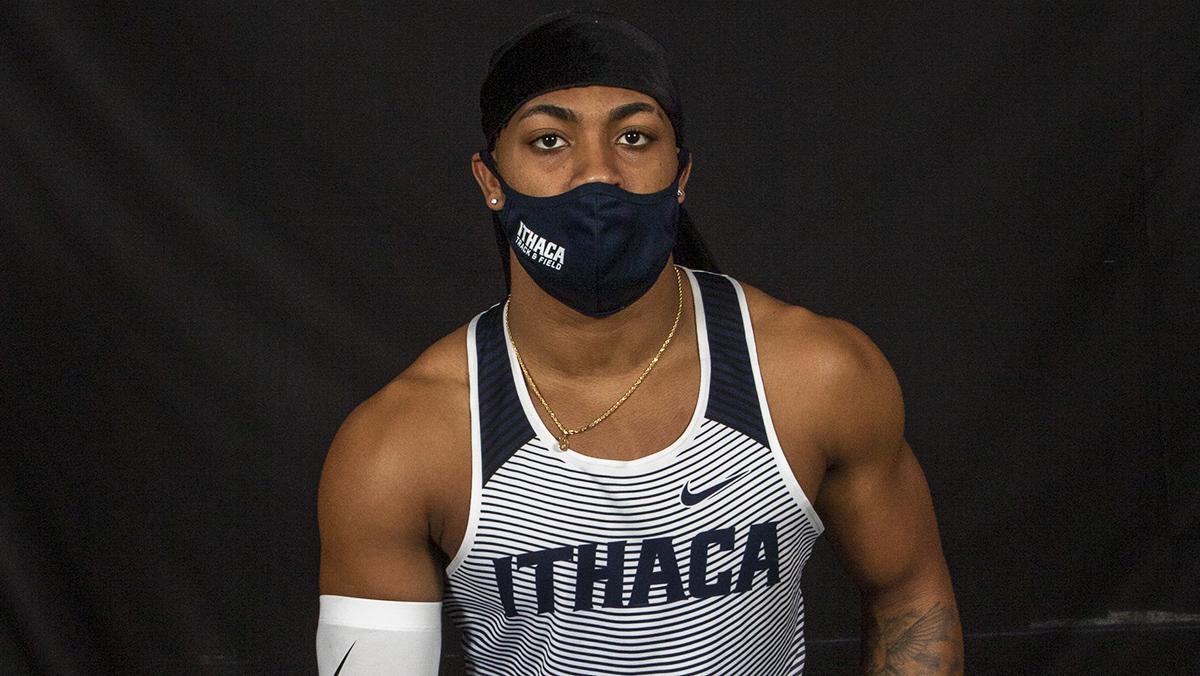 Ash Bailot/The Ithacan
Sophomore Jalen-Leonard Osbourne set a new program record in the 60-meter dash Feb. 5 with a time of 6.78 seconds. It was the fourth time he set the record.
By Ori Grady — Staff Writer
Published: February 17, 2022

Sophomore track and field runner Jalen Leonard-Osbourne holds the Ithaca College program record for the 60-meter dash at 6.78 seconds, which is now tied for first in the country for Division III this season.

He broke his own record in three consecutive weeks against Moravian University at the Nazareth Indoor Conference Challenge Cup and the Bomber Invitational on Feb. 5. During the stretch, he has improved his time by 0.14 seconds. The difference may be small, but his previous program record of 6.92 seconds would not be enough to even put him in the top 20 fastest times this season. Leonard-Osbourne has been scorching the track as of late, but success and competition are not new grounds for the record-breaker.

Leonard-Osbourne expects nothing less than success, which is why he has no expectations for slowing down after tying for the fastest 60-meter dash in the country. He is used to breaking records.

“I expected it and I just keep trying to get better and keep progressing over time,” Leonard-Osbourne said. “My peak isn’t here.”

He knows that he has had to put in the work to achieve the new record, and is soaking in the recent achievement. He is now already looking forward to what’s next and is hungry for more.

“These next couple of meets are stepping stones for me to reach my goals at nationals,” Leonard-Osbourne said. “I’m just proud of myself honestly.”

He said running the 60-meter dash was an easy decision and transition from playing football. During the 2021 season, however, he injured his left wrist, which caused him to miss time in the football season. Since then, Leonard-Osbourne has spent a lot of time in the gym working on lower and upper body strength with fellow sprinter and football teammate, junior Daniel Hutchinson.

Leonard-Osbourne said his time in the weight room has kept him in prime shape, but the process of recovering from a broken wrist has not been all smooth.

“Honestly, that took a toll on me, but keeping my mind right and knowing I had another season while getting back in shape put me back on the right track,” he said.

Leonard-Osbourne also said his success is not just from the amount of hard work he puts into preparing his body and studying the sport. In fact, a lot of his success comes from his extremely competitive and confident spirit. In the three meets he has raced in this season, Leonard-Osbourne has won the event each time.

“[Setting another program record] feels great,” Leonard-Osbourne said. “I put in all the work so I expect nothing less.”

Hutchinson is also like a brother to Leonard-Osborne. Hutchinson said he understands that Leonard-Osbourne’s confidence trickles down to the rest of the team and helps with the overall team success.

“His determination is something that’s like no other, and his competitiveness brings out the best in me,” Hutchinson said. “He wants to see everybody do their best, and he’s always pushing and motivating others to do their best as well, which makes him a well-rounded individual.”

For Hutchinson to say that about his teammate is high praise and it reveals how valuable Leonard-Osbourne is as both a teammate and a leader. Leonard-Osbourne’s strong indoor season so far has played a part in bringing the Bombers to being ranked 15th in the country among NCAA Division III teams.

Jim Nichols, men’s track and field head coach, also said he admires Leonard-Osbourne’s work ethic and his drive to be the best version of himself. He is proud of all the success Leonard-Osbourne is having.

“Jalen has a gift, as far as an athlete with talent, but he’s also working hard at trying to be the best that he can be,” Nichols said. “He’s got a great personality.”

Leonard-Osbourne said his goals are to finish the season as strong as he started. The team has two more meets before the regular season ends, and he wants to go all the way to the end.

“I’m going to try to win the Liberty League 60-meter dash, after that then the All-Atlantic,” he said. “After that, hopefully take it to nationals and see how that goes.”

If he makes it to nationals, Leonard-Osbourne might go face-to-face with Jaylen Grant from the University of Wisconsin-Oshkosh. Grant is the runner currently tied with Leonard-Osbourne for the fastest time in the country, running a 6.78 Dec. 2021 and matching it Jan. 28 and Feb. 12. Grant said he is just looking to get his best time possible, but he likes the competition with Leonard-Osbourne.

“[Leonard-Osbourne] is doing his thing over there [in Ithaca],” Grant said. “And I’m excited to compete against someone when that time presents itself.”

With just under a month to go before the indoor season ends at the Division III Championships, Leonard-Osbourne has plenty more time to break his record again.