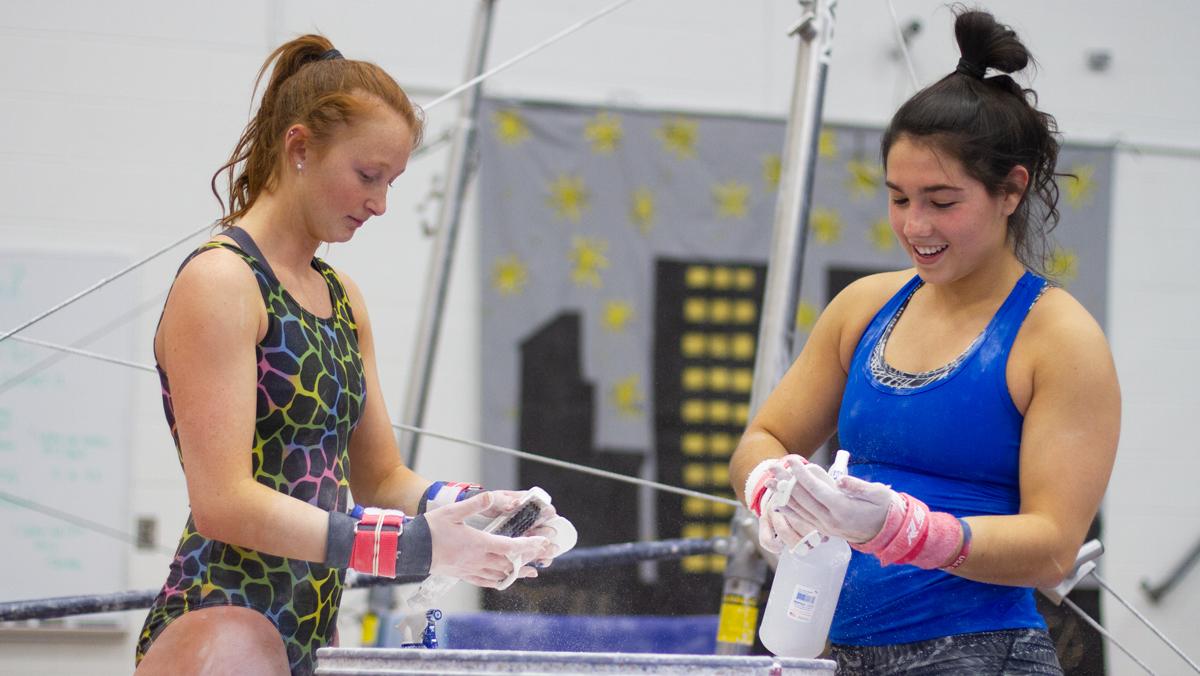 As the Ithaca College gymnastics team was opening its season at a meet with Rhode Island College on Jan. 13, other winter sports at the college had already competed in half of their season.

Gymnastics is classified as a winter sport for NCAA competition, but unlike other winter sports like basketball and wrestling, which start their competitive seasons mid-November, its season begins in the middle of January. The season continues until March, slightly later than the other winter sports and right during the early stages of the spring season.

The shorter season causes the gymnasts to have to compete in approximately 1 meet per week, which is about the same pace as the wrestling, swimming and diving and track and field teams. However, this schedule is a drastic change from youth gymnastics, where most athletes participate for a club program that trains year–round and has meets every three weeks.

The Bombers compete in the National Collegiate Gymnastics Association, which head gymnastics coach Rick Suddaby said is a coaches organization that aims to give Division III gymnasts their own postseason championship. There is currently only a Division I championship for gymnastics, and while Division III gymnasts can qualify, Suddaby said the NCGA tournament gives his team something more realistic to strive for.

“Gymnastics has one NCAA championship tournament and it has all three divisions of competition,” Suddaby said. “We are not big enough as a Division III to have our own championships, so we end up mirroring the Division I season, which does not allow us to count scores before January 6.” 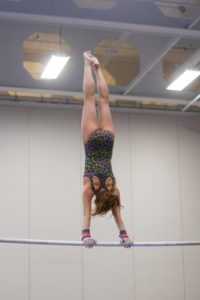 Suddaby said that, for recruiting purposes, it is more beneficial for the conference to stay as close to Division I standards as possible because they will be able to attract gymnasts who are on the cusp of joining a Division I or Division III program and would still be interested in qualifying for the Division I championships.

Sophomore Lauren Hansen competed for the Bombers last season and had a strong first year. She appeared in six meets with five appearances in both the uneven bars and the floor exercise, and she finished with regional qualifying averages in both events. Hansen said the team’s short season was not too challenging for her, since at the club gymnastic level, during high school, she had a busier practice schedule than she does at the college, so she has learned to manage her time.

Hansen also said that while the collegiate gymnastic season can be stressful, the support from older teammates aided her through the process last year, and that she hopes to help her younger teammates adapt.

“The tight schedule isn’t too bad, especially because of all our teammates who have done it before and are here to support you,” Hansen said. “There’s always team activities that we do so there’s not much time to be bored or alone.”

Some team–bonding exercises the team participates in during the year include bowling and trips up to the Syracuse Mall Destiny USA. Hansen said this helped the team develop more chemistry.

While some of the athletes competed for their high school gymnastics teams, all of the team members have also participated in a club gymnastics program that would practice year-round. Suddaby said the club programs will have approximately the same amount of meets per year as the Bombers, but they are spread out over a longer period of time.

“We definitely run a season that is more compact than club gymnastics,” Suddaby said. “If you look at a typical club season they have a meet every three weeks, where we compete weekly. It is a much different pace, and we’ve adapted.”

While the meets are happening at a much quicker pace than the athletes are used to, Suddaby said the South Hill squad tends to practice fewer hours per day than most club programs do.

“Gymnasts have all trained year-round their entire lives and tend to do better when they are busier,” Suddaby said. “They are really motivated and have always done it. Many come in having always trained five hours a day, six days a week. It’s a break when they get here because we are only in the gym for three hours, five days a week. They are very busy, but they have already learned time management skills and don’t know how to waste time.”

Freshman Julia O’Sullivan, who participated in the uneven bars, vault and balance beam during her first meet Jan. 13, said that the team-oriented atmosphere of collegiate gymnastics is a pleasant change from her club gymnastics career.

“I did club for my whole life and that was more individual and more serious,” O’Sullivan said. “Coming here, it is all about having fun and doing it for the team. It has been amazing, and I love it.”

O’Sullivan also noted that she has always wanted to perform her best to give her a chance at winning, but the team scoring aspect of collegiate gymnastics gives every routine even more meaning.

Suddaby said this change of mindset from individual to team-oriented completely alters the nature of the sport. 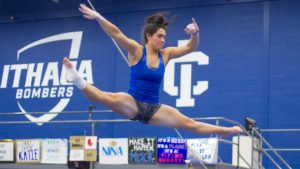 “When they’re here they go through a transition,” Suddaby said. “The focus is now on the team, and we compete six people in each event. In club they can just do the events regardless of who else is competing, but here they have to vie for those six spots on each event.”

Gymnasts also must keep their bodies as healthy as possible during the entire year so they can be in top shape when they must compete. During the competitive portion of the year, they focus less on intense workouts and more on perfecting their craft. However, in the pre- and post-seasons they will put more strain on their bodies. Hansen said that the resource the team has in its athletic training staff is beneficial to staying healthy throughout the entire year.

“The training room is awesome with helping treat injuries,” Hansen said. “In-season is usually just maintaining skills and hitting numbers while the pre-season is more pounding, and injuries tend to happen.”

While most of its fellow winter teams are gearing up toward their league playoffs and hopefully qualifying for the NCAA tournament, the gymnastics team will be trying to figure out who they are as a team and where they need to be. O’Sullivan said the different schedule sets gymnastics apart from the other winter sports and also shows how special the sport is.

“Gymnastics is very different from other winter sports,” O’Sullivan said. “You have to always keep doing it, it’s all just one long season. It’s very difficult, but rewarding.”