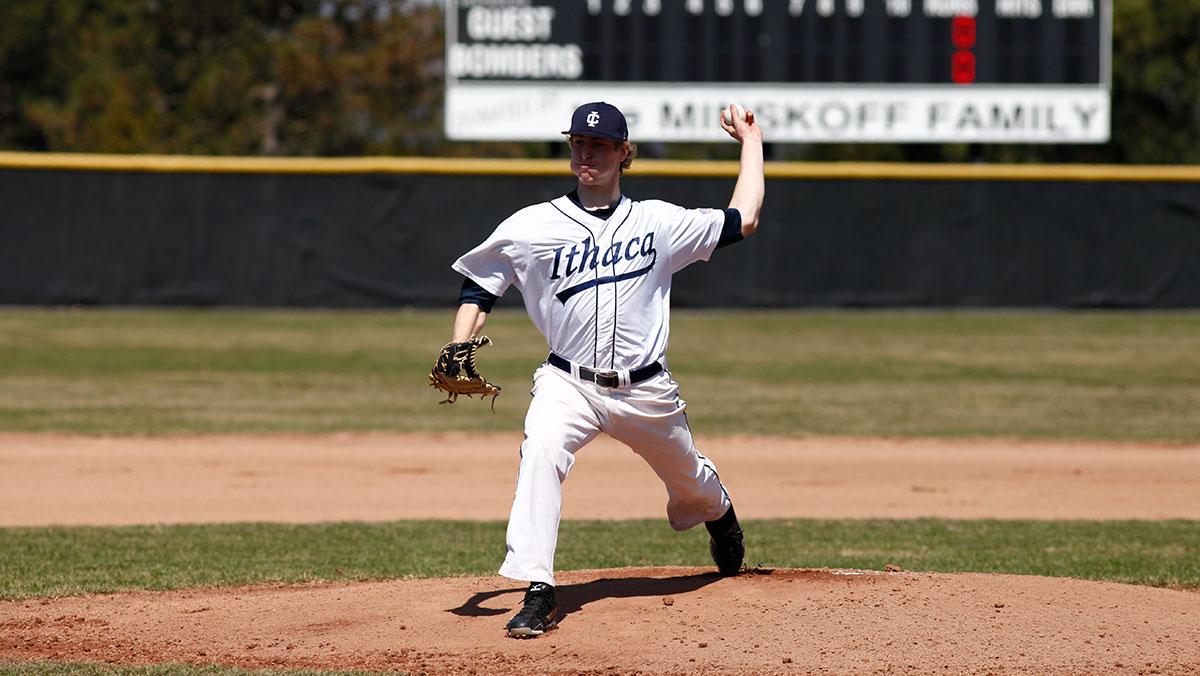 File Photo/The Ithacan
Junior southpaw Benji Parkes delivers a pitch in the baseball squad’s 3–2 victory over Utica College on April 12, 2014. Parkes is the only non-senior in the team’s starting rotation this year.
By Tom Garris — Staff Writer
Published: March 18, 2015

It’s the top of the fourth inning. Senior pitcher Jimmy Wagner, one of three senior pitchers on the baseball team, finds himself up 2–0 in the squad’s final spring training game in Southern California for the season. Wagner, along with his two classmates, has been starting for the Bombers since freshman year. He is on a hot streak so far, already with five strikeouts, with two in this inning. He looks at the sign from his catcher, senior Cooper Belyea, and delivers his pitch. Now it’s all up to Spalding University’s freshman outfielder Robbie Dale.

The upperclassman has the upper hand in this one, as Dale goes down looking. Wagner finished the game after six innings, striking out seven batters along the way. Strong senior pitching led the Bombers to victory, as they improved to 2–5 on the season.

Head coach George Valesente said the experience on the spring trip helped to finalize some of the fielding positions and cement the pitching rotation.

The underclassmen pitchers have big shoes to fill for next season, as this year’s three main starters, seniors John Prendergast, Andrew Sanders and Wagner, will depart from South Hill.

Valesente said he is always looking ahead to ensure the Bombers stay competitive.

“We’re trying to recruit to fill those holes, although we do have some young pitchers who we are cultivating that quite possibly could step up,” he said.

One of the young pitchers is freshman Jimmy Sinopoli, a right-hander out of Jamesville-Dewitt High School in Syracuse, New York. Sinopoli saw his first action for the South Hill squad March 11 against Chapman University when he threw for a third of an inning, giving up three unearned runs and one hit before being removed from the game.

Sinopoli said he wants to move past his first collegiate experience and is ready to come in again when needed.

“It was nerve-racking, the error in the inning didn’t help at all,” Sinopoli said. “So I kind of put that behind, looking forward to the next one I get in, but it was definitely nerve-racking.”

While the outing may have been troubling, Sinopoli said he and the other young pitchers discuss mechanics, having much to learn from the upperclassmen.

“I think the biggest thing they do is — what I’ve noticed down here in California — is we all sit together in the dugout when our pitcher’s out on the mound and we’re talking about how to get hitters out, location of pitches, what pitches to throw at certain times,” he said.

Junior pitcher Benji Parkes, the second man in the Bombers starting rotation, has taken on that leadership role. Last season, he assembled a 3–4 record as a starter with two complete game shutouts.

Parkes said he would jump at the chance to become the team’s ace if need be.

“I did it in high school, I kind of enjoy the role, just because I think I’m a good leader by example, and the more I can kind of demonstrate that on the field I think the better our pitching staff will be on it,” Parkes said.

One pitcher may have to be ready to roll sooner rather than later, as Prendergast, the current ace, has suffered an elbow injury and will be out for an unknown period of time.

Prendergast has been a starter since his first game with the team and led the Bombers in innings pitched and strikeouts in his freshman year. Since then he has only improved, and after a dominant junior year with a 9–1 record and 2.60 earned run average, he was named the Empire 8 and Eastern Collegiate Athletic Conference Upstate Pitcher of the Year.

Given Prendergast’s injury, Parkes said everyone must be ready to head into a game at any point.

“It’s just a lot of being ready to go when you’re called upon, because Coach tells us that you may get in, you may get an inning, you may get 10 innings,” he said. “And this is still a point in the season where he is evaluating everyone. So if you get in there for an inning, if you want to pitch, you have to be ready to roll.”

Another pitcher that is in position to fill the spot for Prendergast is junior Brandon Diorio. Diorio came out of the bullpen for the Bombers in 2014, pitching in 19.2 innings. He landed his first career start March 12 in California against Occidental College. He threw for 5.2 innings while only giving up three runs in the Bombers’ 11–9 win in extra innings.

Diorio said he is ready to take that next step and contribute more to the team in the future.

“Coach Val and I talked about it a little bit, and he mentioned that I might get some starts this year if I can work out what I need to do and get that down, but I’m definitely comfortable with that,” Diorio said. “I mean, I don’t think there is a ‘replacing John [Prendergast],’ but I would definitely feel very good about getting some starts in this year.”

Valesente said he wants to have all of his players ready at a moment’s notice. However, he knows the development of a player is not set in stone.

“Development of pitchers in some instances is a longer, slower process than it is with hitters,” he said. “So it takes a little time, sometimes a year, sometimes two years. Sometimes pitchers are ready to go right away, like John Prendergast was.”

Even though he knows the system well, Valesente said he does not have all of the answers when it comes to managing a baseball team.

“If I had a secret of all that I’d be a pretty well-off individual, but you know I’m always hoping they develop, there’s no question about that,” Valesente said. “I mean I’m always thinking about next year, I’m thinking two years down the road.”