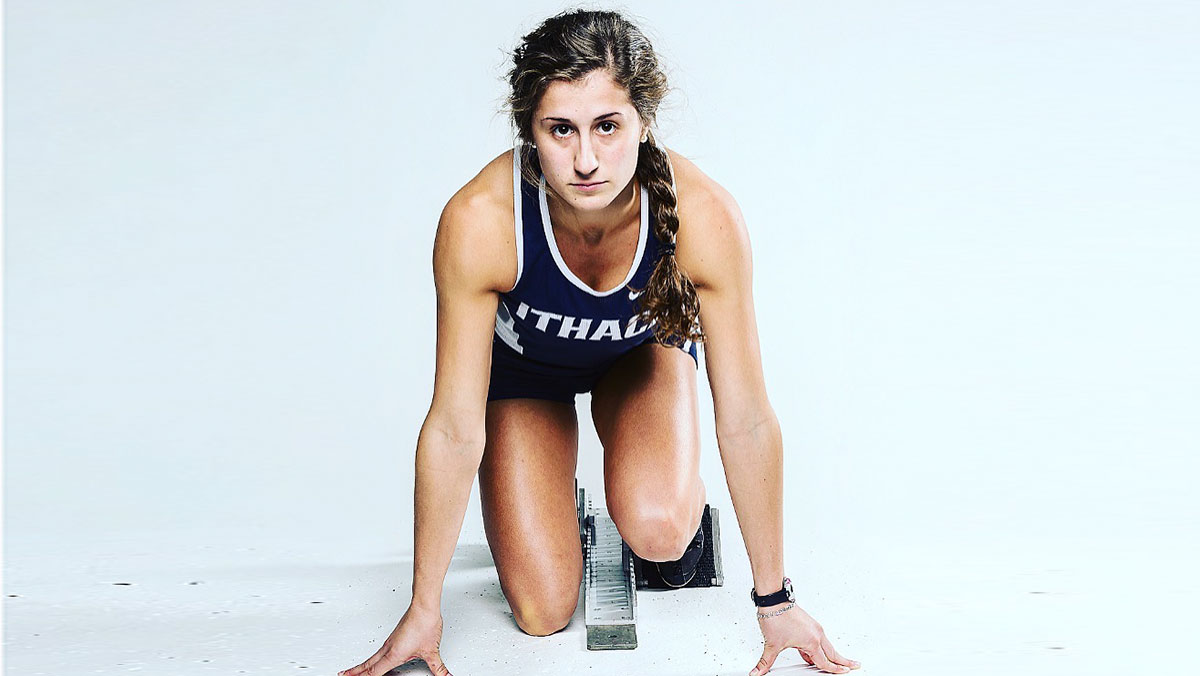 With the sun setting on South Hill one sunny afternoon in late April, sprinter Eliza Dewart, an accelerated fifth-year physical therapy student, is at track and field practice, just like she has been for the past three and a half years. As she completes practice, with her white spikes with a gold Nike check glistening in the sunlight, she’s working as hard as she can to make the most of her last month in a Bomber uniform.

Four years ago, her older sister, Emma Dewart ’12, was in the same spot, in the very same shoes.

Emma joined the Ithaca College track and field team in 2008, where she would go on to become the most decorated runner in the program’s history, picking up 11 All-American honors and a national title in the indoor pentathlon at the 2011 National Championships. 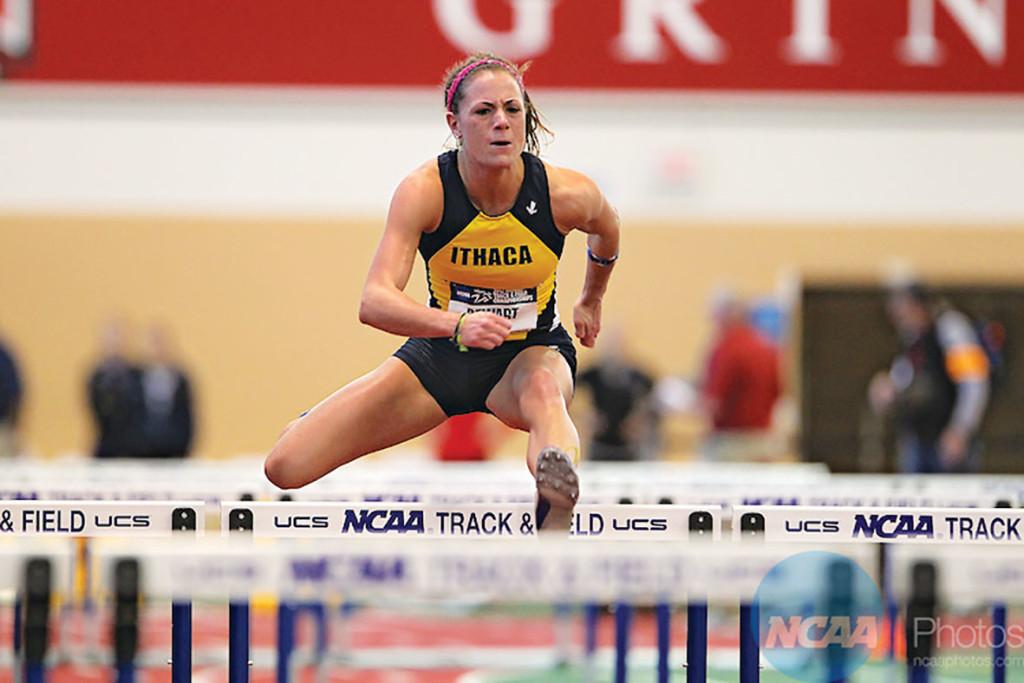 “Everyone always told me I have such big shoes to fill, but we wear the same shoe size, so there weren’t any shoes to fill,” Eliza Dewart said.

Dewart grew up in an athletic family, and she participated in basketball, field hockey and track and field. In the fourth grade, her parents signed her up for the same track and field program as Emma. In the seventh grade, she moved up to varsity track, where she ran for a year alongside her sister.

Dewart said having an older sister on the track and field team inspired her to push herself to her limits and become the best athlete she could be.

“We’ve always been best friends,” Dewart said. “It’s kind of just always been our thing we do together. She’s an incredible athlete, and she really inspires me and motivates me.”

Emma Dewart said having the support of her family, especially her sister, made a big difference in her performance during her time on the team here.

“It was just passed down from our parents that we had to work hard and train hard, and then good things will happen,” Emma Dewart said. “Eliza came to every one of my college meets that she could, and she traveled out to nationals to watch me, so that was pretty awesome.”

“It became a little bit too much to be playing a sport in the fall, winter and spring,” Dewart said. “I had a couple knee injuries, and my doctor kind of swayed me away from playing a contact sport, so track was the next best option.”

Head coach Jennifer Potter said she has enjoyed working with both sisters.

“They’re very different personalities and types of people, but the work ethic that comes with the last name is pretty similar,” Potter said. “They work through issues and are very tough.”

Coming into college, Dewart said, people had high expectations for her because of the things her sister accomplished during her time on the team.

“She’s incredibly blessed as an athlete, and I didn’t expect to do as well as her because we are in completely different events,” Dewart said.

With only a month left of her last season, Dewart is working toward making Nationals for the first time in her career. However, she is currently recovering from what doctors believe is a torn labrum in her hip, something that has drastically altered her training routine. She suffered the injury at the end of March while practicing hurdles.

“I was told by a couple of people that I was done, but I refused to believe that,” Dewart said. “I’ve never had an injury that I haven’t been able to work through, but this one is definitely tripping me up a lot.”

The tear occurs when there is damage to cartilage and tissue in the hip socket. The labrum prevents bones from rubbing against each other and keeps the leg bone in place while also adding stability. When the labrum tears, the cushion that separates the bones is no longer there, and the bones will rub directly against each other.

Since the injury, she has been able to return to practice but said she can only run for as long as she can tolerate the pain. Dewart said the pain is different each day, and she has to evaluate on a day-to-day basis what she can do at practice.

“I’m the kind of athlete that is always trying to do extra because I know that will make me the best possible athlete,” Dewart said. “I’m always doing extra sprinting and cutting my rest in half, and I’m not able to do that. It’s just kind of I hope I make it through the workout today without pain.”

Potter said they have taken an individualized approach to Dewart’s training this season.

“Her volume has been decreased, and we’re doing things based on how she feels versus following the set plan,” Potter said. “With her, it’s day-by-day, how are you feeling, what did you do at work today. If she feels a little better, we can do something a little more aggressive.”

“My career is the first time I’ve ever had to put anything ahead of track, which is pretty scary to do,” Dewart said. “It’s definitely realistic. I need my hip for the rest of my life, but I just refuse to believe I’m done.”

Dewart returned to competition April 16 at the Greyhound Invitational for the first time since the injury. One week later, she was back in top form at the Empire 8 Championships on April 23, where she won the 400-meter and set a personal record in the process.

Right before the competition, Dewart said, she did not know what to expect from her first race back.

“I was really nervous about what would happen when I started to run,” she said. “In the back of my mind I wanted to make sure I was still running at the same level I was right before the injury.”

The injury, which she said will most likely require surgery at the end of the season, has not held her back from making her ultimate goal of qualifying for nationals.

“I just tell myself to tolerate as much as I can until it gets to the point where I run until my legs wear out and they cannot move anymore, and then I know I’m done,” Dewart said. “Nationals is still my goal to get there no matter what it takes.”