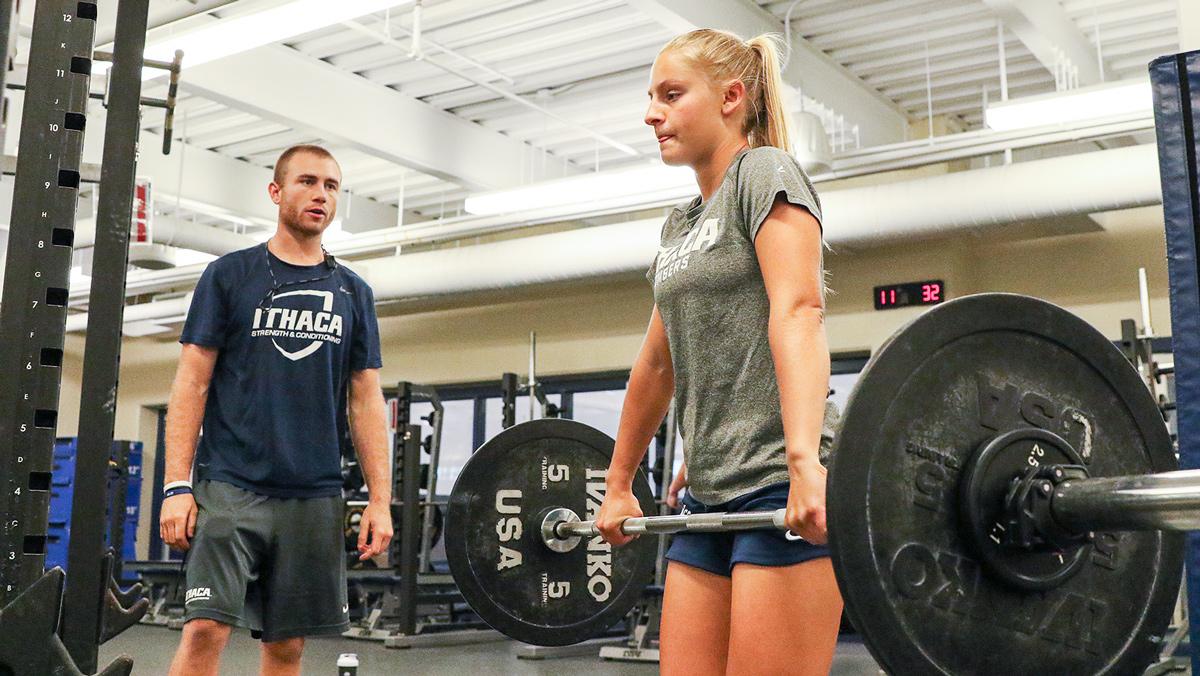 Strength and conditioning programs are made up of a variety of workouts that focus on strengthening different areas of the body. Lower and upper body, core and stability exercises are all included, and the program can vary from day to day or week to week depending on the teams’ needs. Most of the varsity sports teams on South Hill participate in strength and conditioning sessions throughout the year both in and out of season, generally 2–3 times per week.

Graduate assistant coach Dakota Brovero played Division III football at Gettysburg University and graduated in 2018. He works with field hockey, men’s lacrosse and women’s track and field in his second year for the Bombers. Brovero said that at other Division III schools he has encountered, the strength and conditioning programs are run by the head coaches of every sport.

“I think that’s what makes it special,” Brovero said. “It’s that we have the opportunity to have graduate students come in. It’s not just sports coaches who get pulled in different directions. They can focus more on their sports.”

After the spring seasons, Brown and the graduate student coaches, along with every teams’ coaches, evaluate their teams to determine the workout plans for the upcoming year. That way, Brown said, incoming graduate student coaches can focus more on the coaching aspect without having to dive right into creating the program itself. The evaluation includes a number of features to analyze what will be most beneficial for the team in the upcoming season.

“Programming is a multistep process that requires investigation and collaboration,” Brown said. “It starts with a needs analysis, which includes a physiological and movement analysis of the sport, review of injury epidemiology, current research in sport performance and training age of the team.”

Brown also said coaches are included in the process. After the analysis of the team, the coaches move on to implementing the most effective training program.

“From there, you use evidence we have gained from either our own experience or articles we’ve read and put the pieces together,” Brovero said. “So it’s a lot of mixing and matching to make the perfect program.”

“What I like about the workouts is that they are mostly focused on athletics,” Thornton said. “They’re not just to get you ‘big’ or to make you stronger. They make you better in all aspects of your performance.”

Brovero said the graduate student coaching opportunities at the college provide stepping stones to future careers. Brovero is in the exercise and sport sciences program with a concentration in human performance. He said he aspires to work with a Division I football program.

“I definitely think before being a full-time strength coach, the graduate position is the best because it’s kind of being guided on how to best go about my career,” Brovero said. “So it’s definitely nice to know that Coach Brown’s there to help you along the way and you’re not going in completely blind.”

A number of former graduate student coaches from the college have left the program and transitioned smoothly and quickly to new professional roles. Ryan Kelly ’17 was a graduate assistant coach for the Bombers from 2015–17. Kelly is now the head strength and conditioning coach for the Rochester Institute of Technology. Former graduate assistant coach Brittany Krivicich ’18 is now the assistant strength and conditioning coach for Hobart and William Smith Colleges.

Brown said many graduate student coaches work summer internships at other schools, allowing them to gain new ideas and implement them in the programs for the Bombers. Over this past summer, Brovero interned at Villanova University with the football team.

“They have a very different training philosophy than we do here, which isn’t a bad thing, but it was just really cool to learn from them and see a different perspective,” Brovero said. “It’s cool now because I can combine different ideas and bring back something new.”

Senior softball catcher Frankie-Ann McCauley said she appreciates having graduate students as coaches because they are more relatable than a typical coach.

“They are also students and know what our bodies go through during stressful times of the semester,” McCauley said. “They always communicate with us about what we can do to help ourselves push through those strenuous times.”

Thornton said the small age gap between Brovero and the athletes makes the environment easier to enjoy.

“I think the fact that he’s younger is definitely helpful because not only will he not hate our music, but he can enjoy us a little bit more than maybe an older guy would,” Thornton said. “He’s more educated in the more modern methods of working out, whereas older guys have notions in their minds that they’ve had forever.”

Brown said the graduate students are so successful with Ithaca College’s athletic teams because they constantly bring new ideas and passion to their training programs.

“Every year, there’s new students, new opportunities, new enthusiasm and new energy,” Brown said. “I learn as much from them as they learn from me. They bring different experiences to the table.”