Rob Henry & David Dorsey
Ithaca College freshman Grant Kobal talks about his passion for mixed martial arts and how he balances his training with his studies.
By Caitie Ihrig — Staff Writer
Published: April 20, 2016

At the age of 14, freshman Grant Kabol had just finished playing basketball when he and his friends decided to walk around Manhattan. All of a sudden, a group of people came up to them and began asking Kabol questions about the time and if they could see the front of his phone to make sure he was telling the truth. Not even 20 seconds after Kabol and his friends began walking away, he was attacked, and his phone was stolen. Since that incident, his mother wanted him to learn Mixed Martial Arts, a sport combining several self-defense techniques.

Kabol currently trains with James Pfrehm, assistant professor of German and linguistics. Pfrehm began doing MMA in September 2015, when he saw someone training in a gym in Cortland. From there, he quit his gym membership and joined United Athletics, where he now trains with Kabol. 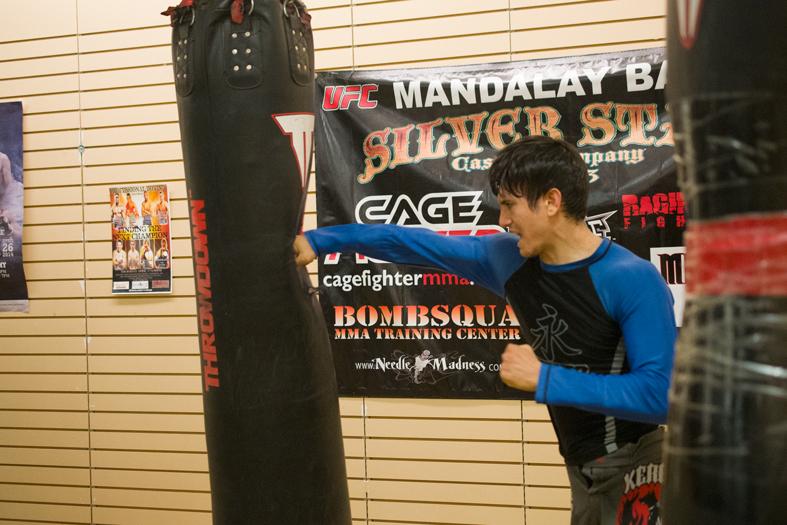 MMA originated in the Ancient Olympics in Greece when a combat sport called pankration was formed.

MMA in the Unites States dates back to the 1700s, but the Ultimate Fighting Championship organization wasn’t created until 200 years later in the U.S.

While it grew as a sport due to its minimal rules, it became banned in New York in 1997, when the safety of participants became a problem. However, on April 14, New York passed a bill to legalize professional MMA.

Sophomore Guillaume Gentil, who participates in MMA fighting at Ithaca College, said he believes the New York ban comes from the stigma behind the sport.

“People believe that if you want to do that, then you are going to want to hurt other people, but it has nothing to do with it,” Gentil said. “You do it because you are just playing a game, not to learn to beat people up. Especially because it is a sport that has rules, and a lot of those rules are created to minimize lasting damage.”

Kabol, who trained at the Renzo Gracie Academy in Manhattan before he came to Ithaca, said he believes allowing professional MMA in New York will be a great opportunity for everyone.

“It’s great that professional MMA is now legal in New York, and it will generate a lot of revenue,” Kabol said. “In addition, New York natives who haven’t had the privilege of fighting in their hometown will finally have that opportunity.”

To succeed in the MMA, Kabol said the athlete needs to excel at different styles, which include Jujitsu, kickboxing, regular boxing, cage fighting and wrestling.

To become an all-around fighter, Kabol and Pfrehm know that what they do in practice will have a huge impact on their fight.

“Probably three-fourths of what we do in practice is repetition of technique,” Pfrehm said. “Not power, not trying to knock the other person out. It’s simply working on technique and repeating the forms and trying to make it second nature or reflex when you are in the ring so that you don’t think about what you are doing and just react.”

Both Kabol and Pfrehm train six days a week, for a few hours a day. Kabol trains solely at United Athletics, while Pfrehm works out at both the Fitness Center and United Athletics.

Practices begin with a warmup, and then they move into mitt work, which includes hitting and kicking pads. Monday through Friday, they then practice technique for the rest of practice, and Saturday, they do team practice, where they mimic real fights.

When it reaches the halfway point until the fight, the athletes have to push themselves so they can drill those techniques into their head and make them a reflex. 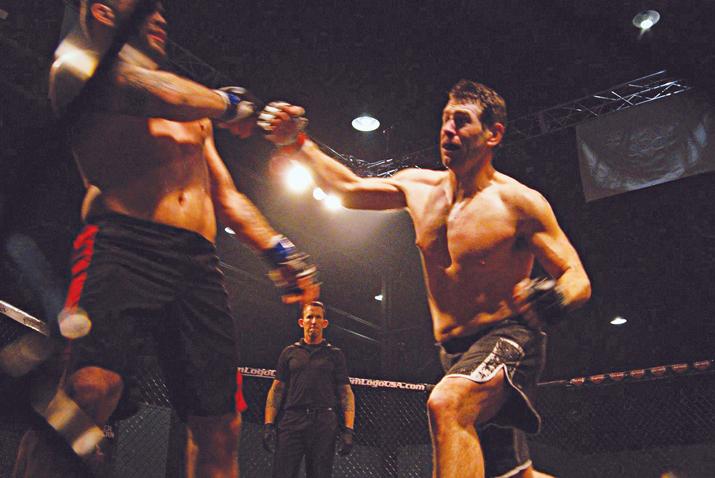 As it gets closer to the fight, the athletes will let their bodies wind down by not practicing and pushing themselves as much. That allows them to recover before having to use all of their energy during the fight.

When Kabol is waiting to be called into the ring, he said, he gets nervous and thinks about whether he has prepared enough.

“I question if I really want to be doing this, did I get in the right training, did I do enough, but then I make the walk, and I hear that music, and I’m just ready to go,” Kabol said.

Pfrehm, who last competed in January, said he believes fighting during the school year is unprofessional because he almost broke his nose. Due to this, he is currently preparing for his next fight, which won’t take place until the summer.

Pfrehm said he enjoys fighting because it helps to clear his mind.

“I like the thought of knowing you are about to go into combat and trying to calm your mind and to keep grounded and to keep a mind towards what you have learned, without thinking too much about it,” Pfrehm said.

Gentil said if athletes are able to do that — calm their nerves and play mind games with their opponent — they will have a greater chance of winning their match. One of these mind games in boxing involves switching up their stance so their opponents have to think twice about which stance they are going to use. This then causes the opponents to become confused because they have even less of an idea of which arm or leg will be coming at them.

For Kabol, the mind games along with how he prepares for his fights have helped him greatly, as he is undefeated with a record of 2–0. Kabol is currently training for his third fight of his career, which will take place April 30.