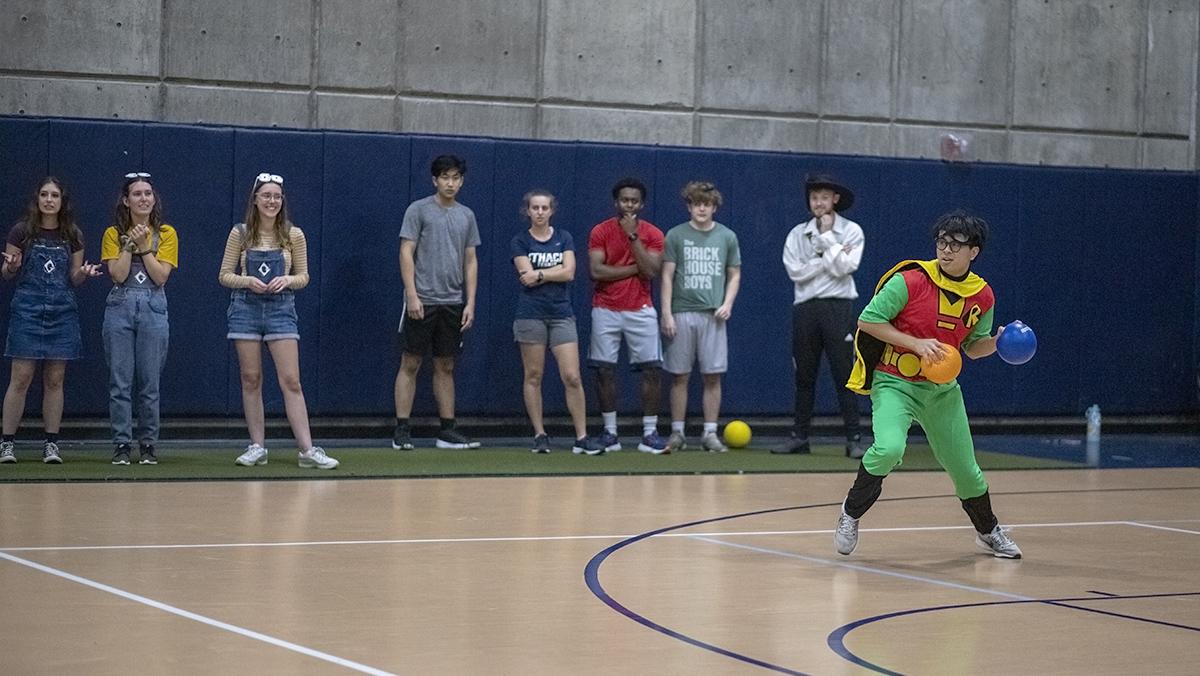 Maddy Tanzman/The Ithacan
BomberTHON is a student run organization that hosts dance marathons to benefit children’s hospitals local to the community each year. In the lead-up to the big dance marathon set to take place in April 2023, the organization hosted a dodgeball tournament to raise awareness for its cause, the Upstate Golisano Children’s Hospital.
By Tess Ferguson — Staff Writer
Published: October 26, 2022

On opposite sides of the Ithaca College Fitness Center’s south gymnasium stood Robin, Batman’s trusty sidekick, and a person dressed as a jar of salsa. There was less than a minute of competition left and only two balls remaining.

The gym grew silent in anticipation as the pair shuffled across their respective baselines, sizing each other up as the final two standing in the first match of the evening. It was the salsa that made the first move, only narrowly missing his opponent, but Robin ultimately came out on top, catching the jar off guard on his follow-through. The gym fell into hysterics, and there were still 19 more games to go.

Founded on campus in 2019, the Ithaca College BomberTHON is a student-led organization that joins a network of over two hundred colleges and universities hosting dance marathons to benefit Children’s Miracle Network Hospitals across the country. Specifically, the college’s chapter is working to support the Upstate Golisano Children’s Hospital in Syracuse.

Outside of the dance marathon that will take place in April 2023, BomberTHON is making an effort to host additional events that will promote fundraising to contribute to its cause year-round. For its first event this semester, the organization hosted its first-ever Halloween Dodgeball Tournament on Oct. 24.

Sophomore Ellie Chelnick, the finance and operations chair on BomberTHON’s executive board, was the mind behind the festively themed event. A self-proclaimed “ideas person” in terms of her role as an officer, Chelnick said she was looking forward to hosting the tournament this fall.

“When I pitched this event to the board, I really just explained how much fun it would be,” Chelnick said. “It’s super practical, and it’s a really easy way to promote our cause.”

The event hosted 12 eight-person, costume-clad teams,and each person was charged $5 to participate. Chelnick said all of the money collected will be donated to Upstate Golisano Children’s Hospital to support families in need.

“Events like these are really important because they’re low cost for us,” Chelnick said. “When people signed up for the tournament, it was not only because they wanted to have fun, but because they were willing to give a little bit to our cause.”

Junior Sophia Testani, the president of the campus chapter, said Chelnick, a member of the women’s tennis team, came up with the idea in hopes to target BomberTHON’s largest audience: student-athletes.

“[Chelnick] is always coming up with these awesome ideas for promotional events, and we knew that [the Student-Athlete Advisory Committee] hosted a dodgeball tournament last year that the athletic teams went nuts for,” Testani said. “The rest of the board really loved the idea, so we started working on it right away.”

Chelnick explained that networking with both varsity and club sports teams is an essential piece of running a successful event for BomberTHON, and the dodgeball tournament was no different.

“Outreach is a huge part of setting up an event like this,” Chelnick said. “Athletes already don’t have much time on their hands, so you need to be able to engage and show why they should want to be a part of it.”

True to Chelnick’s efforts, the organization was able to host a 12-seed double-elimination tournament bracket including players from both the men’s and women’s swim and dive teams, the softball team and the golf team. Among the college’s sports teams were other students just looking for a good time, including a team of students from a Sport and Exercise Psychology course, who were offered extra credit for their participation.

In addition to the fun that comes with hosting and participating in campus events, Testani said that her leadership role allows her the perfect opportunity to continue supporting a cause extremely personal to her. Alongside her fellow officers, she intends on hosting events similar to the dodgeball tournament all year long.

“My high school had an annual dance marathon, and when I learned that there’s one here on campus as well, my college decision was a no-brainer,” Testani said. “My own mom has cancer, so the cause is really important to me and I knew that it was something that I wanted to stay involved in.”

Testani explained that all of the fundraising done over the course of the academic year works to cover general wish lists for families with children receiving treatment at the Upstate Golisano Children’s Hospital in Syracuse. Many of these wish lists include commodities like gas cards, coins for laundry and free or discounted meal vouchers.

In addition to material goods, Testani also said that the hospital is in the process of developing more accessible mental health services for the 22 counties that it serves in upstate New York.

Sophomore Preston Tompkins, a tournament participant, said that regardless of how his team performed in competition, which ended up losing in the quarterfinals, he largely felt more fortunate to be able to support BomberTHON’s message.

“You can only win in this scenario,” Tompkins said. “Even if you lose [the tournament], you’re still contributing to a much larger cause. You’re still a better person at the end of the day.”

Clad in full swashbuckling uniform, Tompkins said that when Chelnick approached him about signing up for the tournament, the idea of dodgeball in Halloween costumes was an opportunity that he could not pass up.

“Of course I just happened to have a pirate shirt and a feathered hat, so was I supposed to let those go to waste?” Tompkins said. “It makes the event just that much more fun.”

The engagement factors of the event were not only appealing in terms of festivity; the event also allowed participating athletes to connect with each other outside of BomberTHON’s annual dance marathon.

Sophomore Anna Cornell, a tournament participant and member of the softball team, said her team took the tournament as an opportunity to represent athletics on campus and her program’s involvement in service projects.

“The softball team has always been involved with BomberTHON and the fact that they’re putting on more events now makes that even cooler,” Cornell said. “[Testani] is always super adamant about getting people involved, so we were happy to participate.”

Cornell said that as BomberTHON continues to expand its cause and raise awareness across campus, the softball team will always be there to support it.

“The Student-Athlete Advisory Committee has a ‘Bombers supporting Bombers’ initiative, and I’m not really sure what BomberTHON has planned, but we’ll definitely show up for it and and make sure to promote it with our team,” Cornell said.

When the tournament eventually drew to a close, it was a squad of members of the men’s swim and dive team that came out on top, playing five undefeated matches to take home the championship title. With the help of its participants, BomberTHON was able to fundraise $330 that will go directly to families in need under the care of Upstate Golisano Children’s Hospital.

As she reflected on the event that she helped to orchestrate, Chelnick was largely grateful that it happened at all.

“We really put a lot of effort into these things, so it was especially cool to see how many people showed up and wanted to participate,” Chelnick said. “It means so much to our club and our cause.”