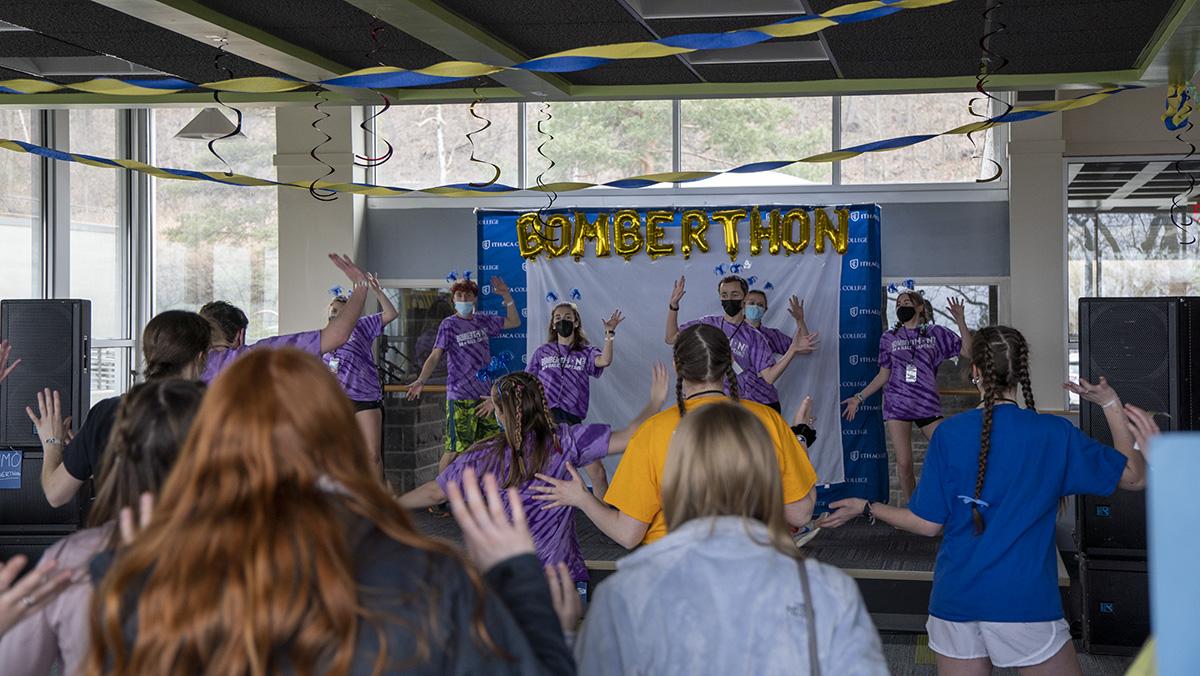 As Ithaca College students from all over the college gathered in Towers Marketplace on April 10, BomberTHON began its third annual dance marathon. Dancers, singers, student-athletes and others joined in on the fundraiser, spending a relaxed afternoon dancing and participating in games.

BomberTHON is a student-run organization that hosts the dance marathon every year to raise money for children with cancer. The proceeds go to Upstate Golisano Children’s Hospital, a Miracle Network Hospital in Syracuse, New York. It is a part of the Children’s Miracle Network Dance Marathon, which is a national movement in which students raise money for local children’s hospitals. After hosting the event online last year because of the COVID-19 pandemic, it was able to return to an in–person gathering for the first time since 2019. The event was a total of five hours long, running from 10 a.m. to 3 p.m. This is the third year of the BomberTHON dance marathon event, with the first one being held in 2019, but it is the second time the event was held in person.

The fundraiser included the participation of 19 Bombers athletics teams and six other campus organizations, including the BomberTHON executive board. This year’s event included many performances from on–campus groups, including Ithacappella, Unbound, Defy Dance Company, Pulse Hip Hop and Premium Blend. There was also a raffle, “Pie the EBoard,” Disney Karaoke and appearances by patients from the Upstate Golisano Children’s Hospital.

BomberTHON raised $34,221.92 last year, and entered this fundraising period with a goal of $30,000. For the third straight year of the event, the organization surpassed its fundraising goal, announcing at the conclusion of the dance marathon that $31,220.22 was raised.

At the event, attendees had the opportunity to dance and play games like cornhole and Jenga. It was a rather relaxed environment, in which those at the event gathered for an enjoyable afternoon to support an important cause.

BomberTHON’s president, senior Maddy Blomkvist said much preparation goes into planning BomberTHON’s dance marathon event. This included getting athletes and clubs to participate and keeping them involved throughout the year.

“That is really something we wanted to focus on this year, getting athletics involved this year because they are so prominent on campus,” Blomkvist said. “The recruiting that takes place with that, the actual planning of the event logistically, keeping in contact with people throughout the year so they stay engaged and continue fundraising. … It takes a village. But I’m very grateful to have the team I have, they’re absolutely incredible, and they’ve blown me away.”

Blomkvist also said it is very important for the organization to raise funding for this cause.

“It is such an amazing cause,” Blomkvist said. “Knowing that the money we raise is going directly toward giving kids the life-changing pediatric care that they can’t receive in their hometown, means so much.”

In order to reach and surpass the $30,000 goal set for the year, buy-ins from athletes participating in the fundraising were necessary. The dance marathon event couldn’t have come at a more convenient time, because this past week was also Division III Week across the NCAA. The week celebrated athletes on South Hill and included a “Spare Change Drive” and dodgeball tournament, among other activities. The week culminated with the BomberTHON dance marathon event. The event was originally scheduled for Feb. 26, but was rescheduled to April 10 because of the COVID-19 pandemic.

Senior Caitlin McGrinder, vice president of BomberTHON, is also a member of the college’s golf team. McGrinder said she believes the college did a great job showing its appreciation for its athletes during the week.

McGrinder also said that getting athletes to fundraise for BomberTHON this year was easier than in past years, and she gave credit to SAAC for assisting BomberTHON’s executive board in achieving that goal.

“This year it has been a lot better, it had been a little bit more difficult in the past, just because of the lack of knowledge of what [BomberTHON] does, and what we do,” McGrinder said. “This year we have partnered with athletics, especially Ithaca College SAAC, they’ve been really great with helping us get the teams involved.”

One athlete who took part in the fundraising for BomberTHON is freshman women’s tennis member Ellie Chelnick. Chelnick said it has been important to her to fundraise for children with cancer through BomberTHON.

“It’s really cool to have an opportunity to, you know, be part of such a great cause,” Chelnick said. “It feels good, it feels good in the heart, knowing you’re doing something that’s going to be beneficial to others.”

Chelnick set and surpassed her $500 goal, raising $554 over the course of the fundraising, which was the eighth highest among individual fundraisers. The fundraising process began in July 2021, and culminated with the dance marathon. The goals for each athlete could be seen on the event’s website. Many athletes also attended the dance marathon event to support the cause and celebrate all the hard work they put in during the fundraising period.

Several teams also collaborated to raise funding for the event. The college’s women’s lacrosse team raised the most money out of all the sports teams, collecting a total of $3,712. The gymnastics team collected the second-most funding, raising a total of $1,764, while the men’s basketball team followed with a total of $1,351.90.

“It’s an awesome event. I think it’s really important that we get a lot of different people from the Ithaca community to contribute, and come to this event,” senior Owen Johnstone, men’s soccer player, said. “As an athlete, it is nice, we can bring our whole team, spread awareness. We do have a voice on campus, so it’s good to spread that and get everyone we can out here.”

Senior Alyssa Spady, women’s basketball player, said she enjoyed having the opportunity to participate in an event that allowed the college’s sports teams to have an impact.

“I think it’s a great cause,” Spady said. “I’ve been part of THON’s in the past, so to be able to do it at the [Ithaca College] level, and be involved with athletics too, it’s kind of cool.”