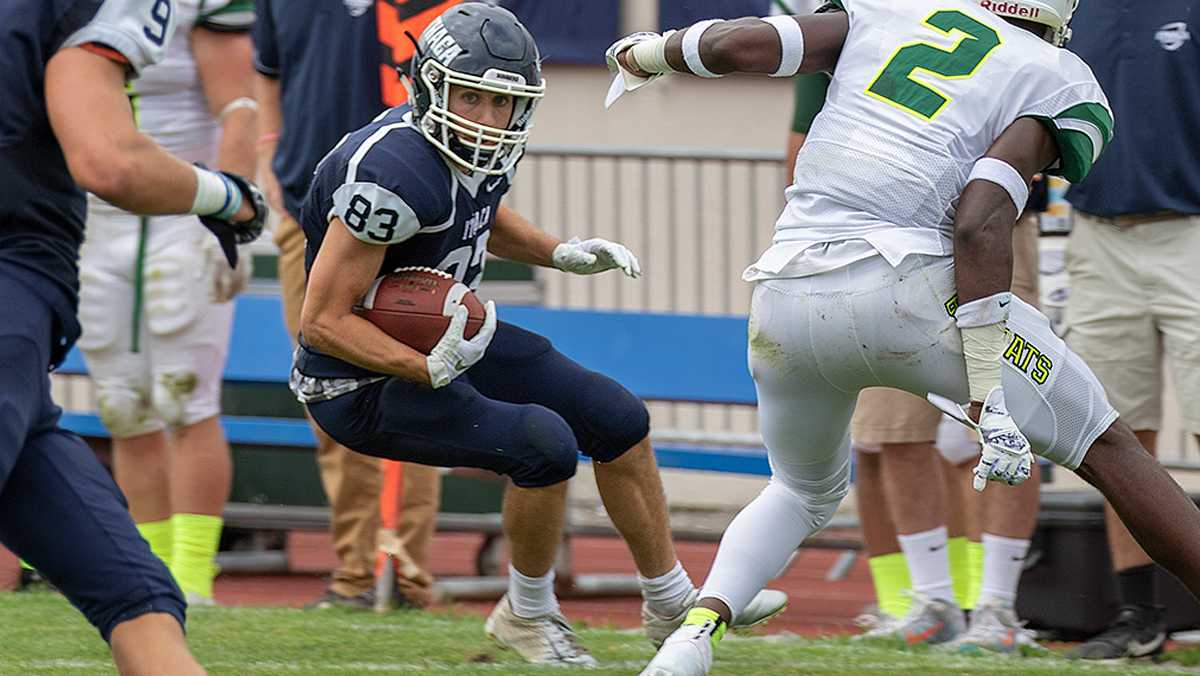 During the 59th annual Cortaca Jug last season, then-freshman wide receiver Andrew Vito caught a touchdown pass from then-freshman quarterback Wahid Nabi to extend the Bombers’ lead 27–6 for the third touchdown of his rookie season — a critical play in arguably the biggest game in the Bombers’ season.

So far this season, he is currently No. 5 in receiving yards for the Liberty League Conference standings. He is also third in the conference with total receptions with 45. This year, he is in the Top 33 for rushing yards where last year, he was not listed in the top 50 for that category. As a sophomore, Vito is the team’s No. 2 wide receiver and is looking to improve throughout the rest of his collegiate career.

Vito said playing for the Ithaca College’s football program has given him the chance to grow as a wide receiver.

“Being a part of this team has meant everything,” Vito said. “All these guys have treated me with so much respect. They’ve taken me in. It’s a great place to be.”

Before deciding to attend the college, Vito looked into Johns Hopkins University and hoped to attend but could not get in.

However, he did not let this stop him from continuing his college search academically and athletically. Despite not being able to attend Johns Hopkins University, Vito said, he built a good relationship with Michael Toerper who, at the time, coached the wide receivers there. Luckily, in February 2017, Toerper moved to the coaching staff here on South Hill.

“When [Coach Toerper] came over [to Ithaca] he and Coach Swanstrom, their philosophies and their personalities kind of fit who I am, and I thought academically this would be a great place for me,” Vito said.

Coming in as a freshman in the 2017–18 season, Vito played in his first career game against SUNY Brockport on Sept. 9. He finished the game with three receptions for 47 yards. Throughout his first season, he continued to improve, which helped the team claim their victory at Cortaca last year when he had 116 yards on 10 receptions and a touchdown during the game.

To prepare for his second season on the team, Vito said, he decided to focus on improving his weaknesses, which included putting on weight, building speed and maturing from his freshman year of college. He did this by keeping with his current workout plan and improving his diet with guidance from the football staff.

Vito upped his game in the 2018–19 opener against Saint Vincent College on Sept. 1. He improved from his freshman year opener with five receptions for 98 yards.

“He brings an edge to the team,” junior wide receiver Will Gladney said. “He’s hardworking and just does whatever it takes to win.”

“He’s a big–time playmaker, wide receiver coach Reece Petty said. “He’s a really good deep threat on the field. He’s done a lot for us in that aspect. He just brings a mentality of toughness, as well, to the team.”

Vito said being a part of the team and its atmosphere is what is most important to him.

“If one person doesn’t do their job the team can’t function — it’s a team sport,” Vito said. “Everyone loves each other. It’s a brotherhood.”

As a sophomore and a second-year starter, he said, he is improving on his leadership within the team and working toward a successful season. He said he is hoping the team can finish the season strong and win as many games as possible.

“It’s not being the biggest guy — it’s being the most prepared and having that confidence,” Vito said. “I want to make the playoffs, win Cortaca … definitely make a run. That’d be nice.”