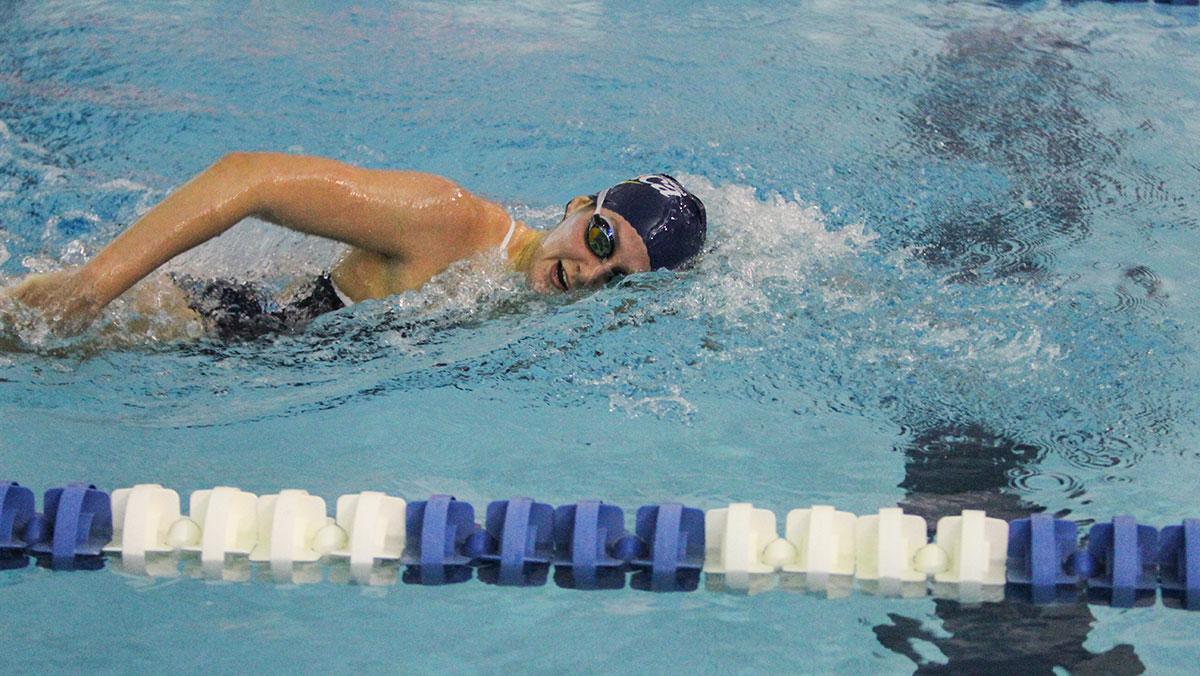 Since her first dive into the pool in the Athletics and Events Center, senior Lake Duffy has splashed into the record books.

Duffy earned five All-Empire 8 honors, including an Empire 8 and Upper New York State Collegiate Swimming Association title in the 50-yard freestyle her freshman year. The following season, she was a five-time Empire 8 runner-up and earned six all-state honors. She was a part of the 200-yard freestyle relay team that currently holds an Ithaca College team record.

During her junior season, she only competed in half the season, as she traveled to Italy to study abroad for the Spring 2016 semester. Now, as a senior, Duffy is nearing two top individual spots in the Bombers’ team records. She currently owns the second-fastest 50-yard freestyle time in school history with a best time of 23.47 seconds and has the fifth–best time with 52.72 in the 100-yard freestyle. Her 50-yard freestyle time also earned her an NCAA National Championship B cut and a first-place finish at the Bomber Invite on Dec. 2.

Assistant Sports Editor Lauren Murray spoke with Duffy about her accomplishments thus far, how she prepared for this season after being abroad and what her goals are for her final season as a Bomber.

Lauren Murray: What were your goals coming into the season?

Lake Duffy: Definitely nationals. Last year, my season got cut short because I studied abroad. I had a really good first season, so it was kind of bittersweet leaving for abroad. But with that, I was just so motivated this season, and I just want to go to nationals with my teammates.

LM: When you studied abroad last year, did you train when you were studying in Italy? If so, how? If not, what did you do to prepare for the season?

LD: I did not do anything in Italy. I just ate pizza pretty much. I tried to enjoy myself. I would run occasionally, but nothing that crazy. When I got back, I did CrossFit, and I’m pretty sure that is what prepared me for this season because I’ve never felt so strong coming into the swim season before. I know CrossFit gave me so much strength, and I just had to get my endurance back with swimming, so cross-fit was really helpful.

LM: Now halfway through the season, what do you hope to accomplish in the second half?

LD: Just seeing all my teammates drop their times as well as my time, and then hopefully because the medley relay has a really good time right now, and it’s kind of up in the air, like 80 percent chance likely that we will go to nationals. But I hope at states we can drop our times even more, and then we can really secure our spot there because then if you’re a B cut for a different event, then you can swim that if you make it. In a relay, you get invited, so then you can swim like the 50 and the 100 and then like the other girls on my relay team swim their best as well. So it’s like the relay is the golden ticket into nationals.

LM: What is your favorite memory from the past four years?

LD: I don’t know if I have one memory. Basically, living with my whole swim team. We make the greatest memories all the time. Definitely this past weekend, this meet was so huge for everyone, and it was just so exciting, and everyone did very, very well. But also, every day we make memories. It’s just so fun on our swim team, and we’re such a huge family. I love going to practice and being with my team.

The men’s and women’s swimming and diving teams participated in a tri-meet against Hartwick College and SUNY Geneseo on Nov. 21.