Kendyl Bennett, Connor Duffy, Alex Klein
Senior Adam Zelehowsky dives into the pool during practice Oct. 11 in the Athletics and Events Center. He was diagnosed with atrial fibrillation, a heart condition in which the upper chambers of the heart beat irregularly in October, 2014.
By Vinica Weiss — Senior Writer
Published: October 19, 2016

Since the age of 6, when his passion for swimming surfaced, senior Adam Zelehowsky has found comfort in the pool. After a busy day, when he sinks into the calm water that for so long has put him at ease, he feels recharged. He’s relaxed, consumed by his own thoughts, completely and utterly focused.

Yet two years ago, in October, with the first competition just days away and midterms having just passed, he jumped into the water, and something felt unusual. For some reason, upon entering the pool, he felt colder than normal. Then, as he began warming up, his heart rate seemed abnormally high.

Quickly, he got out of the water and went to go see the trainers to determine what exactly was happening. Soon enough, he found himself in an ambulance heading to the hospital. It was then that Zelehowsky was diagnosed with atrial fibrillation, a heart condition in which the upper chambers of the heart beat irregularly.

According the to the American Heart Association, at least 2.7 million Americans live with atrial fibrillation. While atrial fibrillation generally is not life–threatening, and not nearly as serious as other heart conditions, it can still lead to complications like blood clots, stroke and heart failure.

“At the time, it was terrifying because I had no idea what was going on,” Zelehowsky said. “The doctors at the hospital were telling me all these terrible things, like I wasn’t ever going to be able to train again, that this shouldn’t be happening to me. They just didn’t expect me as an athlete, being this young, to have that sort of heart condition.”

Despite learning he had this condition, Zelehowsky continued to swim throughout the 2014–15 season, which he said might not have been wise, upon reflection. His heart was still acting up, and his training was suffering. He ended up in the hospital again during one of his meets. On top of that, he would still practice for hours, go out and have fun with his friends, and not get enough sleep.

During the conference championship in February 2015, Zelehowsky collapsed on the pool deck and was taken to the hospital after his heartbeat reached more than 240 beats per minute. He said that when he practices, his heart rate is normally 120–160 beats per minute, while it is typically 180–200 beats per minute when he is racing.

“If I’m training, it will hit 120 beats per minute pretty easily, and that would feel good,” Zelehowsky said. “But if I was going through an episode, I would hit that same heart rate, but I would be short of breath — I wouldn’t be able to move very well. My heart would be going crazy.” 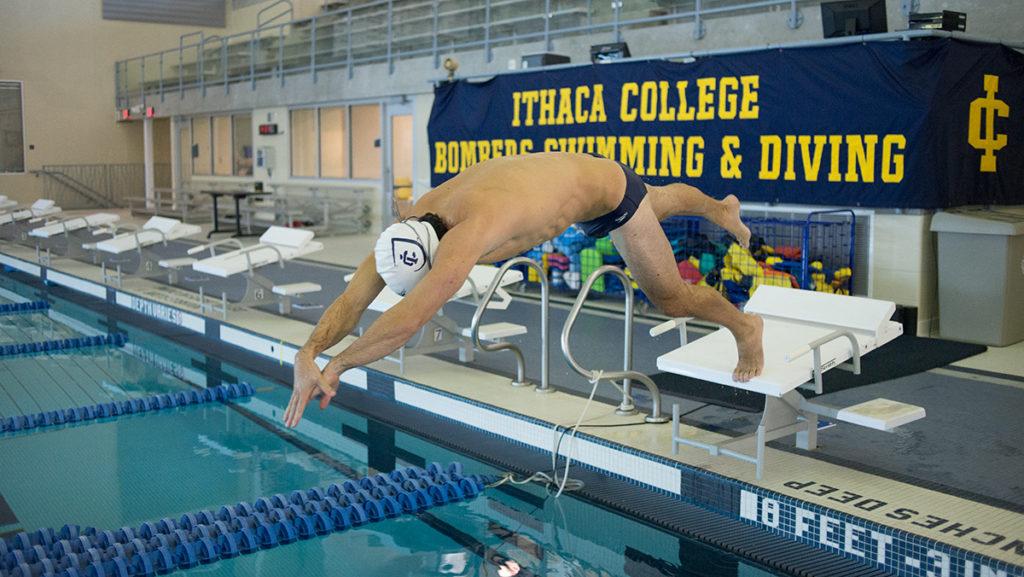 Senior Adam Zelehowsky dives into the pool during practice Oct. 11 in the Athletics and Events Center. FERNANDO FERRAZ/THE ITHACAN

After much thought, he decided to take the 2015–16 year off from swimming altogether so that he could improve his routine. At that point, Zelehowsky, a biology major, also knew he would be spending a fifth year at the college to take more classes and do some research, meaning he had one more year of eligibility.

During his time with the Bombers, Zelehowsky has found plenty of success in the pool. In his 2012–13 season, he earned Rookie of the Year honors, and he took the Empire 8 Swimmer of the Year title the following year in 2013–14. He is also a school record holder and an All-American.

Kevin Markwardt, men’s swimming head coach, said there is no doubt that Zelehowsky’s taking last year off impacted the team but that in the long run, the decision was in Zelehowsky’s best interest.

“I had planned on him swimming, and I had the team — where we were and what we were going to do as a team — with him as part of it,” Markwardt said. “Taking him out of the equation honestly pulled the wind out of my sails. But it was his proposal: He came to me, and I just wanted to be supportive of him, whatever decision he wanted to make.”

Zelehowsky said he primarily focused on sleeping and eating habits during his time off, and he began to train on his own since NCAA rules stated he could not train with the team.

Before his heart condition, Zelehowsky said, he would normally go to sleep around 2 a.m. — after going out with friends and procrastinating on homework — and then have weight training at 6 a.m. In terms of his diet, he would typically eat unhealthy items, including chicken patties and french fries.

Now, Zelehowsky said, he gets at least eight hours of sleep a day and keeps his sodium levels low and potassium levels high. This means he is eating a lot of fruit, at least four to five servings a day, and a lot of grilled chicken and fish. Before he swims, he also makes sure to take vitamins, including vitamin C and D.

When he started training again, Zelehowsky said, he began with weight training and would try to keep his heart rate low. He eventually moved on to bigger weights but still maintained a low heart rate. This allowed him to build more muscle and endurance. Then, he began to slowly switch to a nonswimming cardio routine, which helped give him a toned base.

About a month ago, Zelehowsky began practicing with his team again. While he is feeling better, he said, he still must be wary not to overtrain and risk another episode.

“It’s still pretty easy to flip out of rhythm, but I know my triggers, and I know what I’m doing,” Zelehowsky said. “If I have a night where I can’t sleep and I’m staying up doing homework, I’m not going to practice the next day. I’m just going to take it easy.”

Lucas Zelehowsky, his brother and men’s swimming assistant coach, said it’s important to monitor how much Adam is doing to make sure he does not experience an atrial fibrillation episode again.

“The key factor that we’re trying to build on this year is getting his strength up rather than bombard him with a lot of yards and a lot of hard practices,” he said. “It’s more like good–quality swimming, getting a lot out of your practices in a little amount of time because the more time his body is under stress, the more likely it’s going to occur.”

After having to overcome his physical setback, Markwardt said, Zelehowsky has matured in the past year, which will make him a better competitor in the long run.

“There are people I worry about — and I tell them right out — if you take a year off, I never expect to see you again because it’s really hard to come back to a competitive sport that requires so much work and effort,” he said. “Adam was one of the few kids that I had confidence that he had really felt like he had things he wanted to do still and was ready to come back.”

For his last season, Zelehowsky said, one of his main goals is to make it back to Nationals, while having fun along the way. And after taking the year off, he said, not only does he feel physically ready to build on his success, but he also feels more mentally prepared than ever.

“I really found myself over the year I had off,” he said. “Since I was on my own, I really had to motivate myself. It made me really want to make it back with the team. And now that I’m back with the team, I realized how much I was missing it.”