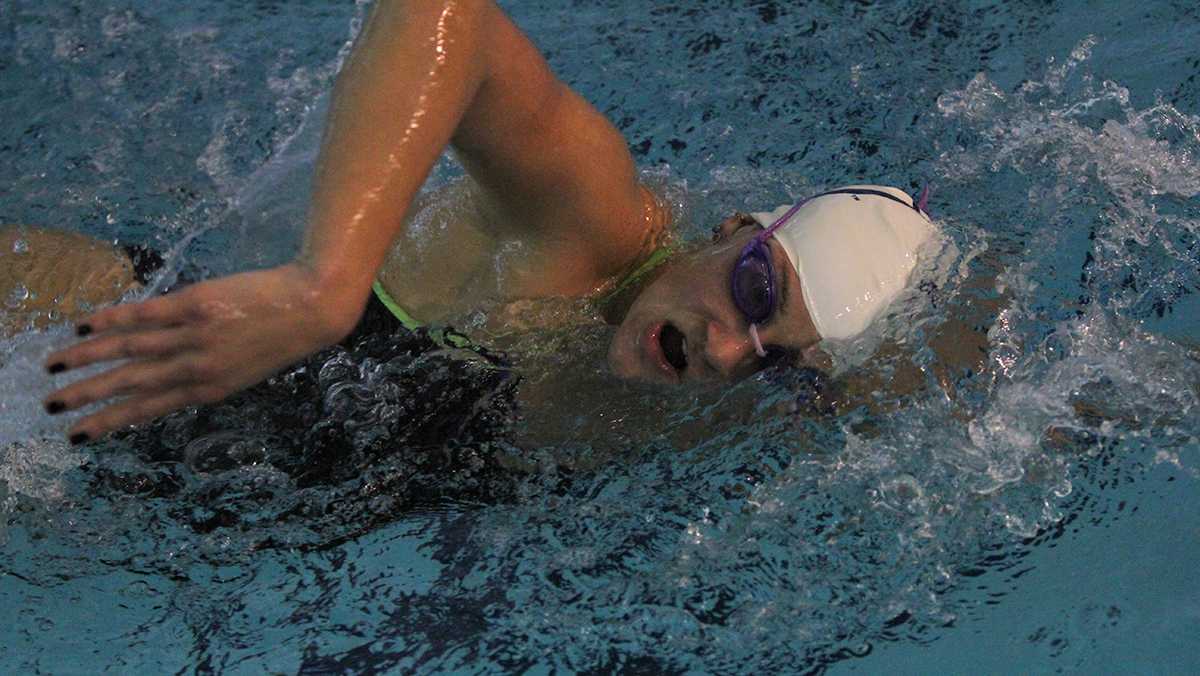 Avril crowe/THE ITHACAN
Senior Samantha Reilly practices Feb. 3 in the Athletics and Events Center. Reilly, who has been a consistent competitor for the women’s swimming and diving team since her freshman year, began CrossFit training during the off-season to stay in shape and get stronger.
By Samantha Cavalli — Staff Writer
Published: February 7, 2017

Since she was 4 years old, senior Samantha Reilly has been in love with the water. But as she prepared for her final season of competition, she took an alternative training route in an attempt to give herself an edge this year.

Reilly took on CrossFit training last February to stay in shape and increase her strength during the off-season, which she said has made a big difference in her training this year. CrossFit is a high-intensity training program that incorporates varied movements from different sports in rapid succession.

“When I came this season, I just felt so much stronger than I’ve ever been,” she said. “I’m able to get off the blocks quicker because my leg strength is there. Maintaining the strength over the summer was awesome because then I didn’t have to start over when I got here. A lot of times, it’s hard to get back into swimming if you lost your strength.”

Reilly came onto the team among a freshman class of more than 20 women and rose to the top. She has dropped 8 seconds in the 100-yard backstroke in the past three seasons and 17 seconds in the 200-yard breaststroke.

“It’s been very fun putting in the hard work with my teammates over the past four years,” Reilly said. “I set goals as a freshman, gave every practice 100 percent effort, pushed through the pain, and it’s awesome to get the results.”

She began her swimming career at the age of 4, after her neighbor, who was a swimmer, introduced her to the sport. By the time she was 7, Reilly said, she had begun swimming year–round at her local YMCA.

After competing in a swim meet at Ithaca College in high school, she said, she fell in love with the pool and the campus.

Reilly only began swimming on a serious club team in high school, compared to some members of the team who had been swimming on clubs since they were in elementary school, so she said she did not know what to expect when she arrived for her first practice at the college.

“It was extremely different from my club team,” Reilly said. “Here, everything was just so much more welcoming. The teammates would cheer you on at every practice, and everyone was motivating each other rather than competing with one another. There’s more of a friendly competition where you want to push each other. It made you feel like you were a part of something.”

Reilly began CrossFit training after her junior season to keep in shape for the next swimming season. She said she knew that by working with Jim Garofalo, her former strength and conditioning coach at the college and current coach at CrossFit Pallas, she would be able to stay in shape and build up strength.

“He was just the best coach I’ve ever had strength and conditioning–wise,” Reilly said. “I had never lifted before, and I fell in love with it. He was so patient and was willing to work with you. I saw myself gaining strength, and I thought that was really cool.”

Senior Lake Duffy, also a member of the women’s swimming and diving team, joined Reilly at CrossFit Pallas in Ithaca last year after Reilly introduced her to it.

“She started going to CrossFit Pallas and seemed to really love it and talked very highly of the workouts,” Duffy said. “After being abroad, I had to find something to get back into shape for swimming. There was a local CrossFit gym right by my house, and I decided to give it a try.”

Reilly said CrossFit and swimming are both good workouts, as they involve the whole body. She said the training has been beneficial for her because it includes high–intensity interval–training workouts, which are similar to workouts she would do in the pool, and she is able to tailor the weight training to her ability.

Paula Miller, head coach of the women’s swimming and diving team, said Reilly is stronger this year than she has been in the past and believes CrossFit may be the reason.

“It’s hard to say because of the training she does in the water … to figure out where the greatest difference is,” Miller said. “But I think it complements the swimming training in the water, and the strength that you gain with CrossFit has been a wonderful balance in helping her get stronger. She came back ready to go, and it was really exciting. She has had a phenomenal year.”

Duffy said she credits her CrossFit training for giving her an edge this season.

“CrossFit has been one of the core reasons this season has been successful,” Duffy said. “My strength and endurance have never been so good, which enables me to work incredibly hard in the pool and in the gym.”

Reilly said she was able to find a community to rely on during her CrossFit training, just like the community she has on the swim team.

“What’s cool about CrossFit is that it’s kind of a whole team once you’re there, and it’s a different community,” she said. “With CrossFit, it’s like having a community cheering you on like a swim team, and it helps you to stay in shape while you are with a group of people.”

Reilly said that even though her competitive swimming career is almost over, she hopes she can continue both swimming and CrossFit.

“I have only just started CrossFit, so I will absolutely continue with that,” she said. “Swimming will always be a part of my life, but CrossFit will be my new daily activity and form of exercise.”