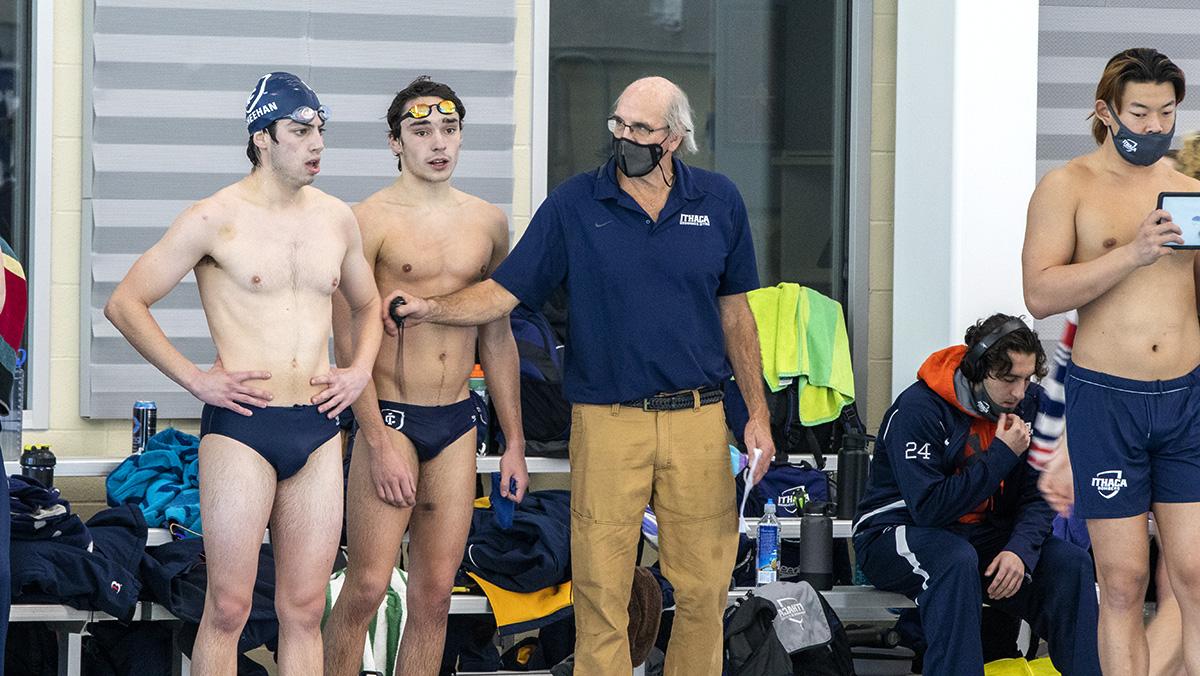 The Ithaca College swimming and diving program is currently in the midst of its first full season with Kevin Markwardt as the head coach for both the men’s and women’s teams. The change has been a major transition for the groups, navigating the challenges of developing a common program culture that is best for both squads.

For over three decades, the one constant in the program was Markwardt and Paula Miller as the head coaches for the men’s and women’s teams, respectively. In summer 2020, Markwardt took over as head coach of both programs when Miller decided to retire after an illustrious 36-year coaching career.

This year is Markwardt’s 35th season as head coach of the men’s team and his 41st year coaching in the program, in which he became the team’s winningest coach. He said that prior to serving at the helm for the men’s team, he spent time as an assistant coach for both squads.

“I coached men and women the first five years I was here,” Markwardt said. “So, it’s not such a great leap. And I always had a great relationship with the women’s coach here.”

Miller’s retirement came as a surprise to many, especially after the Bombers posted a dominant 12–0 record during the 2019–20 season. Since Miller announced her retirement, the roster of the women’s team has decreased from 39 to 31 athletes.

There are currently only three sophomore’s on this year’s squad. Markwart said he is unsure as to why there are few representatives from this class, noting that he was not involved in the class’s recruitment. Assistant coach Mike Blakely-Armitage ’00 said the announcement initially received a mixed reaction from athletes.

“I would say they were very hesitant,” Blakely-Armitage said. “They were sad that they were losing their longtime coach, in Coach Miller. I think some people were excited for the opportunity of having new coaches.”

Junior swimmer Jane Pfeufer spent her freshman season at the college with Miller as head coach, and is now becoming acquainted with Markwardt and the staff. She said that while she was disappointed to learn she would no longer be working with Miller, she said she was looking forward to the change.

“The entire team loved Paula,” Pfeufer said. “So it was really sad to see that she was going to change over. But initially, I was actually a little excited to finally be training with the men’s team because in all high school swimming athletics, for the most part, men’s and women’s swim and train together and compete together. So, I thought it was going to be a positive change.”

With this coaching decision, now all swimming and diving programs in the Liberty League have one head coach for both their men’s and women’s squads. Susan Bassett, associate vice president and director of Intercollegiate Athletics and Recreational Sports, said the college does not plan to hire a new head coach for the women’s team.

“When Paula Miller retired, we restructured the coaching staffing position,” Bassett said. “Actually the current model is very common in men’s and women’s swimming and diving.”

Markwardt expressed that when competing in meets, he and the staff are often very busy making sure that they are providing attention to each of the 64 athletes. He said this has been an adjustment because he had become accustomed to a meet schedule in which his team competed in every other event.

“If something happened and the score was close, I had an entire three, four minutes to sit down and think about okay, ‘Are we going to change our lineup?’” Markwardt said. “Now it’s like every 30 seconds there’s a new event up, and I don’t want to miss anybody swim. So, that’s different.”

Pfeufer said the change has created a positive environment within the program. But she also said as a swimmer, it can sometimes be difficult to receive the same level of instruction as when there were separate coaching staff dedicated to each team.

“Our meet environment has started to get better because we just are closer with the other team,” Pfeufer said. “Other aspects haven’t been so great, just with the fact that we really have two coaches for [64] swimmers. So it’s hard to get the individual attention you might need from a coach depending on the day.”

Senior Tim Hector, a captain on the men’s team, said that while the program is becoming acclimated with this new system, he believes that the coaching staff is doing its best to help each athlete reach their potential.

“It’s definitely a lot because it’s the first year,” Hector said. “Obviously there’s an entire team that’s never worked with [the coaches] before. The coaches have been handling it pretty well, they’re giving feedback to everybody.”

Blakely-Armitage said the coaching staff will continue to learn about each of its teams and work with them to develop strategies for success.

Bassett said the college does not currently have any plans to hire additional assistant coaches because of the college’s “hiring freeze,” but will consider its options if they have the opportunity to hire new coaches in the future.

Markwardt emphasized that he wants to ensure each team maintains its own traditions, despite sharing a coaching staff. He said he expressed this to Bassett when the college was considering this change.

“The teams do have their own identities,” Markwardt said. “When this first came to light that I would be taking over both teams, I had a discussion with the athletic director and with the teams themselves and talked about the importance of that.”

Both teams have competed in four meets thus far, delivering dominant efforts that have led to the men’s team starting the year with a 4-0 record, while the women’s team is 3-1 early in the campaign. Hector said he believes that as the season progresses, both the men’s and women’s teams will become more unified and build a positive program culture.