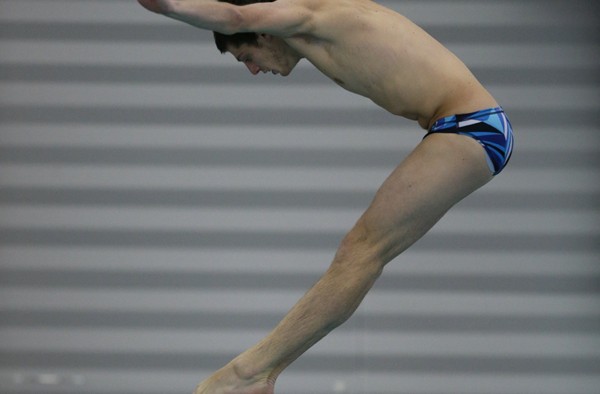 Durst Breneiser/The Ithacan
Senior diver Martin Brown takes a dive during a practice in the Athletics and Events Center on Feb. 12. He qualified for nationals on March 2.
By Doug Geller — Staff Writer
Published: March 7, 2013

Not all great seasons end with a championship. This is the message the Blue and Gold took away this season, as they were unable to defend their state title. The season may have ended on a low note, but the Bombers had plenty of highlights throughout the year.

The men’s and women’s teams both came in 2nd place in the New York State Championships, unable to defeat Stevens Institute of Technology. The men fell 1,356.5 to 1,586 and the women fell 1,333.5 to 1,447. The team swam better than they have all year and broke several school records in the process.

Junior diver Korie Fackler set the Upper New York State Collegiate Swimming Association, the Empire 8 and the A&E Center Aquatics Pavillion record in the 3-meter dive with a dive of 494.50 and the UNYSCSA and school record on the 1-meter dive with 475.35. Sophomore Peter Knight, senior Jake Robbins, freshman Adam Zelehowsky and junior John Carr set the school record in the 400-meter free relay at the state championships. This was one of 11 school records set during the meet.

Breakout stars emerged from both teams this year. Sophomore Megan Busiman put up a team record in the 200-yard backstroke, and junior Emily Hoskinson pushed through breathing problems during the state meet to swim in every event in which she was entered. Head Coach Paula Miller said she was pleased with all of her swimmers and how coachable they were.

“There were a lot of people who stepped up,” Miller said. “It was a fun year to coach. They would do anything we asked and didn’t complain.”

On the men’s team, Zelehowsky and freshman Addison Hebert stepped up for the Bombers. Zelohowsky helped out the team early in the season by winning the 500-yard freestyle and the 200-yard freestyle at the Henry Kumpf Invitational at Rensselaer Polytechnic Institute. Hebert fought through a shoulder injury all season but was still able to win events such as the 200-yard individual medley at the Kumpf Invitational.

Men’s team Head Coach Kevin Markwardt said he was happy with the season as a whole, looking at the potential of the team and the results on paper.

“We were really happy,” Markwardt said. “You’re always disappointed when you’ve won the [state title] and feel like you have a chance to win it again, but I don’t feel too bad about it. You look back over that and realize that was for us to perform up to our potential.”

Team competition has come to an end, but several individuals will be continuing on to the national competition. Three divers, sophomore Matt Morrison, senior Martin Brown and senior Kloe Boeckel, and five swimmers advanced on to nationals.

Boeckel said that the team had a successful year and that it can’t be measured directly with individual victories.

“I was really excited just to be here, even if I didn’t make it,” Boeckel said. “It was a great season.”

Though the team did not win the state title, Robbins said the season was still successful.

“We set our goals and we exceeded them,” Robbins said. “Our record board was taken over. As far as the season goes, I couldn’t be more proud or happier with the result.”