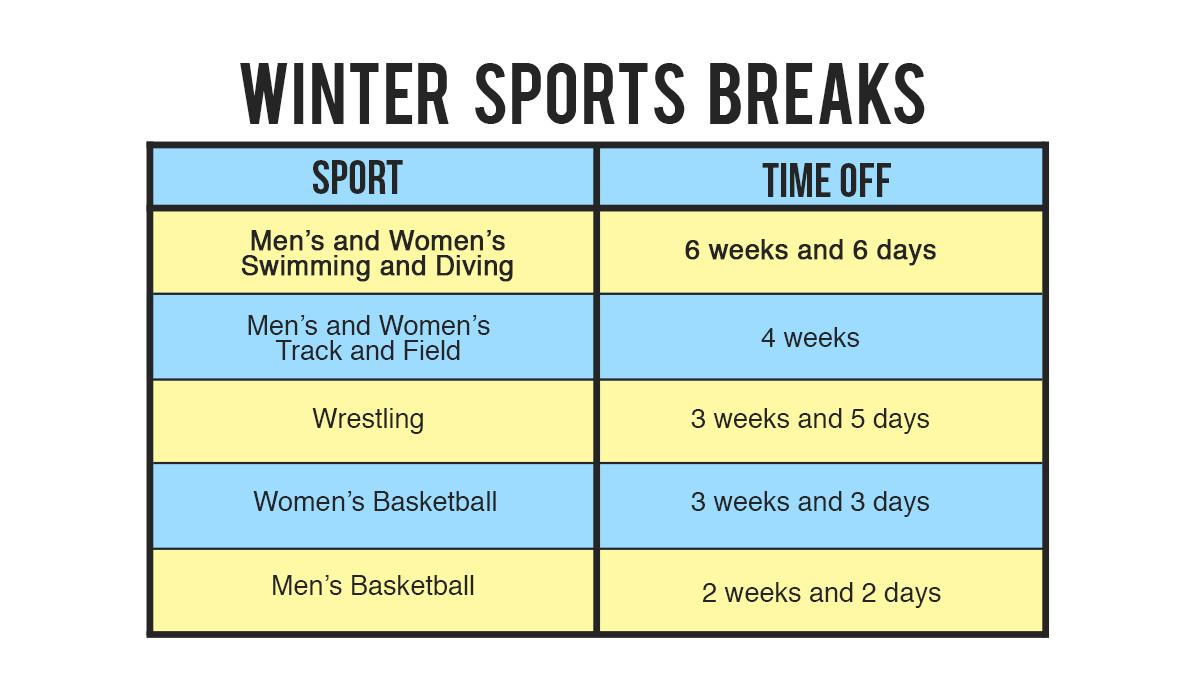 Design by Nicole Peter
While most winter teams play a large portion of their season over winter break, the Swimming and Diving teams take a long break training in Florida.
By Dani Pluchinsky — Staff Writer
Published: December 13, 2017

While most winter sports at the college start their regular season in November and end in February, the Ithaca College swimming and diving teams began their seasons Oct. 14 and do not conclude until the beginning of March. This extended schedule allows the teams to have an abnormally long break in the middle of their season.

The swimming and diving team has a seven-week break from competition, which is unlike any other sport at the college. The next longest break in competition is track and field, with a four-week break.

The team uses this break to have an intense training period. When the athletes return to Ithaca on Jan. 1, the divers stay on campus while the swimmers go to Florida for 10 days. During this time, athletes compete in two-a-day practices, and also have lifting once a day to help them prepare for the second half of their season.

Kevin Markwardt, the head coach of the men’s swimming and diving team, said the trip is a great way for the team to bond.

“It’s exciting to go to Florida and to bond with the team,” Markwardt said. “We live together and have all of our meals together, and for those 10 days, it is completely all about the team.”

In Florida, the swimmers train at Nova Southeastern University to use its heated outdoor pool. The divers stay in Ithaca because the Athletics and Events Center has an indoor facility and if  divers are exposed to cold weather, they are unable to train.

Markwardt said the trip to Florida is not school-funded and that according to the school, the team does not have to travel anywhere because it has the Athletics and Events Center. Instead, the team raises money to travel. The women hold swimming lessons throughout the year, while the men hold a swimming clinic that runs year-round.

Senior swimmer Nilza Costa said that the trip to Florida is great but that it can also be extremely demanding.

“For our first meet back, we have the RPI meet which is really frustrating,” Costa said. “We are all so sore and tired from the training. It is really painful too, but then after that, once we stop doubles, then our bodies can recover and our times start to get better.”

Markwardt said swimming is typically a sport that is practiced year-round.

“The nature of swimming tends to be something that you really need to train a lengthy amount of time to have success even though high school seasons are very short,” Markwardt said.

Freshman diver Justin Moczynski said he has never experienced a season this long, as his high school season was only three months.

“My high school season would not start until after Thanksgiving, and it usually ended by mid-February,” Moczynski said. “The transition going to a long season was interesting because by the first meet, it felt like the end of the season, even though it was only the beginning.”

Mike Ariel, facilities coordinator of the Athletics and Events Center and the aquatics pavilion manager, said that the NCAA has allotted 19 weeks for varsity sports to compete at the collegiate level. However, the weeks do not have to be consecutive.

“The NCAA lets the teams split up the 19 weeks however they want to,” Ariel said. “In general, the college takes off three weeks automatically because of finals and Christmas in December, and then two weeks for Thanksgiving, which pushes the start of the season back to October.”

The team’s last meet in 2017 ended on Dec. 3. Markwardt said that normally, the season would not end that early, but that the meet has conflicted with finals in previous seasons. The team used to have a meet the weekend right before finals week, Markwardt said, but it was hard to get the athletes to focus.

The coaches tried rescheduling the meet to one week earlier, but that meet conflicted with other colleges’ finals schedule. A compromise was met by agreeing to hold the meet in the first weekend of December.

Sophomore diver Benjamin Pesco said the break is unlike anything he has experienced. As a member of the men’s track and field team last season, he never had a break like this before, but sees it as an advantage.

“It lets me know that I have so much time to really pinpoint and focus on things that I know I need to get done,” Pesco said. “I don’t have the pressure of ‘Man, I really should be focusing on this better to get more nitpicky results,’ so I have a lot of time to flesh out things in a more thorough way.”

Men’s and women’s swimming and diving loses to RPI