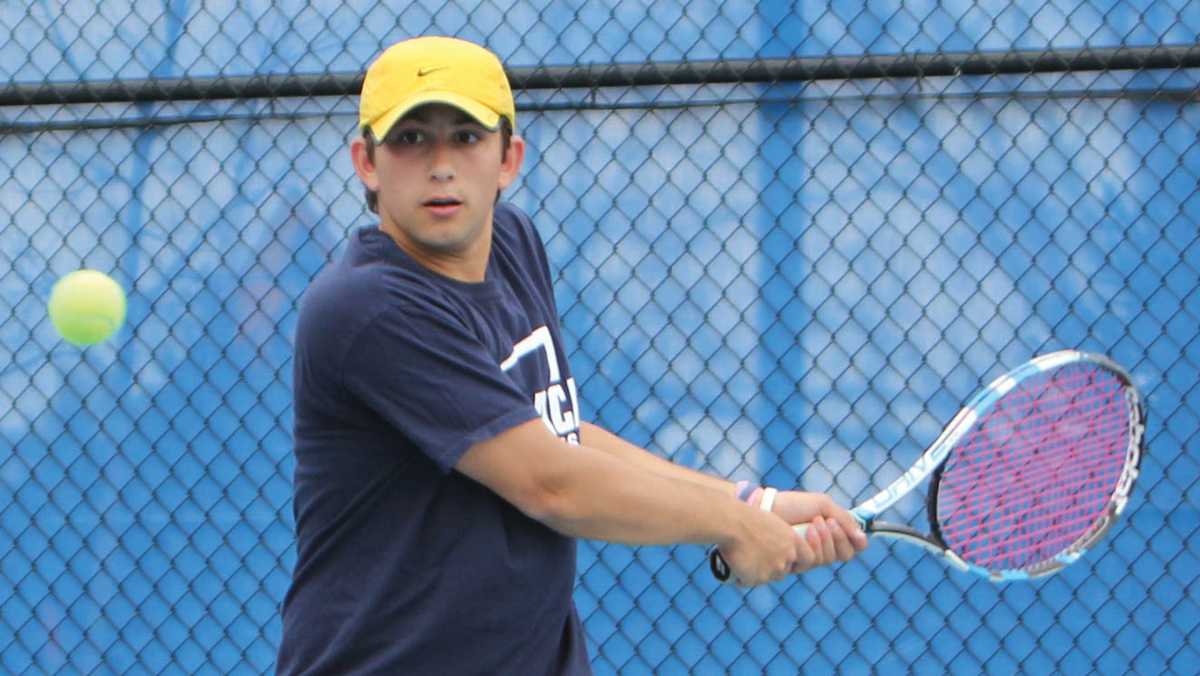 CAITIE IHRIG/THE ITHACAN
Chris Hayes ’16 was announced as the new assistant coach of the Ithaca College tennis teams Jan 16. Hayes suited up for the Bombers from 2012–2016 and is third best in program history, with 61 singles wins.
By Caitie Ihrig — Photo Editor
Published: January 24, 2018

After playing for the men’s tennis team from 2012–16, Chris Hayes ’16 is returning to Ithaca College as the assistant tennis coach. During his time on the South Hill squad, Hayes finished with 108 career wins, making him the 10th person in program history to reach 100 wins. He has the third-highest win total at the college for singles, with 61.

After graduation, he was a graduate assistant at Mercer University, under his uncle Eric Hayes, for a year and a half. He spent this past summer as a tennis professional at the Nassau Country Club in Glen Cove, New York.

Photo editor Caitie Ihrig spoke with Hayes to discuss being back at his alma mater, coaching his former teammates and what he is looking forward to this season.

Caitie Ihrig: How did you find out about the assistant coach position?

Two days later I found out that Jordon Smith, the college’s old assistant coach, had gotten the job. I was happy for him, but I was a little disappointed, but all things happen for a reason. He’s a good coach and he is going to do good things there, but naturally, the Ithaca position opened up.

CI: What is it like to be back at the college?

CH: It’s great. It’s nice to be back here. It felt like an eternity since I graduated. A lot of it is the same – the buildings and everything. It feels like I’m back home. Ithaca gave so much to me in my four years, in terms of the tennis program and my academics, that this is my chance to give back and help build this program.

CI: How is it different being back as a coach instead of a player?

There are players on the team whom I played with, which is very interesting. I’m excited to start a new kind of relationship with these men and women.

CI: What is it like coaching the players you were on a team with?

CH: Practice starts next week and it’s going to be a process. It’s something we have to ease into and it has to come organically — getting used to the fact that I’m not on the team anymore and I’m a coach. It’s a different situation, but I think it will work out well because I’m familiar with a lot of the players and I understand personalities, so I think we can have a very professional relationship.

CI: What have you learned from being a coach?

With Eric, I learned how to motivate players and to bring a team together for a common goal, and that is something I am passionate about doing here because, with this team, we can have a special season. The Liberty League is much tougher than the Empire 8, especially for tennis, but our goal is to win a championship, and one of our main goals, as coaches, is to get our players to buy into
that belief.

CI: What are you looking forward to most about being back at the college?

CH: The people. The reason I’m in college coaching is because I love being around people this age and level of player. I’m really looking forward to the season and being able to work with the team — it’s why I’m here. I’m happy to be back, and I’m ready to get to work with the team.

CI: What are you hoping to gain from this opportunity?

CH: Experience. I want to learn a lot from Coach Austin. He has been in this business for a long time and with this program. I know I will learn a lot about coaching from him. I have only been coaching college tennis for a year and a half, and I still have a lot to learn. The more experience I get coaching players and being in pressure situations here will only help my career going forward.