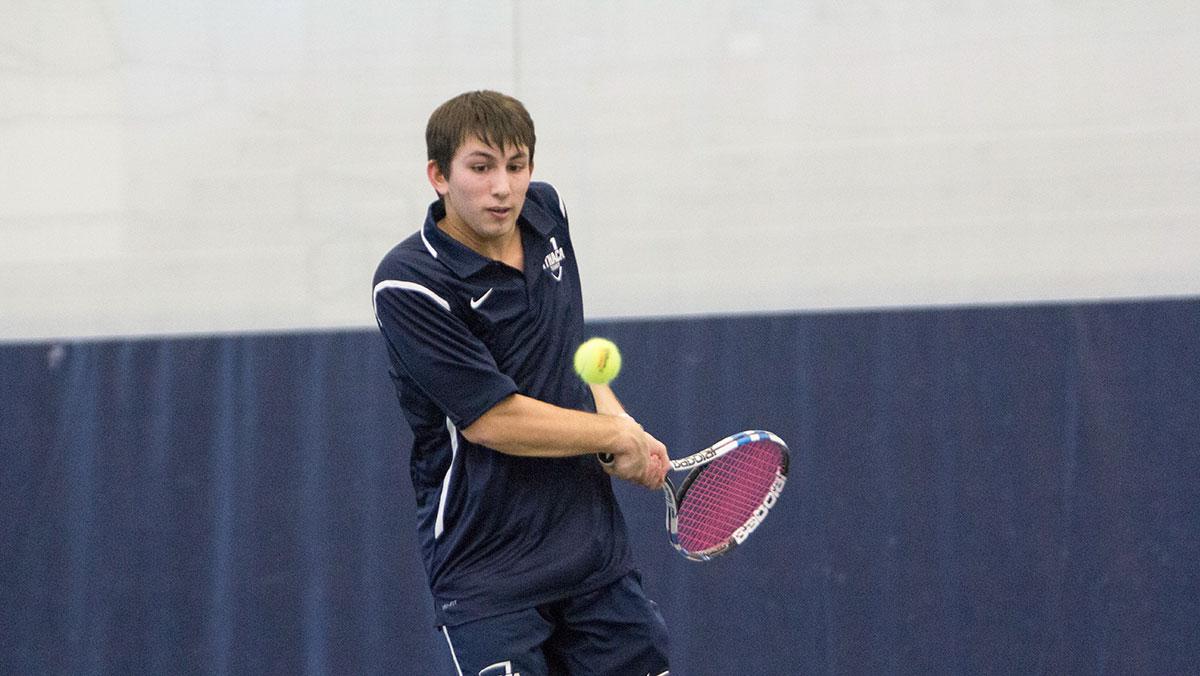 When the match is about to start, senior Chris Hayes brings the men’s tennis team into a huddle and yells “Whose house?” to get them fired up. “Our house!” the team yells back.

Three doubles always take the court first, followed by six singles matchups. Most play both in a day, but the two events are different sports to them.

To secure a win in doubles, a stronger player who can score the point on the return will play at the net. This strategy is known as first-strike tennis, being very aggressive as soon as the ball is served so when it comes their way, they can be explosive and hit the ball in a way that their opponent cannot hit it back.

Even though the players have to be very aggressive, doubles is more mentally exhausting. It is a team effort, and partners have to focus on each other and determine their next move.

Senior Marni Blumenthal said she does not know how her partner will react to the ball, causing her to have to watch her partner each time the ball comes her way.

“You have to be aware for the next ball,” Blumenthal said. “You don’t know if your partner is going to take it or if it’s going to go over their head.”

Sophomore Lorenzo Viguie-Ramos said he and his partner, junior Wes Davis, pinpoint all the things they can do to help them be successful.

“Wes and I map out a plan of what we are going to do. Strategically–wise we have signs that we use,” Viguie-Ramos said. “We talk after every point about what their weaknesses are that we noticed and what their strengths are.”

Freshman Michael Gardiner, who is partnered with Hayes, knows that if he doesn’t want to let his partner down, he must play to Hayes’ game for a successful doubles match.

Unlike the men’s team, which has set partners, the women do not know their partners until the day of a match.

Assistant coach Jordon Smith said the correct chemistry between the women has not been found yet.

“Between all three teams, we are looking for that right combination between all the players, and we hope we are going to find it soon,” Smith said. “We think we are on to it, but it does take time because sometimes, you think that something is going to click between two players, and it doesn’t.”

Once doubles has finished, the team transitions to a more physical challenge: singles.

Head coach Bill Austin said being able to play your own game is what makes singles compelling.

“There are all sorts of different styles that are great and very effective. That’s the nice thing about tennis: There’s not just one style of play that, categorically, you can say, ‘Well, that’s the style of play everyone should play,’” Austin said. “You play the style that suits you both physically and mentally.”

For Hayes, this means being prepared and bringing his A–game.

“I have to be ready for war almost every single match because if I let off the gas pedal a little, then my level dips, and anyone can beat me on any given day if they are playing well,” Hayes said.

However, as physical as singles is, tennis is predominantly a mental game.

Freshman Shayna Ginster said the mental part comes down to tennis’s being an individual and immediate sport.

“Tennis is such a mental game because your opponent can really get in your head, and there’s a whole bunch of different tactics to try to slow the game down — tying your shoe to try to mess with your opponent and stuff like that,” Ginster said.

No matter what happens on the court, Viguie-Ramos said, the players will always be there for one another because that is the key to their success.

“At the end of the day, yeah, we’ll hit rough patches here and there, and there will be things that cause a teammate to lash out, but at the end of the day, we are a family, and we all just work together on the court because that is what carries us through the match, and that’s what helps us win and be successful,” Viguie-Ramos said.