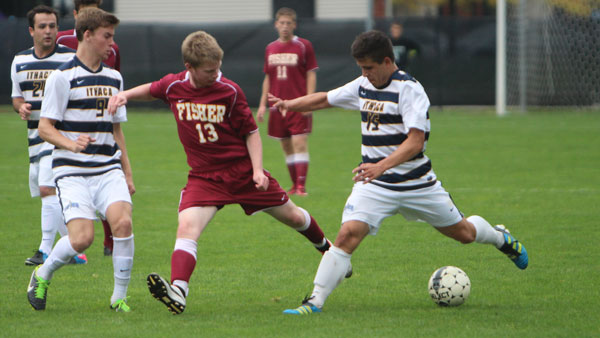 Corey Hess/The Ithacan
Junior forward Casey Williamson tries to keep the ball away from a St. John Fisher defender in a 4–0 win on Saturday on Carp Wood Field
By Matt Constas
Published: October 2, 2013

Losing the first four games wasn’t the start the men’s soccer team was looking for. Despite a tough start, the players have gained experience and learned about themselves.

This year, the Bombers’ first four opponents all have better records this season, and each has provided some tough competition. Junior midfielder A.J. Wolfanger said the Bombers’ schedule matches them against tough teams early in the season to prepare themselves for the long haul.

“We’ve learned a lot about our team from these early games, and we know what we have to work on to be well-prepared for conference play,” he said. “You really don’t find out much about your team when you play a cupcake non-conference–schedule.”

In their first game of the season, the Bombers played SUNY-Oneonta, which was ranked 24th in the preseason coaches poll, and forced the Red Dragons into overtime, eventually losing 1–0. Even without the desired outcome, sophomore goalie Kenny Chapman thinks they can learn a great deal from an overtime game against a tough team.

“Mentally and physically, this game prepared us for the grueling energy college soccer takes out of you,” he said. “It showed us that we will be able to compete with some of the best teams.”

In the four losses, the team is more confident in its offensive ability than it was heading into the season. The scoring opportunities have been there, but sophomore back Joey Dobbins said the Bombers need to find the back of the net more often.

“We are much stronger offensively as far as creating opportunities,” he said. “We just need to be better at finishing our chances.”

The offense picked up in last Saturday’s 4–0 win against St. John Fisher College. The Bombers scored four goals, more than the total they had in their previous three games combined. This, Chapman said, has come from playing sharper soccer and moving without the ball.

With only one win this season, the Bombers are looking to improve on defense. This year, the Bombers have allowed eight goals, almost half of the 17 they allowed all last season. Wolfanger has noticed the defensive struggle, especially when the ball is crossed into the box. If the Blue and Gold wants to improve their defense, they will have to start by defending the box.

“The last seven goals we’ve conceded have come from crosses into the box,” he said. “We need to get better at clearing these crosses, seeing the ball and man when the ball comes into the box. We have many big defenders who are good in the air, so I don’t expect this problem to persist.”

Chapman said he is impartial about having a tough schedule early, but he notices how the Bombers have grown from their play early in the season.

“I see benefits from both ways,” he said. “It’s nice to get confidence up with wins, but I think it is also very important to play teams that show you what you need to work on to make us a better team.”