Track and field athlete transitions from dunking to jumping 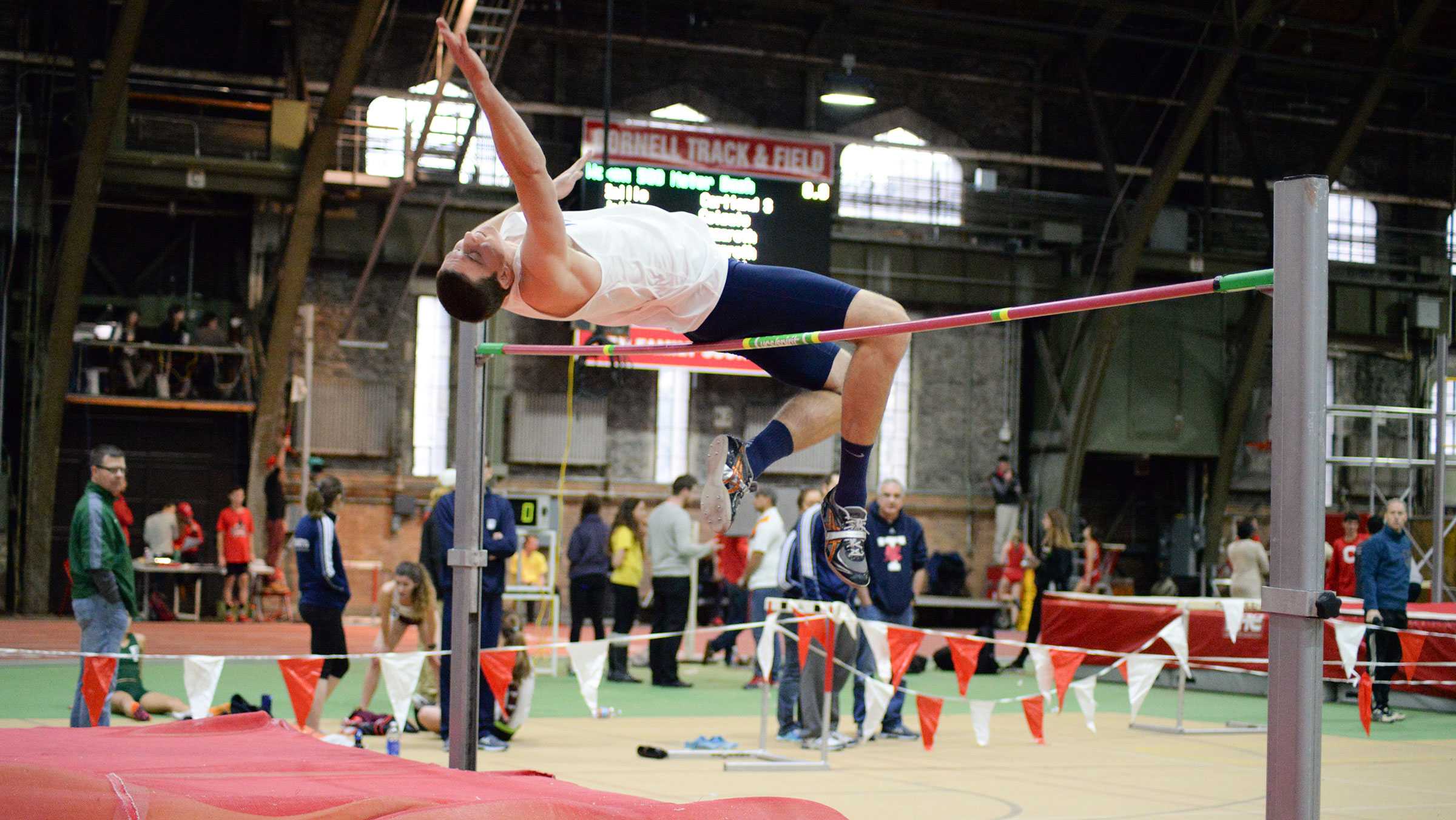 Tommy Battistelli/The Ithacan
Junior Andrew Brandt leaps over the high jump bar in the Cornell Relays on Dec. 6 at Barton Hall. Brandt quit the men’s basketball team after his sophomore year to join the men’s track and field team. He has jumped a career-best 2.03 meters.
By Matt Hornick — Contributing Writer
Published: March 24, 2015

When junior Andrew Brandt began his collegiate athletic career as a freshman in 2012, he was a member of the men’s basketball team that upset first-seeded Stevens Institute of Technology to win the Empire 8 Championship. However, now, after a journey of self-discovery and hard work, he is a leader on the men’s track and field team.

This was not the path the 6-foot-9-inch Brandt envisioned for his athletic career when he began high jumping in high school. Brandt said he began participating in the track and field event in high school to improve his basketball performance.

“I started high jumping in high school as a way to work on jumping higher for basketball, I had never thought about continuing with it in college,” Brandt said.

After playing limited minutes in his first two years on the college’s basketball team, Brandt informed head men’s basketball coach Jim Mullins of his decision to leave the basketball team in order to pursue track and field. Brandt said collegiate basketball was not what he expected and he was not enjoying it as much as he thought he would.

“Basketball became more of a job for me than a sport I wanted to play, and that’s not why I came to Ithaca to play basketball,” Brandt said. “I’m not going to the NBA, and I wanted a sport that I would enjoy doing every day, and basketball wasn’t that.”

Brandt also said his lack of enjoyment led to him not working as hard as he should have, and that was not fair to the rest of the team. He said he thought the team’s best chance to succeed would be without him, and while the team was disappointed, the coaches were supportive of his decision.

“They understood that it was a tough decision for me to make, and they wanted me to stay around because they recruited me, but in the end they were supportive of my choice,” Brandt said.

Mullins said Brandt’s decision was not a shock to him based on his performance and limited playing time.

“I wasn’t surprised he came to me about leaving, it didn’t seem like his heart was into it,” Mullins said.

Junior Sam Bevan, a member of the basketball team and former teammate of Brandt’s, said he was uncomfortable continuing to play basketball without Brandt.

“We were roommates last year so we talked about it a lot as he was going through the process of deciding,” Bevan said. “It felt weird continuing on with my career without him being there because we came in together as freshmen and we were very close.”

Brandt kicked off his collegiate track and field career as a sophomore in the spring of 2014 after finishing out the 2013–14 basketball season. He had initially contacted head men’s track and field coach Jim Nichols about high jumping during his freshman year, but was not able to make the commitment of being a two-sport athlete. Once he chose to stop playing basketball, he reached out to Nichols again about joining the team and Nichols said he was happy to have him. However, Nichols said Brandt had a rough start when he first re-entered the high jump pit.

“He hadn’t high jumped in two years, so he was rusty, as I expected he would be, but he worked hard to improve, and now he’s excelling,” Nichols said.

Once Brandt got his bearings as a high jumper again, he had a good enough 2014 outdoor track and field season to earn both New York State Collegiate Track Conference and Eastern College Athletic Conference honors. He ended the season with a fourth-place finish in the ECAC championships by jumping a season-best 2.01 meters.

Now a junior, Brandt started the 2014–15 indoor track and field season slowly, jumping 1.94 meters in the team’s first two meets. After that, however, Brandt improved at every meet and had his best performance at the NYSCTC Championship meet Feb. 27–28, where he jumped a career-best 2.03 meters to take a first-place finish in the event and help the Bombers to a second-place finish at the event.

Beyond his impact as one of the top performers on the men’s track and field team, Brandt’s biggest impact has been the effect he has had on his teammates. Nichols said Brandt’s experience has helped him to become a leader this year.

“He’s a sheer competitor, and he clearly wants to win and he works hard not only to improve his own performance and provide guidance to his teammates to make them better,” he said. “Now that he’s an upperclassman, more of his teammates look to him.”

Freshman high jumper Kevin Pomer said Brandt has helped him greatly as both an athlete and a teammate.

“I talk to Andrew after all of my jumps at our meets and he gives me advice of ways to improve,” Pomer said. “When Andrew is not jumping he is never sitting in the bleachers he is always cheering on another teammate.”

Reflecting on the year since he joined the track and field team, Brandt said he is pleased about where he is, and that having to make the decision made him grow as a person.

“I’m happy with my decision, and I’m happy that I had to go through the thought process,” Brandt said. “I learned a lot about myself from it.”