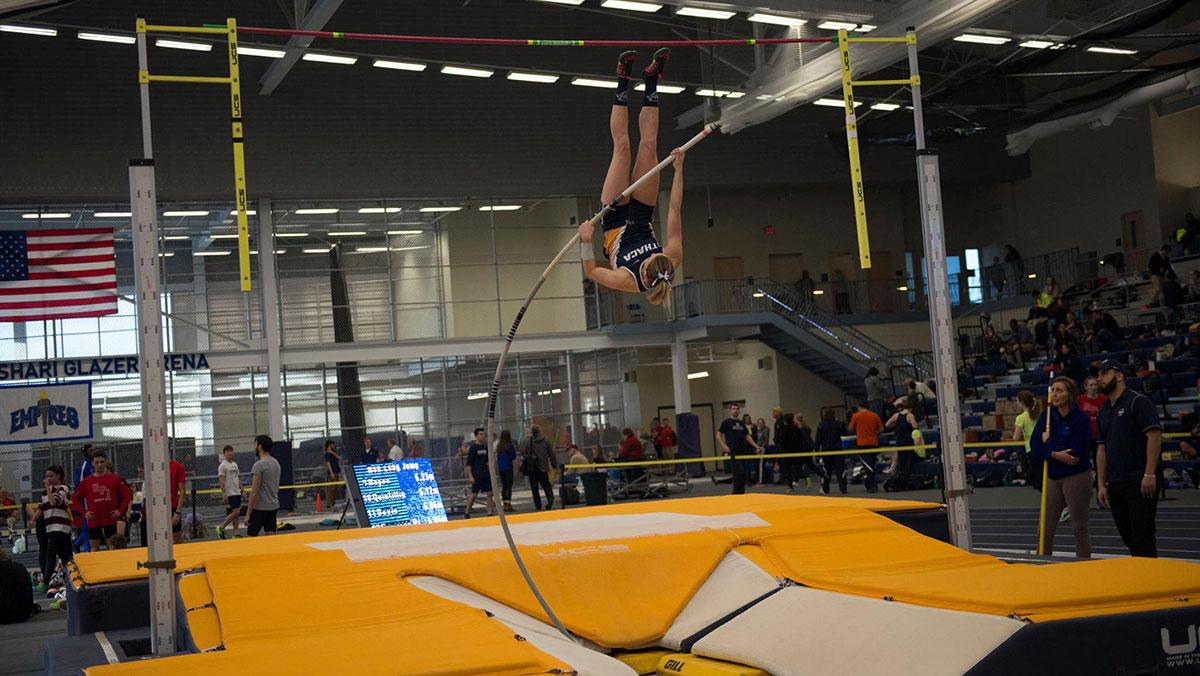 After an exciting and successful first day of the New York State Collegiate Track Conference Championships for the Bombers, the tournament closed out Feb. 27. Both the Ithaca College men’s and women’s teams performed exceptionally well, finishing second and first, respectively.

Women’s track and field head coach Jennifer Potter, said the burning desire and the need to win are what drove her team to its 15th state title in the program’s history.

“Our girls are competitive. They don’t like to lose,” Potter said. “They will put everything out there to make it happen and compete. Today they got after it and fought for every point, which is what we’ve talked about doing all year.”

Junior Katherine Pitman was able to finish the tournament as the women’s Field Athlete of the Meet, and the women’s coaching staff took away the Coaches of the Meet award.

Pitman blew away the competition in the women’s pole vault after topping her school record once again with a height of 4.07 meters. Her first-place finish also set the Glazer Arena record and the nation’s top mark in the event.

Pitman was not the only record-breaker at the meet for the Bombers. Junior Brandy Smith broke the school record in weight throw with her first-place distance of 18.32 meters.

Sophomore sprinter Sophia Feuer won the 500-meter dash when she crossed the finish line with an Eastern College Athletic Conference-qualifying time of 1:17.96.

Potter said Feuer gave her one clear message prior to the race.

“She actually came up to me before the race and said, ‘I’m gonna win this race,’ and the she ran a heck of a race and set a huge personal record,” Potter said.

Senior captain Rachelle Sartori was especially proud of this weekends performance of the team. She said she got emotional as the events began to finish and the weekend closed up.

“I’m really proud of the team. After my races I had a moment where I began to choke up since I’m a senior and it’s crazy thinking the indoor season is almost over,” Sartori said. “It was definitely an incredible meet and we had some amazing performances. I’m very excited to see the girls who go to ECACs next weekend and any girls we have that might go to nationals.”

The men’s team also had many positives come out of this meet, as it finished a mere nine points behind University of Rochester for the title.

Senior Andrew Brandt set a facility record in the high jump after leaping over the bar 2.10 meters.

Junior Larry Cass qualified for ECACs in the shot put with a fifth-place toss of 14.42 meters.

Men’s head coach James Nichols was very pleased with the team’s performance on the day knowing that every one of his athletes gave it their all.

“I think the team did outstanding competing yesterday and today,” Nichols said. “Overall, they did a really good job. Everyone that competed, competed with heart and did an awesome job as far as trying to do their best. We just came up nine points short. It’s frustrating but it’s rewarding to see the effort that they gave. I wish they could go home champions, but it’s something we have to look forward to for the outdoor season.”

Nichols also praised his team for the chemistry that was displayed throughout the match. He said the team chemistry was the most pleasing thing he saw from his team on the day.

“The team has what’s called a ‘Bomber Curve’ on the track when they go nuts and cheer on the relays,” Nichols said. “That’s something the entire team has been working on for years: to support everybody on the team and get everybody in the same frame of mind that this is a team and the relationships they make are going to last a lifetime.”

Both squads will look to carry the moment into the the ECAC Championships at 1 p.m. March 4 and 10 a.m. March 5 in Staten Island, New York.

While it may seem like a huge task to go straight into another championship, Sartori believes the women’s team will use the challenge as a positive.

“I think the ECAC is going to be a very big motivator,” Sartori said. “I think it’s going to be an extra push for everybody to keep going because I know we’re hungry for more. It’s going to help us bring it for next week.”