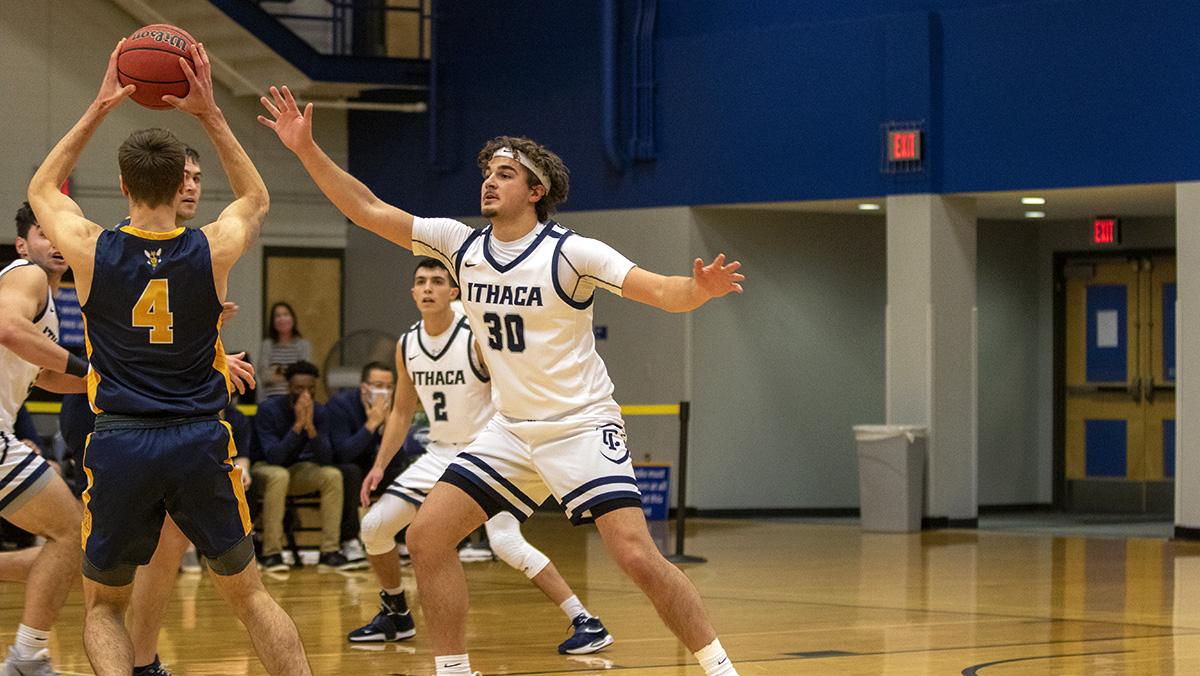 Malik Clement/The Ithacan
Luka Radovich, senior forward on the men's basketball team, spent two years at the Division I level with Fordham University before transferring to Ithaca College. He is currently averaging 16.3 points per game and 49.5% from the field.
By Connor Glunt — Senior Writer
Published: February 10, 2022

It is not common for a Division III program to secure an athlete with Division I talent, but when the Ithaca College men’s basketball team landed senior forward Luka Radovich, the Bombers added a star for their starting lineup.

After spending two seasons playing college basketball at the Division I level, Radovich transferred from Fordham University to Ithaca College and has transitioned smoothly into a prominent role on South Hill. Radovich, who spent his first two years of eligibility in New York City with the Rams, has played in 15 games and started 14, shooting 49.5% from the field and leading the team with 16.3 points per game. The six-foot-six-inch forward only saw playing time in three games, which was a prominent factor in his decision to choose the college, before transferring to the college and has logged at least 20 minutes of playing time in all but two games he has appeared in.

When he was in high school, Radovich said he was weighing options between offers from Division III schools or walking on to a Division I program. Radovich’s Amateur Athletic Union basketball coach played at Fordham University, and he said he helped him during his decision.

“I remember my coach told me, ‘You can always go from Division I back to Division III, but you’re never going to have this opportunity again,’” Radovich said. “So I took it and ran with it. I don’t regret going or anything, and the experiences were unmatched. I just wanted to get back on the court and play.”

On May 15, 2020, Radovich officially decided to transfer from Fordham University to Ithaca College. However, he had to wait until Nov. 12, 2021, to make his debut for the Bombers because the 2020–21 season was canceled as a result of the COVID-19 pandemic. Radovich said he was not nervous to perform well in his first game with his new teammates, but there were some nerves since it had been a while since he started a game.

“It was my first full game starting, with [referees] and a crowd and everything, in four years since my senior year of high school,” Radovich said. “Hearing my name called in the starting lineup before the game gave me the chills.”

Those chills quickly wore off as Radovich dropped a season-best 36 points in the Bombers’ 75–72 season–opening loss to Alfred University.

Radovich typically plays in the paint for the Bombers on both ends of the court, using his quickness to maneuver around slower, bigger opponents to get to the hoop, but still possesses the skill and finesse to shoot from range and create plays. On the defensive side of the game, he uses his physicality to hold his ground against the other team’s biggest player on the court. Although he transferred into the program before current head coach Waleed Farid was hired, he knew the team was a perfect fit in regards to playing style for him.

Radovich quickly settled into his role on the court and into life on South Hill. One of the factors that persuaded him to come to the college was the Roy H. Park School of Communications. Radovich, a sports media major, said the college had the perfect balance between basketball and academics, especially compared with the workload at his former university. Instead of long weekdays starting with team lifts at 7 a.m. and ending with a night class at Fordham, Radovich has a typical course schedule and a team lift before each practice. Radovich said it has been a nice change for him in terms of academics, social life and basketball.

Another reason Radovich decided to join the South Hill squad was his childhood friend and current teammate, senior guard George Sikoryak III. When Radovich began to look into transfer opportunities, he talked to Sikoryak and realized he had a chance to play with his longtime friend.

The pair is from Cresskill, New Jersey, and have known each other since their preschool days. Sikoryak said it has been fun going from hopping fences to get to each other’s childhood homes, playing together in high school, and now being reunited as teammates once more.

“It’s been an awesome feeling reliving old memories. It’s awesome to play with him. He’s a great player, and he’s a fun guy to play with, so I was stoked to have him back,” Sikoryak said.

Radovich transferred to the college before Farid was hired as the head coach for the team, so Farid did not know much about the senior. Since Radovich had some time to get to know his teammates prior to Farid’s arrival, Farid said leaders on the team like Sikoryak and senior guard Skylar Sinon said they thought highly of Radovich, and Farid was impressed once he saw Radovich take the court.

“To be honest, I didn’t know much about him,” Farid said. “There were some guys on the team that were high on the new transfer, but once I got here and got access to some of the practice footage from last year … It wasn’t until those first couple weeks of practices where I realized what a special talent he actually is when you see [him] face to face, in person on a daily basis.”

Over his years of coaching, Farid said he has had mixed experiences with transfers. He has had some work out, and others not, and added that it is difficult to get a grasp on transfers until they actually get playing time. For Radovich, however, Farid said there have been no bumps in the road.

“I would probably say this has been a seamless transfer,” Farid said. “I think the good thing also for Luka is that he was here last year, so this wasn’t his first year experiencing everything with Ithaca … To be able to be on campus, take classes, get to be around the guys, it was really just getting used to how we were going to do things that was really good for him.”

During the first half of the season, Farid said he has observed Radovich as more of a quiet leader. Though he is not afraid to be vocal to his teammates, he prefers to let his play do the talking and lead by example.

“He’s got a very high confidence level, and I think that rubs off on the guys,” Farid said. “When he’s playing really well, that inspires and motivates [the team] to get the other guys fired up.”

Radovich is often tasked with sizing up against the opposing team’s bigger players but still has the skill set of a guard. Whether it is securing rebounds down low or creating scoring chances from the perimeter, Sikoryak said Radovich has developed into a reliable option in any situation for the team.

“He’s someone that you know if you need a big shot, he could hit it,” Sikoryak said. “It’s nice to see that you know he’ll do whatever we need to do to win … He may not be the biggest down low if he’s going against someone that is six-foot-eight-inches or six-foot-nine-inches, but he plays like it.”

With only a handful of games left in the regular season before the Liberty League tournament, Radovich said he feels comfortable and confident with his new team. He has been able to showcase all areas of his game throughout the season and is ready to make an impact for the Bombers down the stretch.

“I think we really got the ball rolling,” Radovich said. “Guys are stepping up big time, they’re finding their roles and they’re doing what they’re capable of doing. So I think everyone’s locked in and committed, and this team can really achieve something special.”