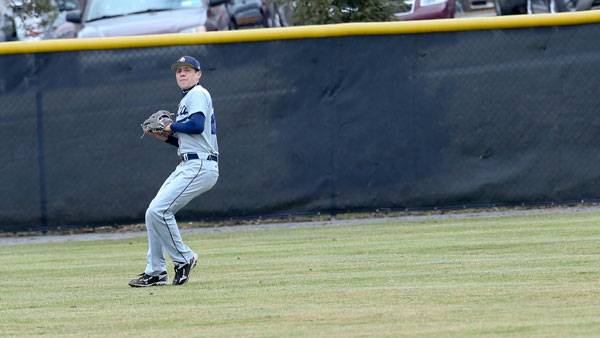 Freshman catcher Ryan Henchey stepped into the batter’s box for his first collegiate at-bat March 9 in the baseball team’s third game of the season. Pinch-hitting for junior catcher Cooper Belyea, Henchey drew a walk to load the bases.

Next to the plate, junior right fielder Christian Brown crushed a bases-clearing double, scoring Henchey, as well as senior Luke Stark and sophomore Cameron Oathout. Brown’s double allowed Henchey to cross the plate for the first time in a Bomber uniform. However, it was not the first time Brown had knocked in Henchey: The duo played many games together before coming to South Hill.

Brown and Henchey were teammates at Columbia High School in East Greenbush, N.Y., and played there with another Bomber, sophomore left fielder John Stanley. The trio played together at Columbia under head coach and former Bomber pitcher Christopher Dedrick ’95 when Henchey was a sophomore in high school.

Dedrick, who has been a part of the baseball program at Columbia for 10 years, has since helped eight of his former players attend Ithaca College. The three Columbia players on the 2014 baseball roster are the most of any high school, and Columbia has been the best represented high school on the Blue and Gold’s baseball rosters for the last decade. Since 2004, the squad players from Columbia have outnumbered the players from nearby Lansing High School and Ithaca High School combined.

Dedrick, who helped the Bombers to three NCAA Division III College World Series appearances, said he encourages his players to attend the college if he feels it’s the right fit.

“If the kids have the grades, I really point them towards [the college], especially if they’re serious about baseball,” he said. “For me, [college] was more than just a baseball experience, it was a life experience.”

Dedrick said he uses many of the same drills that Bomber head coach George Valesente uses, though he has modified and changed them over time. He said many of his team’s defensive drills, pitching routines and preseason lifting workouts mirror those of Valesente’s.

“I owe everything I have to Coach Val,” he said. “I really learned the game [from him].”

For Valesente, the connection with Dedrick has helped benefit his program in the form of new players. Valesente said Dedrick helps him to recruit potential players not only from Columbia but also from the rest of the Albany, N.Y., area.

“Chris has been very positive,” Valesente said. “He’s able to get the information to each of the youngsters about the style of our program and how it would be beneficial for them in more ways than one.”

When Brown tried out for the team as a freshman, he said his high school experience gave him a leg up because he knew what to expect from Valesente and the program.

“All of our practices in high school were run the same way [as Valesente’s],” he said. “I definitely had an advantage over some of the other players coming in because I already knew what was going on.”

Brown has been starting in right field for the Bombers since last year, and Stanley replaced Andrew Turner ’13 in left field this year after playing just eight games as a freshman. When Henchey is catching, one-third of the Bomber lineup is made up of Columbia players.

Stanley said having Brown in the outfield helps him play better because they know each other’s strengths and weaknesses.

When Stanley was looking at colleges, he said, he used Brown as a resource. He stayed with Brown on his recruiting visit and said Brown helped him make his decision to attend the college.

According to Dedrick, his former players who now play for the Bombers have formed a family. He said he stays in contact with many them, even playing a round of golf with them when possible, and they all help recruits from Columbia make their decisions.

“It’s not just myself; it’s all of the former players and all of the current players that are there that are really sharing their experiences with recruits,” he said. “I try to keep in touch with all of them.”

Both Brown and Stanley said Dedrick convinced them to continue the Columbia High School tradition of playing for the Blue and Gold.

“To a point, I felt like he pushed it so much that it kind of veered me away from looking at other places,” Brown said. “Now that I look back on it though, it’s not a bad thing because I love it here.”