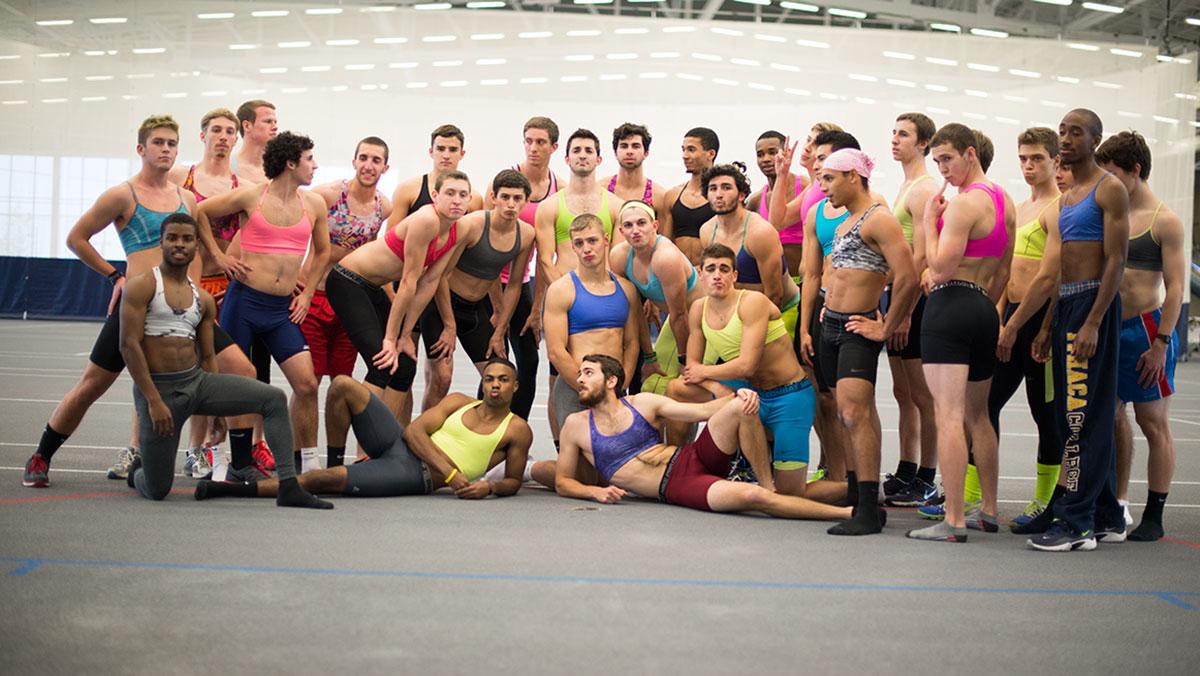 Tommy Battistelli/The Ithacan
The men's track and field team dressed up as the women's team for their Halloween workout at the Athletics and Events Center.
By Kristen Gowdy — Assistant Sports Editor
Published: December 3, 2014

On Oct. 31, 30 athletes emerged from the Athletics and Events Center locker room donning sports bras and spandex. While some wore hair ties to push the hair out of their eyes and others sported bandanas to absorb sweat, all appeared ready to work out on the indoor track.

However, they all had already completed their workout for the afternoon on the familiar gray rubber that serves as their platform for running, jumping and throwing every day. For many of these athletes, it was their first time wearing their hair up and certainly their first time in a sports bra.

But on this particular day, the men’s track and field team did something that none of its predecessors had ever attempted. And as the men stepped out of the locker room dressed as their female counterparts, the women’s team, which had stuck around after its workout, burst into peals of laughter.

“It was definitely the most commitment I’ve seen to a group Halloween costume,” junior distance runner Anna Fay said. “I think it showed that we are comfortable enough to make fun of each other.”

It was the first time the men’s team had ever coordinated a group costume for its Halloween lift, junior middle distance runner Jordan Smith said. But the neon yellow sports bras and the tight-fitting compression shorts represented more than just a fashion statement. They were indicative of the newfound bond between the men’s and women’s track and field teams, which has also been echoed in other individual sports on South Hill, such as the swimming and diving squad.

Smith attributed the track and field teams’ improved relationship to increased collaboration between the programs.

“This year we have a much stronger bond than we have had in the past, and I think that has to do with the fact that we introduced the idea of sharing coaches between the teams,” he said. “In the past, we had our coaches and they had theirs, so now it’s more of a team effort between the girls’ and the guys’ teams.”

Unlike years past, the track and field teams work together during practice to improve as an entire program rather than separate entities. The teams also lift together, and Smith said the increased collaboration has led to greater rapport among the athletes, which differs from previous seasons because it has created more personal relationships.

Though the teams have not had a meet yet — they will first compete on Dec. 6 — Smith said he hopes the increased interaction between the squads will lead to more support during competition.

“I think that we still were pretty good support for each other in the past years. I think it will just be even better now,” he said. “Really, we were always on the same team, but it wasn’t as personal as it probably will be this year. In the past you would see someone wearing an Ithaca shirt and you would be like, ‘Oh, I should be rooting for them because they are on my team.’”

On the other side of the A&E Center in the Aquatics Pavilion, the men’s and women’s swimming and diving teams have adopted a similar affinity. This season is the first that the two squads have come together for both their lifts and dry-land workouts.

Like the track and field teams, the swimming and diving teams are now closer due to increased collaboration, but senior Logan Metzger said it can also be traced to the reduced size of the men’s roster. Last year, there were 32 male swimmers compared with 22 this season.

The 7–0 men’s team is off to its best start in over a decade, which Metzger said could be partially attributed to this newfound kinship. The women are also off to a fast start, standing at 7–1 to begin the year.

The success that the teams have experienced could be partially due to the revamped conditioning workouts as well as the chemistry and support between the two squads, Metzger said.

“I think there’s a bit of a trade-off because the girls give the guys technique pointers and the guys can push the girls to work more,” he said. “I think there is an exchange, it works both ways … [and] it helps a lot.”

The constructive criticism in the weight room translates to the pool. Senior Katie Huber said the teams gather at the end of each lane in which a Bomber is swimming and cheer for their competing teammate, regardless of gender.

“We do push each other,” she said. “When the men’s team is swimming well at meet, it inspires the women to do the same and vice versa.”

Outside of the pool and off of the track, the athletes agree they are friendly with one another, but do not often organize bonding activities, though Huber said the swimming and diving teams participate in team barbecues and a winter formal.

Fay said rather than developing chemistry through outside activities, the track and field squads do so during workouts and by travelling together.

“We are supportive of one another and want each other to do well,” she said. “We don’t really have any organized bonding activities between the two teams just because there are so many of us, but I think we still bond over our mutual love for the sport.”

Even though the swimming and diving teams coordinate several team bonding activities, senior Clement Towner said most of the strengthened relationship between the two comes from the time spent in the pool and travelling to meets.

Metzger agreed with Towner. He said though the two teams are just that — two teams — during practices, they experience success partially because their relationship is so strong and they unify as one program during meets.

“It’s better going to a meet knowing the people on your team, knowing they support you,” he said. “You want them to win, they want you to win. It’s just better knowing you have that type of support that we have.”