Two current coaches honored by the place they call home 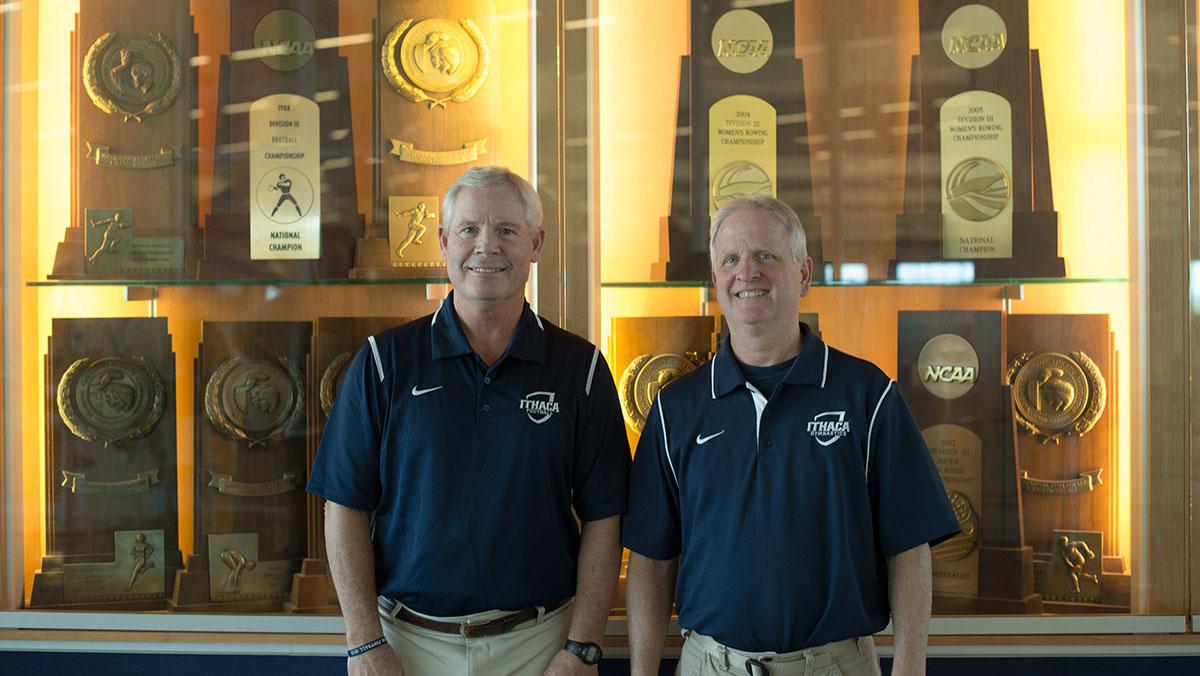 Tommy Battistelli/The Ithacan
Head coaches Mike Welch, football, and Rick Suddaby, gymnastics, stand side-by-side in front of the trophy case inside the Athletics and Events Center. They are both going to be inducted into the Athletic Hall of Fame during the 2015 ceremony on Sept. 25 along with six other alumni and two teams.
By Kristen Gowdy — Senior Writer
Published: September 23, 2015

“It is not common at all,” Bassett said. “It says something special about Coach Welch and Coach Suddaby.”

Welch still remembers the first time he called the college his home.

He remembers his parents dropping him off, their car pulling away from his residence hall. The 18-year-old Welch was alone and away from home for the first time in his life.

“It was pretty emotional,” he said. “I come from a family of seven, and we’re a pretty close family. At that point, you really don’t know what to expect, then you realize you’re going to be in a different place for a long time.”

But he wasn’t alone long, as he quickly found a second family in the Bomber football program. By the time he was a senior, Welch had been named team captain.

“It was a school I fell in love with,” he said. “It turned out to be one of the best decisions I ever made.”

Welch and Suddaby will be enshrined into the Hall of Fame along with five former athletes, two teams and one former athletic administrator. They join six other current head coaches in the select group.

Suddaby’s 30-year path to the college’s Hall of Fame began a bit differently than Welch’s. A four-year standout at SUNY Cortland and a 1979 national champion in gymnastics, Suddaby spent a year coaching the Red Dragons before resigning to pursue his master’s degree.

When the head coaching position at Ithaca College opened up in 1985, Suddaby said, he didn’t think twice about coaching at his alma mater’s rival.

“I just grabbed it,” he said. “Ithaca College has been my existence for the past 30 years.”

Suddaby was also inducted to Cortland’s Athletics Hall of Fame in 2009, but he said where the Cortland enshrinement was mostly because of his success as an athlete, the Ithaca College induction solely represents his coaching career.

“It’s nice to be recognized for that,” he said. “That’s what I’ve been doing — I obviously don’t train anymore, I don’t fly through the air anymore. I coach, I teach kids.”

Between them, Welch and Suddaby have been involved in three national championships at the college: Welch was an assistant coach during the football team’s 1988 and 1991 titles, and Suddaby led gymnastics to a team championship in 1998. Both have been recognized by national organizations as the Division III coach of the year in their respective sports — Welch by the College Sports Magazine and Suddaby by the National Collegiate Gymnastics Association.

On Sept. 25, they will join Kerri Brown ’03 and Stephanie Cleary ’05 for women’s basketball, Megan Hughes ’04 for women’s swimming and diving, Dave Pitzer ’77 for men’s basketball and football, Michelle Schlegel ’04 for women’s lacrosse, Andrea Golden, a women’s lacrosse coach, the 1965 football team and the 1982 field hockey team in a new induction format, which will take place in Glazer Arena in the Athletics and Events Center.

The new format includes a formal cocktail reception and dinner that is followed by the induction ceremony and a dessert reception. It will be emceed by Kevin Connors ’97.

Welch and Suddaby are excited about the change in layout. His induction, Suddaby said, is a reminder of his longevity at the school and of the way he was able to shape his coaching dreams around the college.

“When I first started as a young coach, I thought, ‘Well, I’ll do [Division III] and win that a bunch of times then move up to the big time,’” he said. “Then I found out, first of all, that it’s not that easy, and second, that this is where my heart is. We’re training kids here that love it. And because they love it, I love it. It keeps me young.”

For Welch, it’s a bit different. As he is inducted Sept. 25, he will be thinking of moments, rather than years. The moment his parents dropped him off, the moment he was named team captain, the moment he won the national championships, the moment being named head coach and all of the moments since.

But most of all, he said, he will be thinking of the school that became his home.