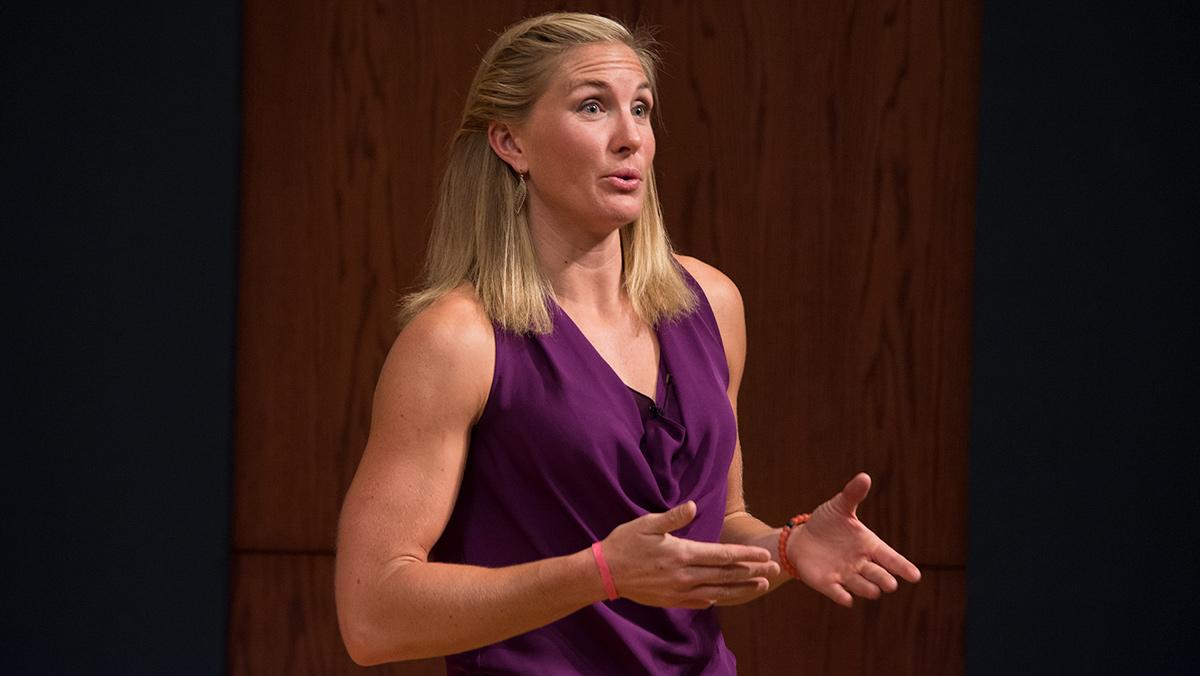 By the time Meghan Musnicki ’05 arrived at the Ithaca College Athletics and Events Center to lead a training session for student-athletes and coaches at noon Sept. 27 in Glazer Arena, she had not even checked into her hotel yet. Musnicki, at 5 feet 11 inches and wearing her red–and–blue USA jacket, was ready to go.

A two-time Olympic gold medalist, Musnicki has returned to the college from Sept. 27 to Oct. 1 as “IC’s Olympic Champion in Residence.” Musnicki said she is excited to be on campus for the next few days.

“Just being able to interact with the students is what I’m looking forward to the most, and seeing the day-to-day activities, going to different classes and just seeing the student body,” Musnicki said.

At the training session, senior Tara Malone, a member of women’s crew team, said it was a great experience to interact with Musnicki.

“It was tiring, a lot of effort and really hard, but really fun,” Malone said. “It was really fun to get to work out with an Olympian, or have her yell at us when we were working out.”

The hourlong training session was one of the many events Musnicki will be part of this week. During her time on campus, Musnicki has also held another training session at the Ward Romer Boathouse, as well as a weight–training session with Vic Brown, strength and conditioning head coach for the crew team. Captains from each of the sports teams also had the opportunity to speak with Musnicki. She also gave a keynote speech, “The Sky is the Limit; an IC Alumna’s journey to Olympic Gold,” which took place in the Hockett Family Recital Hall on Sept. 27.

Musnicki said one of the main ideas she wants students to take away from her visit is the value of perseverance. In her speech, she spoke about the amount of training and dedication it took to make the U.S. Rowing national team, which she made after three failed attempts.

As part of the women’s eight, Musnicki won gold at the 2012 London Games and most recently at the 2016 Rio de Janeiro Olympics, along with first–place finishes at the 2013, 2014 and 2015 World Championships.

“Everyone only knows that I have won so many times, but there’s so much more to the story than that,” she said. “You don’t only win. I don’t only win. I’ve fallen down, and I’ve failed a lot. If you really want something, then it’s probably going to be difficult to achieve it, and you’re going to hit stumbling blocks, but if you can just keep pushing towards the goal and keep that in mind, it will pay off in the long run.”

Musnicki began her speech by discussing how she struggled socially in high school and transferred schools her junior year. When the time came to choose a college, she committed to St. Lawrence University to play basketball but then switched to crew, a sport she had never previously done, at the beginning of her freshman year after the rowing coach noticed her and told Musnicki to consider it.

The Naples, New York, native also spoke about the impact of the death of her father, who suffered a heart attack when she was 19. She transferred to Ithaca College during the second semester of her sophomore year to be closer to home.

At the college, Musnicki went on to win two NCAA national championships. Her senior year, she was a first-team Division III All-American.

Musnicki said she initially planned to go to nursing school in Boston upon graduating from the college. However, her plans changed when she was invited to a sculling camp in Virginia, where she was introduced to post-collegiate rowing, something she had never previously considered. Afterward, she moved to Boston and in 2006 was invited to a U.S. Rowing training camp in Princeton, New Jersey, where she was quickly cut from the camp.

“I needed to get cut from the camp because if I had not even gone and attempted to do it, I wouldn’t have known that I would develop a passion for it, that I could even think of doing it beyond just in college,” Musnicki said.

After being cut three times, the coach gave her one more shot to prove she could train with the squad, and that is exactly what she did.

Freshman gymnast Emily Szembrot said she enjoyed the part in which Musnicki spoke about the time she puts into her training.

“It was interesting hearing from an Olympian,” Szembrot said. “You see them in interviews on TV, but seeing them in front of you — getting a firsthand experience — was really cool.”

Musnicki said being an Olympic athlete is a difficult commitment but could not imagine not pursuing that goal.

“I loved what I did,” Musnicki said. “I wanted to do whatever it took to be the best, and that’s what it took for me. It’s definitely worth it. And I completely understand if it’s not worth it for some people. You can’t judge someone else’s journey or someone else’s goals.”