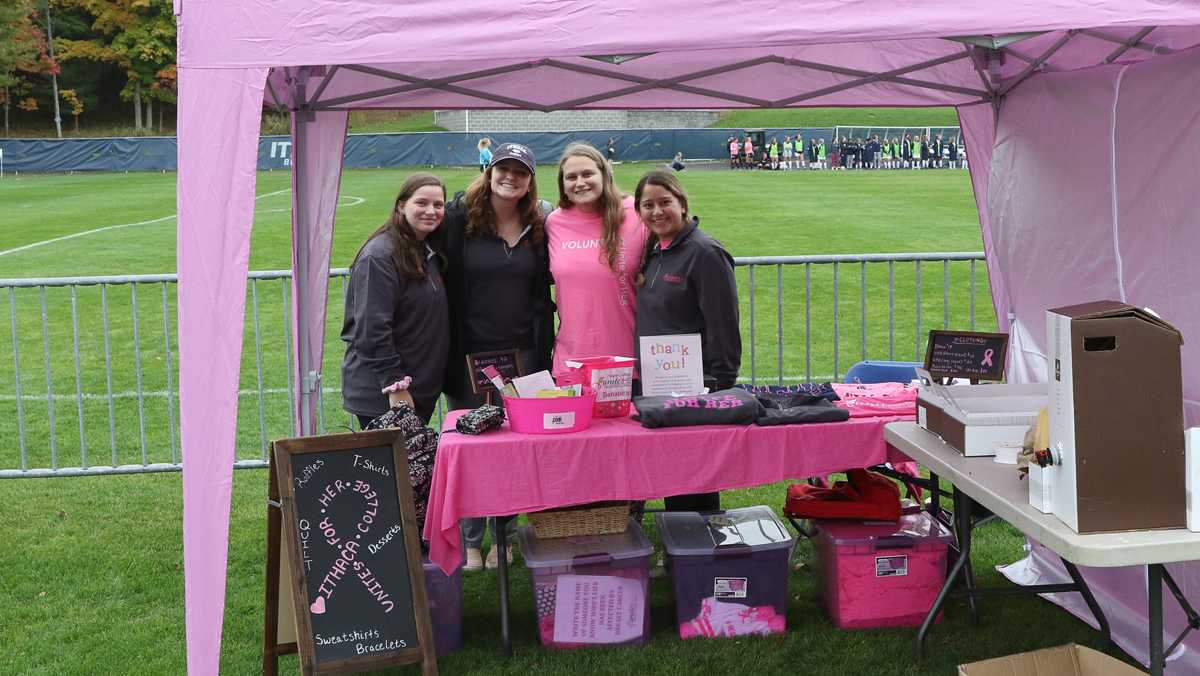 Before every game and practice, all of the players on the Ithaca College women’s field hockey team say their motivations for being out on the field. For the team’s Unite for HER Pink game, senior captain Kendall Keil said the reason was shared among the girls — play for those affected by breast cancer.

Unite for HER is a national organization that fundraises to support those affected by breast cancer. The foundation branches out to smaller communities to offer a more personal and effective support system to women in specific areas. The college’s chapter, which was founded in 2016, partners with other programs on campus, including the varsity sports teams, to set up a table at events to fundraise and raise awareness.

For the 2019–20 academic year, there are currently nine scheduled games. The volleyball, football and women’s and men’s soccer teams have already competed in their Unite for HER games, and several winter and spring sports will play for the organization in their coming seasons. The next ICUFH varsity event will be at 1 p.m. Nov. 2 when the swimming and diving teams kick off the first Pink game of the winter playing season.

On Oct. 20, the field hockey team participated in its Pink game, and Keil said that the Bombers were excited for the game for weeks prior. Similar to other varsity teams, the players wore pink T-shirts for warm-ups and tried to sport as many pink accessories in their game uniforms as they could, including headbands and shoelaces.

“It’s a friendly reminder that at the end of the day, it doesn’t matter who wins or loses,” Keil said. “It’s about coming together as a family and being there for one another. Being able to help and support those in need is such an amazing feeling.”

Sophomore Hannah Roa is the current communications chairperson for ICUFH. Roa said the organization tries to be as active as it can on campus by frequently posting on the club’s Instagram, Facebook page and bulletin boards. ICUFH partners with the varsity sports teams for Pink games to fundraise money and raise awareness. Roa said that in May, after raising money at all of the games, the organization gives a grant to someone in need.

Roa said that after the fundraising during the 2018–19 academic year, ICUFH was able to give its grant recipient a check of $5,000.

“The money we raise throughout the year at the sports games goes to an individual in the Ithaca community that suffers from breast cancer or is surviving from it,” Roa said. “I think it’s so important to be aware that this exists no matter where you are or where you’re from.”

Roa is a physical therapy major, and she said many of the other current and past board members have been PT majors as well. Roa said that being a part of the club is not only enjoyable and rewarding but also ties into her education.

“Being able to work hands-on with Unites for HER really teaches you a lot about how wellness therapies like nutrition and staying healthy can improve your health as well,” Roa said

Women’s soccer coach Mindy Quigg said the team has been collaborating with ICUFH since it began partnering with the varsity programs in 2016. Quigg said the women running the club have always been very professional and well-versed while running a class-act and showing that they’re happy to be there.

“We try to pride ourselves in being good community people,” Quigg said. “I always think that when you can join in with other members and peers on campus and help support them, I always think it makes Ithaca so much stronger.”

Quigg said the strong relationship between the organization and the varsity programs highlights the culture of the athletics office. She said the partnership brings out the leadership of students and proves unity among Bombers and Ithaca community members.

“I always think it helps give you a perspective on things, like how fortunate we are to be able to go out and compete on a daily basis doing something we love,” Quigg said. “We’re physically able to do it, and some people can’t do that. It’s always good to have reminders of how fortunate you are.”