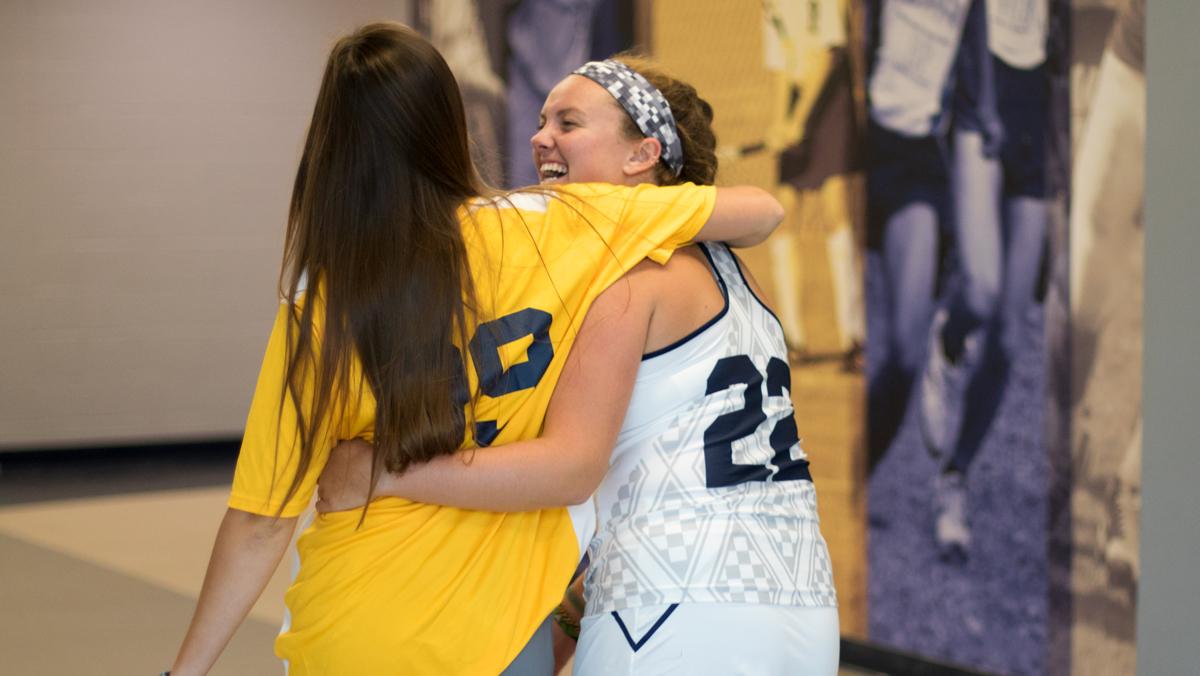 PHOTO ILLUSTRATION BY CONNOR LANGE
From left, field hockey sophomore goalie Savanna Lenker and freshman back Katie Dick have formed a bond as sophomores have planned events for the freshmen to engage with them and help them find their place on the team.
By Becky Mehorter — Chief Copy Editor
Published: September 13, 2017

After the seniors graduate in May, the rising senior class on each athletic team groups together to figure out new ways to lead the team. The rising freshmen and sophomores also use the summer to prepare for their new roles, which change with every team.

Fall sports teams rely on the leadership of the upperclassmen to rally the team members effectively, as the team’s season starts only weeks after school begins. The loss of graduated players means seniors, juniors and sophomores must quickly step up to their new roles on the team. And with a number of new Ithaca College coaches this fall season, returning players stepping into leadership roles continues the tradition under new leadership.

For the field hockey team, sophomore goalkeeper Savanna Lenker said the team designated a specific role to each class to organize and prepare for the coming preseason. Freshmen learn the game, sophomores mentor the freshmen, juniors keep the team’s spirits up, and seniors lead the team’s culture.

This season, the field hockey team only has two seniors — midfielder Amanda Schell and striker Michaela Donohue — who will also be the team captains. They will be leading the team into a season of firsts, with a new coach and a new league.

Freshman back Katie Dick said she was originally intimidated by the upperclassmen but that after two weeks of playing with the team, she feels supported and appreciated.

“Although I don’t as play much in games, they’re like, ‘Everyone has a role on this team,’” Dick said. “I still feel like a part of it all.”

After a year on the team, Lenker said she and the other sophomores are expected to find their leadership styles. They are also supposed to engage with the freshmen, as the sophomores made the same transition to collegiate athletics only a year ago.

“We try to plan different events,” she said. “For one of the girls’ birthdays, the sophomores and freshmen all went to dinner. We drove them down to Wegmans because we have cars and none of them do. Stuff like that, stuff they wouldn’t be able to figure out, we enable them to do that.”

Junior back Kaylou Stoddard said her role on the team is to help the two seniors lead the Bombers in drills and in attitude.

She said that when she was a freshman, there was a senior who pushed her to be better. Now, she said, she is one of the players the underclassmen look up to.

“You got to show them some love because they need to know that if they’re going to play with you some day, that they feel included,” Stoddard said. “When they are upperclassmen, or when they are on the field, you are all the same.”

The football team also has experienced a lot of changes since Fall 2016. The team has had to adjust to an entirely new coaching staff, a new field and a new quarterback. Sophomore running back Kendall Anderson said the changes also include a new culture on the team.

“The leadership has become more balanced,” Anderson said. “Everyone takes ownership and wants to work together. … You’ve got vocal guys. They get you ramped up and are in charge of the sideline. They keep the tone of the game.”

Transitioning from a freshman to a sophomore means the expectations for players are higher, he said. Anderson said his role is making sure the freshmen running backs understand the plays.

After losing 10 seniors, the upperclassmen on the women’s soccer team stepped up to improve the team dynamic and spread out the leadership, sophomore back Emma Landskroner said.

“This year, the leadership is kind of spread out,” she said. “We have our seniors who are like, awesome this year … and we all look up to them, but then also, I feel like we all have a leadership role rather than just them.”

Women’s soccer sophomore forward Jordyn Haynes said there were three returning starters and 10 new freshmen. She said the team pushes the freshmen to be faster and more aggressive.

“We push them to try harder in every drill,” she said. “I think the coaches have a big impact on this because it’s what they expect. Once the freshmen do go out, they’re going 100 percent, all the time. They’re going as hard as they can. Honestly, I don’t think you can tell some of them are freshmen.”

Haynes said that unlike in previous years, the upperclassmen have created a team with better chemistry.

“Our team is 100 percent more together and playing for each other,” she said. “We’re closer on and off the field. … Last year, we didn’t act as a whole. This year, we are.”