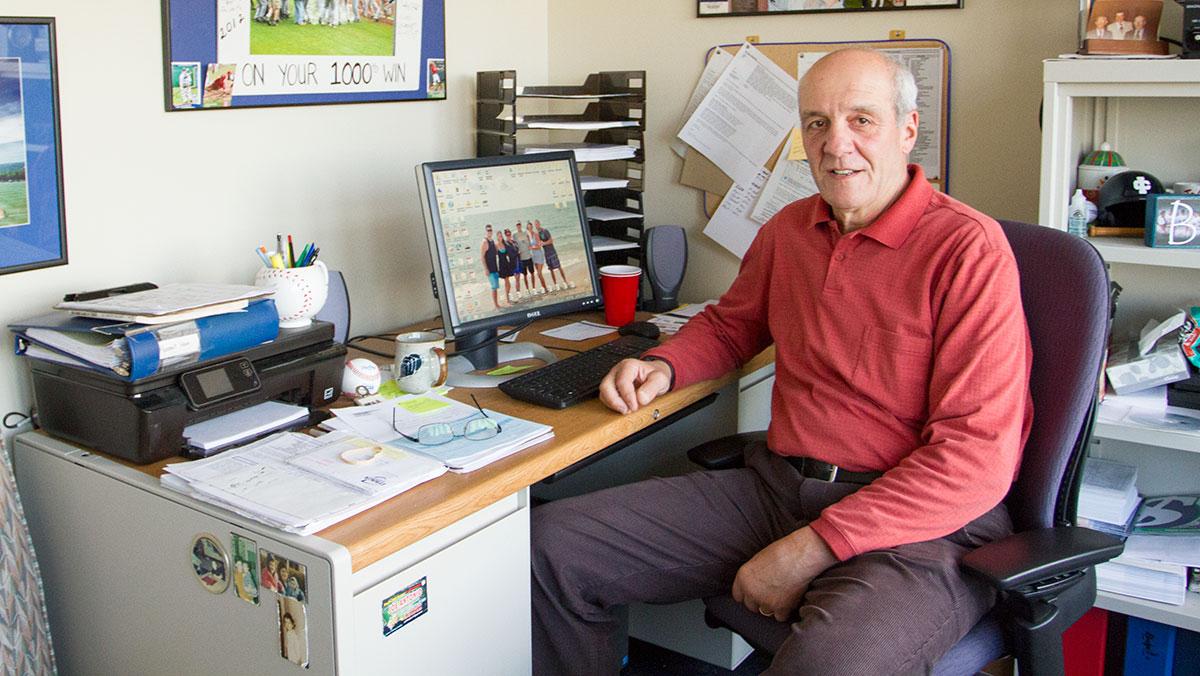 Last month, Ithaca College head baseball coach George Valesente was formally inducted into the New York State Baseball Hall of Fame at the Hilton Garden Inn in Troy, New York. The NYS Baseball Hall of Fame acknowledges the success of players and contributors to baseball from New York. As a part of the 2014 induction class, Valesente was unanimously elected along with 16 other inductees.

Staff Writer Jonathan Beck spoke with Valesente about his thoughts on the induction into the Hall of Fame, a look back at his accomplishments and his future coaching the Bombers.

Jonathan Beck: What was your initial reaction when you were informed about the induction?

George Valesente: I wasn’t sure how serious it was because we all have friends that pull pranks on us. I got an email saying that I had been selected to be inducted into the New York State Baseball Hall of Fame, but I had never heard of it before. Initially, I was wondering what it was. Then I sent it over to my wife, and she had no idea either. I Googled it and found out that it is a very prestigious organization with some great former major league players that have come through the state of New York in various capacities as well as coaches and umpires. It was very impressive, and I realized that this is a pretty neat honor, so it was exciting.

JB: Can you describe the experience altogether?

GV: To me, it should be an honor that is appreciated and shared by many, Ithaca College being one, because if I never had the opportunity to be here and coach, this never would have happened. There have been so many people along the way, players specifically, my assistant coaches and of course my family and my wife. There are so many people that have had a hand in this. I believe that it’s a wonderful honor for them as well. It was wonderful to represent all of that.

JB: What first motivated you to get involved in coaching?

GV: Growing up, I was one of those young men who was out of the house early in the morning playing sports with my friends on playgrounds and streets. I played three sports all through high school. When I came to Ithaca College, it was pretty natural that I was going to major in physical education and play sports. I had the offer to play professional baseball for a while, so when I was done in August, my brother told me the Brockport State baseball job was available. It was the right place at the right time.

JB: You were inducted with many famous inductees across Major League Baseball this year, such as former MLB Commissioner Bud Selig and iconic Play-By-Play Broadcaster Vin Scully. How does it feel to be inducted with such prolific individuals in the baseball world?

GV: To be involved and included with them is pretty unique — to listen to them and be in the same room and get an opportunity to thank the people. It was a wonderful ceremony. Our athletic director, Susan Bassett, came. Our former associate athletic director, Mike Lindberg, came as well as former players and my family. It was an extremely enjoyable event.

JB: What is your most memorable baseball moment as a coach?

GV: It is very exciting to win a national championship. It is hard to describe the feeling. The first one in 1980 was exciting, no question about it. However, the journey getting there was sort of cloudy. We had a good team, but I did not know what to expect. We just went and played. From that point on, we were planning to get back there. The championship in 1988 was basically a formulated kind of approach that we had been working on for years. When we won it in 1988 we were a really solid team, but that was more enjoyable because we knew what we had to do and the plan worked out. Those two experiences are at the top of the list.

JB: This seems like a great way to end an illustrious career such as yours. How much have you thought about stepping away from the game?

GV: My wife believes that I am not ready to retire. I still hopefully have good enough health to continue. When I get to the point where I believe I am a detriment to the program and the program is starting to suffer because of my age or my inability to continue to do the things I do, then I will step away. I have no plans at this time. I am not sure exactly when that will be. It is year by year. I will continue as long as they want to keep me here, and the young men gain a lot from it.