Varsity and club teams participate in Relay for Life 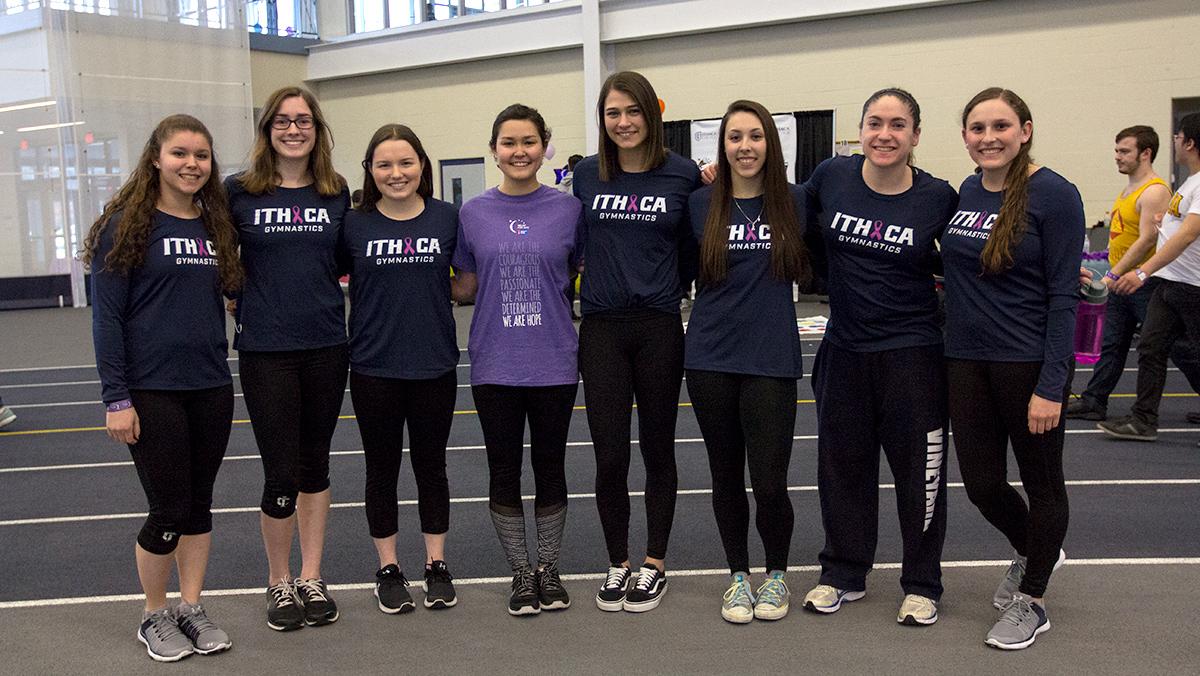 CAITIE IHRIG/THE ITHACAN
The Ithaca College gymnastics team participated in Relay for Life from 2 p.m. March 25 to 2 a.m. March 26 for the second consecutive year in support of its teammate sophomore Rachel Lee – the women in the purple shirt – who battled leukemia.
By Samantha Cavalli — Staff Writer
Published: March 28, 2017

As sophomore Rachel Lee stepped toward center stage at Relay for Life and an announcer read facts about her journey with leukemia, the gymnastics team — her teammates — stood on the track to show their support.

After the survivors walked the first lap, the rest of the participants were able to join them. The gymnastics team surrounded Lee, walking another lap. This is the gymnastics team’s second year attending Relay.

“What I went through last year was definitely a struggle, but having my teammates there made things so much easier ‘cause if I was having a really bad day, I always had someone to talk to and they would just be there for me,” Lee said. “They weren’t there physically all the time, but I knew that they were there emotionally.

At this year’s Relay for Life event on March 25, nine sport and dance teams participated to show their support in the fight against cancer. Out of $46,405 raised by all 62 teams, sports and dance teams raised $3,096.

Junior Christina Yuu has participated in Relay for Life for the past two years with the IC On the Floor Dance Company and the IC Unbound Dance Company. This year, as president of IC Unbound, she reached out to the members of the company to see if they were interested in participating in the event. IC Unbound raised $650, placing them in the top 10 for raising the most money for the event.

“Our company is really trying to give back to the community because we feel so lucky and blessed to have so many family and friends come support us that we want to give back,” Yuu said.

Last semester, in dedication to her aunt who died of cancer in the summer of 2016, Yuu choreographed a dance to the song “Footprints in the Sand” by Leona Lewis. IC Unbound performed the dance during Relay for Life.

Junior Jennifer Goldhar has been participating in Relay for Life for the women’s rugby team since she joined the team her freshman year. This year, the team raised $265 to go toward the cause.

“Cancer is something that has affected our teammates or family members and effects everyone, I think,” Goldhar said. “My best friend had testicular cancer, and my aunt passed away from breast cancer last year, and it’s a fun kind of day to support a really amazing organization that does really fantastic things for everyone.”

Sophomore Caitlyn McBride and junior Mina Shernan said they were fully behind Lee in her battle with leukemia.

“When we did Relay for Life as a team last year for the first time, it was in honor of her and her battle that she was currently going through with treatment,” McBride said. “This year, we do it with Rachel walking with us as a survivor, which is just truly amazing and inspirational for us.”

Participants at Relay for Life had varying reasons for going to the event; for Yuu, it was her personal connections.

“I have a lot of family members that have unfortunately passed away from cancer or battling cancer, and I think a lot of the other team members have a special place for people who are battling cancer,” Yuu said. “It is always a friend or family member, so participating in Relay for Life gives us a chance to come together as a company and really support each other.”

Goldhar said Relay is a way to honor those you have lost and to celebrate those who have survived.

“It’s a fun way to celebrate something that is not so fun and to honor people that you’ve lost or to honor survivors who are here and to just enjoy times with friends for a purpose,” she said.

Shernan said she is inspired by people who are battling cancer and can overcome their challenges.

“Relay to me means getting together for one single cause and trying to help others fight in their battles,” Shernan said. “It is important for me to realize that someone with cancer is going through so much more struggle than I am. I can look up to someone like Rachel and everything she has been through. Whatever I’m dealing with doesn’t compare. I need to fight just like every other survivor.”

Hollywood and the support for cancer research will join forces for the Relay for Life of Ithaca College from 2 p.m. March 29 to 2 a.m. March 30 in the Athletics and Events Center.

The 2011 Relay For Life at Ithaca College drew more than 880 participants and raised $73,381 for the American Cancer Society on Saturday. The event, which was held in Ben Light Gymnasium, marked the first time Ithaca College hosted Relay for Life independent from Cornell University.