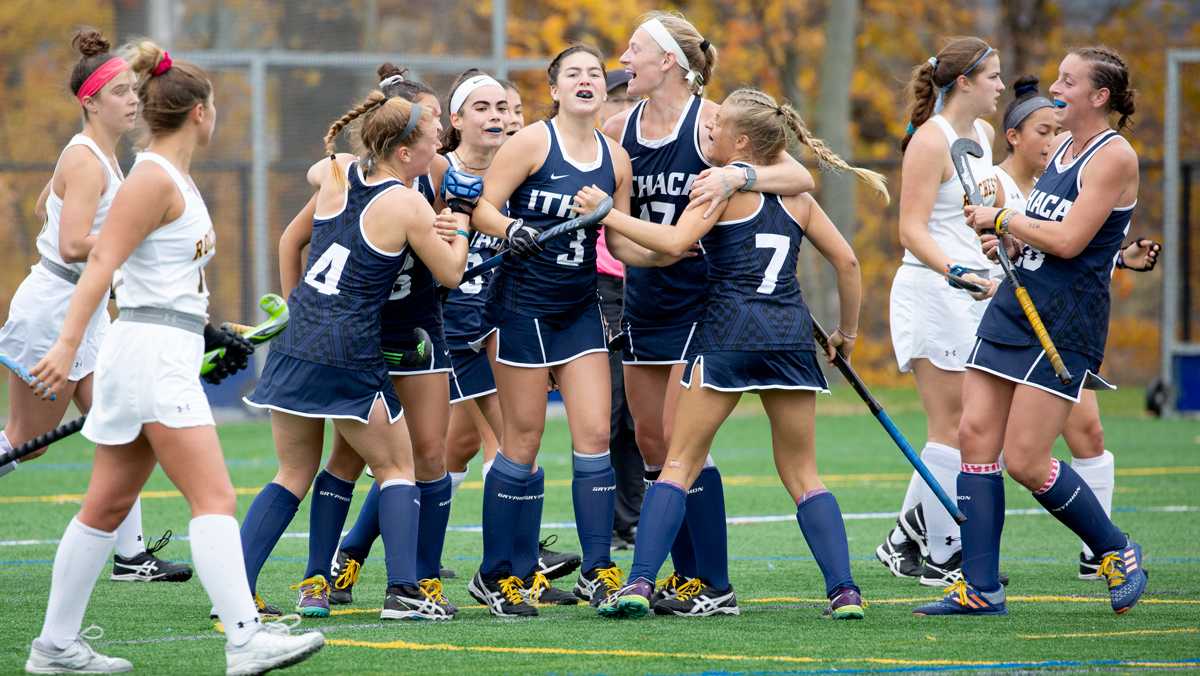 Jill Ruthauser/the ithacan
Members of the field hockey team celebrate scoring their second goal during their senior day game against the University of Rochester on Oct. 27 at Higgins Stadium. The Bombers won the game 2–1.
By Emily Adams — Sports Editor
Published: October 31, 2019

The Ithaca College women’s soccer game Oct. 19 at Carp Wood Field was just another regular–season matchup for Skidmore College’s athletes. But for the Bombers, the game was an opportunity to celebrate their senior class and honor its contributions to the program.

Many varsity teams at the college host ceremonies to celebrate their senior athletes during one of their last home games of the season. Seniors are honored for their accomplishments during their careers as Bombers and often receive gifts from their coaches and teammates.

The women’s soccer team, which is 9–5–1 so far this season, posted a resounding 4–0 victory over the Thoroughbreds at its senior day game. Despite occurring over the college’s fall break, the game was the team’s best-attended home game of the year with 207 spectators.

Before the first whistle, the Bombers honored a group of seven seniors. Senior athletes also put away two of the team’s four goals. Senior midfielder Elise Leavitt was the first scorer of the game, putting the ball in the net off a quick pass from junior forward Alex Epifani. Senior forward Jordyn Haynes chipped in the third goal off a cross from freshman forward Kimberly Campbell.

The South Hill squad was so dominant on offense that senior goalkeeper Sara Jakobsze only had to notch one save in the shutout. Jakobsze said the victory made her senior day even more meaningful.

“The game is nerve–racking because everyone wants to win on their senior day, but to be surrounded by love and support makes everything so much more special,” Jakobsze said. “Winning isn’t everything, but it is a great memory to have.”

At the pregame ceremony, the team’s seniors were announced with their parents, and the junior class presented every senior with gifts from the coaches and team. Head coach Mindy Quigg said the team also honored and gave gifts to their senior athletic trainers. Quigg said senior day is an opportunity for the seniors to celebrate their careers at the college.

“I think athletic participation at IC is a privilege, and I believe our seniors know that and benefit greatly from the experience,” she said. “They have excelled in the classroom. They are strong women who are good teammates and representatives of the athletic department.”

Jakobsze said she will miss everything about college soccer from the competition to the coaching staff when her final season eventually ends.

“Our team gives an experience that doesn’t just include soccer,” Jakobsze said. “We improve ourselves on and off the field every single day. Looking back on my freshman self, I am so happy with who I have grown to become. This team has given me so many skills that will help prepare me for the rest of my life.”

The volleyball team honored its lone senior, setter Caitlyn Floyd, at its match against St. Lawrence University on Oct. 26 in Ben Light Gymnasium. The Bombers swept the Saints 3–0 and secured the second seed in the upcoming Liberty League tournament.

Floyd notched 35 assists during the match, increasing her season total to 912. She also posted two service aces and nine digs. Over the course of her career at the college, Floyd has amassed 3,854 assists, which puts her fourth on the Bombers’ all-time career assist list.

Floyd said one of the things she values most about the volleyball team is the history and expectation of success among the squad.

“It’s really exciting to see the legacy we’re leaving behind each and every year,” Floyd said. “I’m proud to be part of the program.”

Field hockey seniors goalkeeper Savanna Lenker and midfielder Kendall Keil also celebrated their senior day with a win against the University of Rochester on Oct. 27 at Higgins Stadium. The Bombers defeated the Yellowjackets 2–1. Like the volleyball team, the win clinched the No. 2 seed in the Liberty League tournament for the squad.

The game marked Lenker’s 30th win as the Bombers’ starting goalkeeper. She said the senior day game is keeping her motivated to end her senior season strong.

“I think I’ve really been taking it one day at a time,” Lenker said. “It really doesn’t feel the end of something. That was just one of many moments that will make this a special season.”

Lenker said the culture of the field hockey team has been the most meaningful part of her experience on South Hill.

“I have met some of my best friends on this team,” Lenker said. “Our coaches have taken time to help me improve as a person and player. I hope to continue to make this season one to remember and truly cherish each opportunity.”