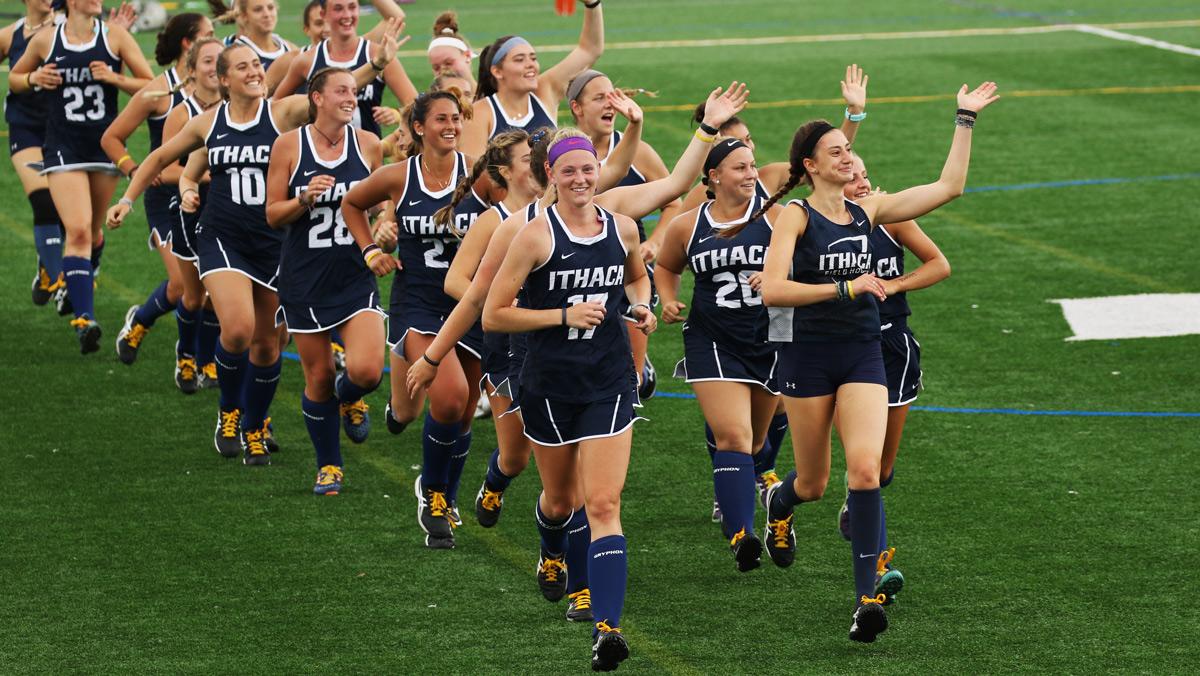 Kristen Harrison/THE ITHACAN
In the Liberty League semifinal Nov. 6, the Bombers faced off against the University of Rochester at Higgins Stadium. The game ended in a 0-2 defeat for the Bombers.
By Emily Adams — Sports Editor
Published: November 7, 2019

As the fall regular season winds down, several Ithaca College varsity teams are preparing for the Liberty League and NCAA tournaments. The field hockey, men’s soccer and volleyball teams all qualified to participate in postseason competition.

The Liberty League tournaments are played throughout the course of a week and seeded based on every team’s regular season finish within the league. Based on the results of the league tournament, the winner qualifies for the NCAA tournament, and a selection committee will choose teams to receive at-large bids.

The women’s soccer team missed out on the tournament after a 0–1 loss to Rensselaer Polytechnic Institute on Nov. 2. The No. 19 football team landed second place in the league after losing to No. 17 Union College in a regular season matchup 31–21.

After earning the No. 2 seed in the tournament, the volleyball team is poised to redeem last year’s disappointing performance in the Liberty League semifinal. The squad, which was undefeated during regular season conference play in 2018, was defeated by Clarkson University 3–1 in Ben Light Gymnasium. This season, Clarkson will host the tournament in Potsdam, New York.

Junior outside hitter Reagan Stone has been a standout for the Bombers so far this season. She has posted 422 kills, approximately double the second-ranked hitter’s total of 214. Sophomore libero Jordyn Lyn Hayashi has been equally dominant defensively, posting 467 digs and 35 receptions.

The squad is coming off a strong pair of games against ranked opponents. On Nov. 1, it forced No. 23 Johnson and Wales University to five sets and came up just short with a 2–3 loss. However, it bounced back against No. 20 Wesleyan University on Nov. 2 and defeated the Cardinals 3–2.

Head coach Johan Dulfer said the team’s strength of schedule this season will be one of its biggest assets going into the challenging competition in the Liberty League.

“They’re going to handle it just fine,” Dulfer said. “We’ve played some of the best teams in the country, so I think if they’re not ready to see good teams by now, they’ll never be ready.”

The volleyball team will also face several new challenges during the tournament. It has two freshmen who have played in every set this year and another who has played every set except for one. None of its five freshmen has any experience with a collegiate championship. This will also be the first time in two years that the tournament has not been held on South Hill.

“Our best play has come, until this past weekend, at home,” Dulfer said. “But the last two years, we hosted the championship and coughed up a hairball. Most of our games are on the road, so maybe being on the road will help us this year.”

The men’s soccer team started the season on a high note, defeating then-No. 5 Messiah College in its second game of the year. The team climbed as high as No. 8 on the United Soccer Coaches Association poll, and it also concluded its regular season with an upset, defeating No. 8 Rensselaer Polytechnic Institute 1–0 Nov. 2 at Carp Wood Field.

However, the Bombers have been inconsistent throughout the regular season. They went 5–3–1 in conference play with losses to Clarkson University, Rochester Institute of Technology and Vassar College. Because of its struggles in the conference, the South Hill squad ended up the fifth seed in the Liberty League tournament and had to compete in the quarterfinal round Nov. 5.

The team faced off against Clarkson on Nov. 5 for the chance to redeem its regular season defeat and move on to the semifinal round. After a scoreless first half, Clarkson freshman defender Kyle Jackson put away a goal off a corner kick, and the South Hill squad never responded. It has never beaten Clarkson and has tied the team only once in five meetings.

Head coach Kyle Dezotell said the team did not make many changes from its last meeting with the Golden Knights.

“Clarkson’s a very similar team to us,” Dezotell said. “They don’t give up many goals. There’s no really magical players on offense. There’s no massive changes. We kind of are who we are.”

The Bombers were eliminated from the tournament and now have to wait until Nov. 11 to find out if they will receive an at-large bid to the NCAA tournament. Last season, the squad missed out on the at-large bid after losing in penalty kicks to St. Lawrence University in the Liberty League final. Dezotell said he is hopeful about the Bombers’ chances.

“We’re feeling good about the win [against RPI],” he said. “We feel like we’re poised for an NCAA Championship run regardless of the Liberty League tournament. We feel like we’ve earned that this year through our performance.”

The field hockey team qualified for its first-ever Liberty League tournament this season and earned the No. 2 seed with a 6–1 conference record. It was 3–4 in 2018.

Head coach Kaitlyn Wahila said it meant a great deal to the team to even qualify for the tournament regardless of the outcome.

“It’s a product of our student–athletes working incredibly hard and not just field hockey working hard but working hard to sustain a positive and developing culture,” she said. “We’ve had highs and lows, but I’m confident that our culture has played a lot into where we are.”

A strong defensive line and new faces on the attack have been critical for the South Hill squad. Sophomore striker Morgan Mullen transferred to Ithaca College from last year’s Division II field hockey champion, East Stroudsburg University. She was the team’s leading scorer with 14 goals. Sophomore midfielder Jacqueline Mirabile was the next highest scorer with six goals.

Senior goalkeeper Savanna Lenker has been a dominant force in the net. She has notched seven shutouts throughout the year and has the second-lowest total of goals allowed with 22.

In the league semifinal Nov. 6, the Bombers faced off against the University of Rochester at Higgins Stadium. The squad’s regular season game against Rochester ended in a 2–1 win that clinched the second seed and the home game on South Hill. However, the Yellowjackets put away an early goal in the rematch off a corner that left the South Hill squad scrambling to come from behind.

The Bombers struggled to maintain possession throughout the game and let up a second goal off a corner in the third quarter. The game ended in a 0–2 defeat for the South Hill squad. Like the men’s soccer team, it will now have to wait for the NCAA selection committee to name at-large bids to see if its season will continue.

“We’ve attacked every single game this year as trying to get out and be 1–0 on that game day,” Wahila said. “Some of those game days we’re 0–1, but the next day we always have an opportunity to be 0–0 again.”