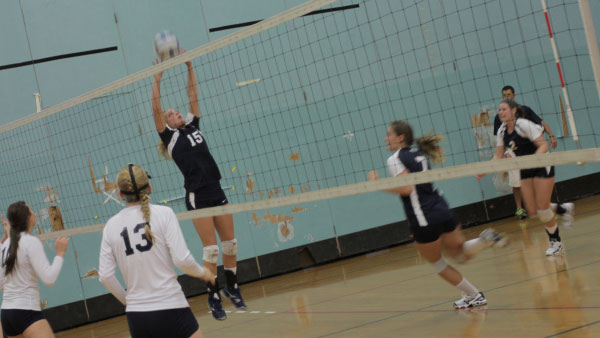 This season’s volleyball team returns its entire squad, with the exception of Marissa Weil ’13, a first-team All-Empire 8 outside hitter. Last season, the former co-captain led the team with 404 kills and 37 blocks. She also shared the team lead for digs with 247.

Among the key players returning are middle blocker Syline Kim and outside hitter Justine Duryea. Both players look to fill the void left by Weil and improve upon the team’s 13–15 record.

During her final season as a Bomber, Kim said, she wants to fully embrace her role as a returning captain. Kim said one of her main goals is to help players develop quickly and avoid mistakes that often occur with a younger team.

“My role on the team last year was a captain,” she said. “This year, I hope to become more of a leader and guide the team on the right path.”

Duryea will be a co-captain for the Bombers. She said it is important for her to work alongside Kim to create a competitive environment that pushes the underclassmen to play to their potential.

“We only had one senior last year,” she said. “Now I’m a senior and only one of two. With so many incoming freshmen — and underclassmen in general — I think it will be important that both Syline and I set a good example for them and really challenge ourselves and the team to play our best volleyball.”

A breakout player to watch this year is sophomore Carly Garone. The returning setter received Empire 8 Rookie of the Year honors last season, becoming only the third player in Ithaca College volleyball history to do so. She also won Empire 8 Rookie of the Week twice in her debut season. She gathered her first award after amassing 124 assists at the Bomber Invitational tournament, and her second came after the Ithaca Tournament, where she netted 131 assists, 24 digs, 12 kills and six aces.

With Weil no longer leading the the team as a playmaker, the players will face new challenges to overcome. But Garone said the team’s youth last year gave many players valuable experience, which they can use this season to elevate their play.

“Unfortunately, we lost our one senior, [Weil], who was a huge asset to our offense last year,” she said. “But the fact that we were young gave us an advantage because we all had a chance to play and contribute something to our team, which makes us even more confident this year after having one season under our belt.”

Along with many of the returning players, Duryea said she is also anxious to play with the freshmen recruits who will be joining the team. She said their skills, when combined with the rest of the team’s ability, will improve the entire unit’s performance.

“We have a lot of new girls coming in who are all very talented, and I think our team will have a lot of depth,” she said. “The girls that are returning gained a lot of experience from last year, so having most of them back will only add to our depth.”

Head Coach Janet Donovan returns for her 22nd season and has set a summer offseason workout schedule for the team. She sent the players packets with cardio, lifting and abdominals exercises — all aimed at priming them for the 2013 season.

While Garone said the summer workouts have been helpful, she said the players have been working outside the gym to motivate one another to become a tougher team.

“We have all kept in contact over the summer once a week; we check in with each other to see how our workouts are going,” Garone said. “We have held each other accountable all summer, which will make us a stronger unit this season, not only physically but mentally as well.”

The Bombers will begin their season with a four-game road trip before coming back to Ithaca for their home opener at 5:30 p.m. on Sept. 6 against Cazenovia College.