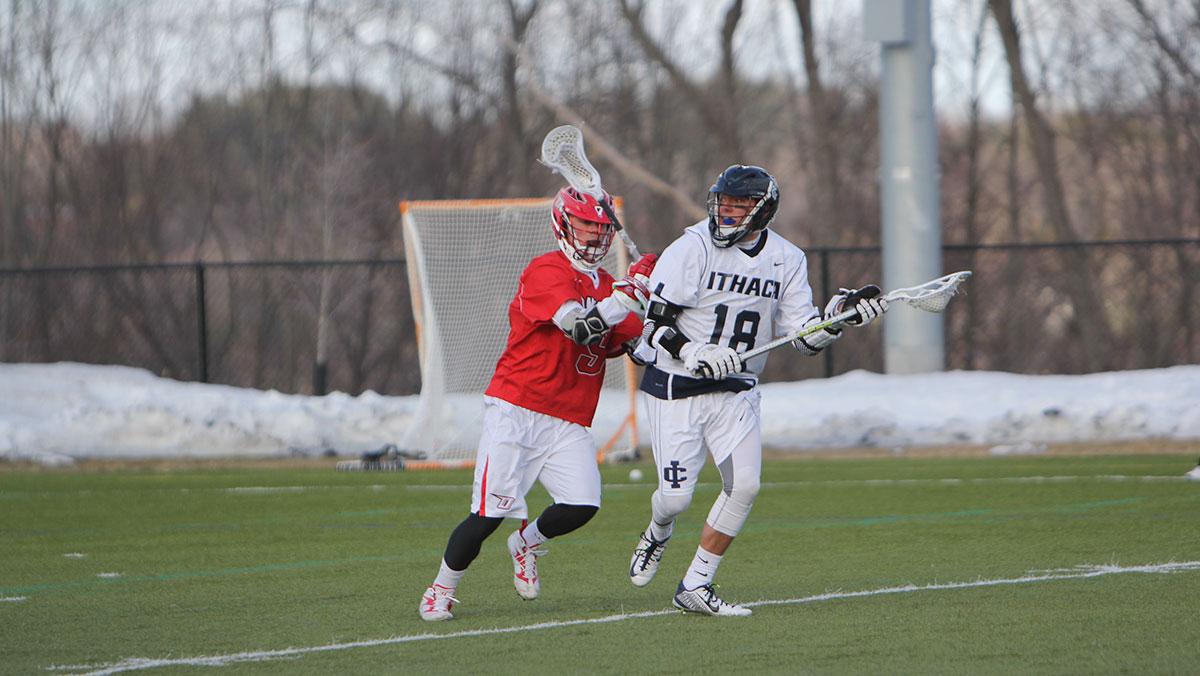 After finishing last season with a loss in the Empire 8 Championship game and barely missing the NCAA tournament, the Ithaca College men’s lacrosse team enters its 2016 season as the 18th-ranked team in the nation, according to the United States Intercollegiate Lacrosse Association.

The Bombers have lived up to their top-25 national ranking thus far into the 2016 season. In the squad’s season opener against Marywood University, the Blue and Gold defeated the Pacers 16–4.

The team finished with a 13–5 record last season, and head coach Jeff Long said after being so close last year to making the cut for NCAA’s, the squad is in a good position to improve

“I think one more win would have put us in the NCAA tournament last year for sure,” Long said. “Hopefully, we start off this season where we left off last spring. So far, we’ve been able to hit the ground running this preseason.”

Long said the team’s four seniors will have a massive impact this season both on the field and as leaders.

“We have a really good, small senior class this year,” Long said. “All four of them will see some serious minutes this year, which will give them strong opportunities to be leaders on this team.”

Sidnam was a brick wall for the Blue and Gold last season. His 150 saves were the second-best total in the Empire 8 Conference.

In addition, he ranked second with a goals against average of 7.44 as well as third with a saves percentage of .556, which was three one-thousandths of a point behind Utica College goalie Andrew DiOrio, who finished in second place.

The Bombers’ leading scorer last year was junior attack John Shumway, who started all 18 games for the team and put up 42 goals and 29 assists. He said the biggest key to their season was going to be hard work and determination.

“We have to put in the work during practice if we want to be successful this season,” Shumway said. “None of us really have a problem doing that because for me playing lacrosse is the best two hours of my day, so I never have an issue with a hard practice because I’m still getting to play lacrosse.”

Another key piece of the team this year will be junior attack John Januszkiewicz, who received first-team All–Empire 8 honors last season and was only one goal behind Shumway for the team lead.

Shumway also said while he enjoys receiving personal accolades, it is much more important to him that the team plays well.

“Would I love to be an All-American again? Yeah, for sure. But I would much rather have that Empire 8 Champions’ T-shirt,” Shumway said. “We accomplished that my freshman year when I was hurt, so I wasn’t a part of it, but this time, I would like to be able to contribute to it.”

He also mentioned that a lesser goal for the team this year is to beat SUNY Cortland, which the Blue and Gold have not beaten since 2009 and whose last three matchups have all gone into at least one overtime period.

While there were no major personnel changes on the team this year, the team is looking to make changes to its style of play. Long said it is implementing new offensive and defensive schemes this preseason to avoid predictability.

“We are trying to be more varietal on offense and defense this year,” Long said. “We sort of got stuck in same two formations, and if you play the same way for the whole 60 minutes, teams will start to figure you out.”

Last season, the Blue and Gold’s offense ranked in the top three in several categories.

Defensively, the South Hill squad’s goalie staff was stellar as well. The Bombers’ goals against average of 7.56 was just good enough for the top spot in the conference.

The players have managed to avoid any serious injuries so far this preseason, and Long said that has been one of the most important factors to their preparation. He said he thinks the team has looked good so far, but he will not truly know where it stands until the first game.

“The big thing will be, how do we make the transition from practice to games. That’s when we’ll see how the freshmen react to this level of play and whether or not all of our preparation has paid off,” Long said.

Long is not the only one who is going into the first game with a positive outlook. Sophomore attack Jacob Cotton said he is also pleased with how the preseason has gone and now just wants the season to start.

“I think we are way ahead of where we were this time last year. We’ve looked really good so far,” Cotton said. “All we want now is for it to be gameday. We just want to get out there and play.”