Kendyl Bennett
Freshman Pearl Outlaw, a member of the Ithaca College women's rowing team, was born with a genetic condition called retinitis pigmentosa. She was born with some light receptors and color receptors in her eyes not functioning properly, and retinitis pigmentosa causes the ones that are working to slowly deteriorate over time.
By Danielle Allentuck — Sports Editor
Published: September 28, 2016

With the sun just beginning its ascent, freshman Pearl Outlaw, with the help of Becky Robinson, head coach of the Ithaca College rowing team, makes her way down the dock on the Cayuga Inlet, carefully stepping around oars and other items lying around. Robinson helps Outlaw find her footing and step into the boat, and with a push off the side, the nine members of the novice crew boat set off into the water.

Outlaw relies on sound, feel and experience, rather than her vision, to help her navigate and stay in line with the other rowers.

“That’s the great thing about rowing, and I think that’s why I chose rowing — because it’s all about feel,” Outlaw said. “Once you’ve been rowing with people for a solid chunk of time, you just all move as one thing.”

Outlaw was diagnosed when she was 9 years old, and today, she said, she can see shapes and colors, but not small details.

“The way I describe it is as if you are wearing fogged-up swim goggles,” she said. “The peripheral is very restricted, and I have this big ring of blind spots around my vision, and the rest is very cloudy and foggy. It’s hard because I don’t ever remember having 20/20 vision — this is normal for me.” 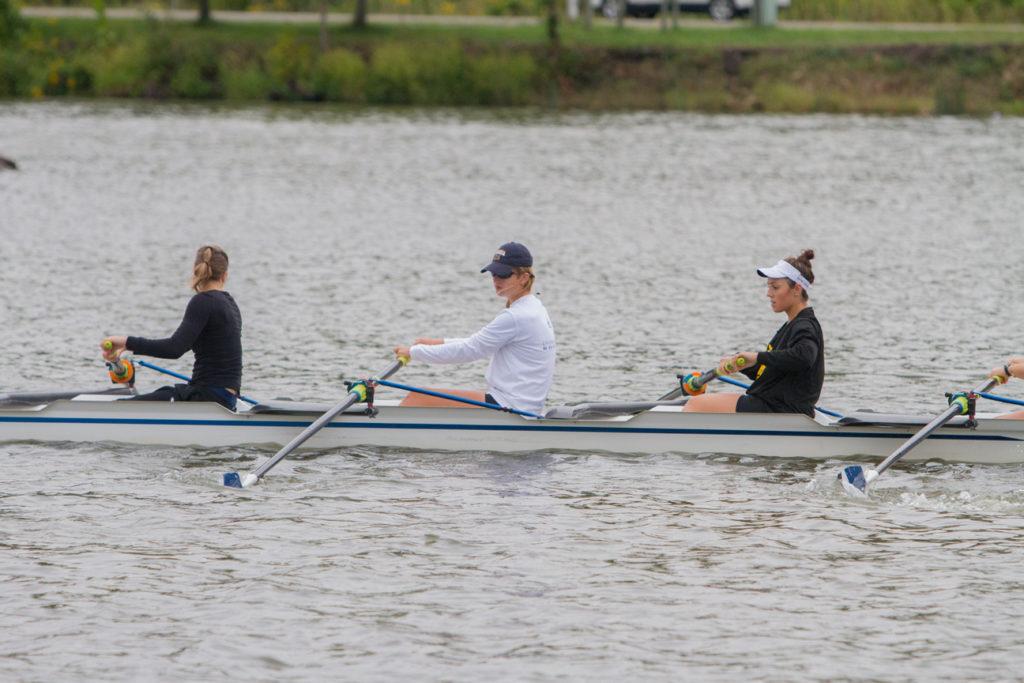 With no prior interest in the sport, she became a rower late in the game.

On a hot summer morning, Outlaw stepped into a crew boat for the first time before her sophomore year of high school.

One of her teachers at Tandem Friends School in Charlottesville, Virginia, had told her class that she was going to attend a learn-to-row program and asked if anyone was interested in going with her. Outlaw decided to go, for no reason other than that it sounded like an adventure. So at 5:45 a.m., she headed to the local inlet to partake in the clinic. She was a part of her high school’s cross-country and swimming teams at the time but was looking for something else.

As soon as she took her first stroke, she said, she felt an instant connection and knew this was the sport for her.

“I just started, and I couldn’t stop,” Outlaw said. “Any chance to row, I’m going to take it, and I’m not going to stop. I loved it so much.”

Her high school didn’t have a team, so during her junior year, she went out on the water every morning at 6 a.m. in the pitch-black darkness with one of her coaches from the clinic to practice.

After a few months, she caught the eye of Cathy Coffman, the varsity rowing coach at Albemarle High School, the public high school in her town, who invited her to join her team for winter training and, later, to become a member of the team.

“As a crew coach, I am all about spreading the sport and joy of rowing,” Coffman said. “My assistant coach and I felt very strongly about allowing Pearl to join our team. She is a great example for other teens of someone who does not let her disability define who she is.”

Outlaw said she felt discouraged after her first day of practice but that it didn’t stop her from going to the next one.

“I remember my first day of that. It was horrible,” Outlaw said. “I was so nervous I couldn’t relax, and my rowing was super bad. I went home that day, and I was like, ‘Everyone hates me. They probably think I’m horrible. I never want to go back.’ But I kept going.”

Outlaw said she decided during her junior year of high school that she wanted to row in college and began searching for schools that had both her potential major — exercise science — and a rowing program.

At first, she said, she had no interest in attending the college. It wasn’t until Christmas break of her senior year of high school that she started seriously considering attending the college. In February of her senior year, she went on a recruiting trip for crew, and right away, she said, she knew this was the school for her.

“One of the things that made me really want to come here was my meeting with Becky Robinson and some of the girls on the team,” Outlaw said. “I just remember feeling like I’m actually wanted here. It was an amazing moment, and it was pretty much the deciding moment.” 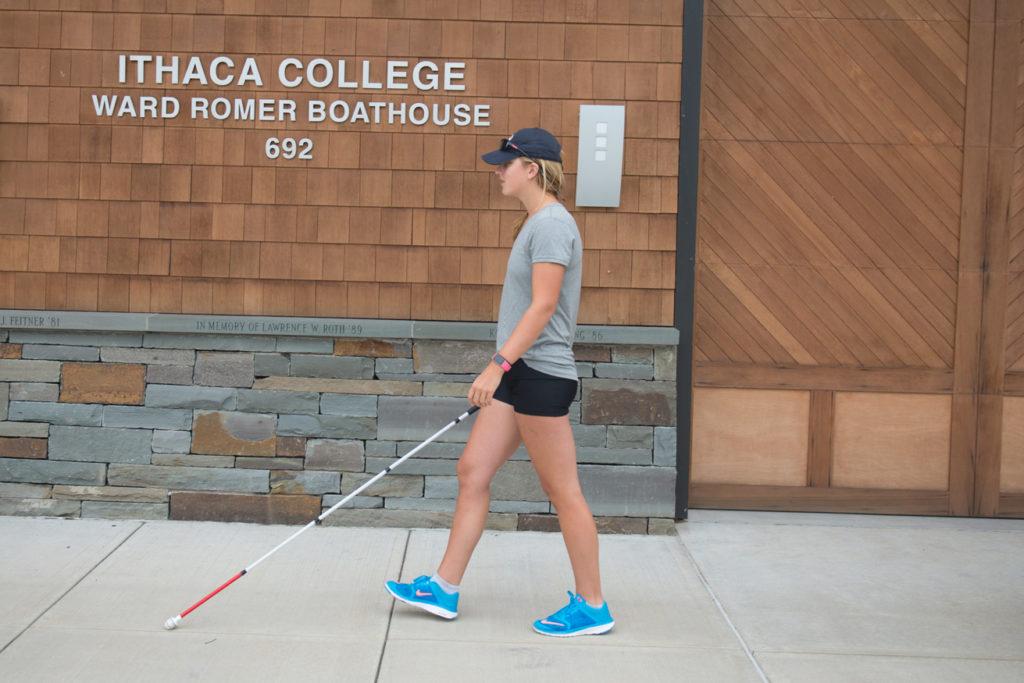 Outlaw uses a cane for mobility and sunglasses to protect her eyes. SAM FULLER/THEITHACAN

In everyday life, Outlaw has learned to adapt and live on her own. She uses a cane for mobility, sunglasses to protect her eyes and friends and teammates to help her out when needed. She said she did not start using her cane full time until her junior year of high school because, before then, she thought it would be like a sign on her back causing people to stare.

“I use my cane all the time, which I didn’t use to do because I thought it was so uncool and everyone was going to look at me all the time,” Outlaw said. “Now, I don’t go anywhere without it. It’s like my right arm. If I don’t have it, I don’t know what to do.”

Outlaw uses big fonts and large text sizes to help her out in the classroom and is starting to learn Braille. She just put in a request for a guide dog and is hoping to have one next year.

Her roommate, freshman Haley Raymond, is also a member of crew and rows in the same boat as Outlaw. Raymond said she acts as a guide for her.

“At night, when she can’t see as much, I’m there at arm length so I can guide her around,” Raymond said. “She’s very able to do things on her own. It’s just at night when she really needs my help.”

As for rowing, Outlaw said she does not have to make a lot of adaptations. Robinson said rowing is different from other sports because out of all of the senses, sight is the least important.

“There are a lot of sports that rely on hand-eye coordination, which you’re just not going to be able to do,” Robinson said. “Rowing is just a great thing because you probably, of all of your senses, rely on your sight the least.”

One thing Outlaw still struggles with outside the water is seeing the screen on the stationary rowing machines, but she can count her strokes to calculate how many meters she is traveling. She also uses a guide when the team is in the weight room. 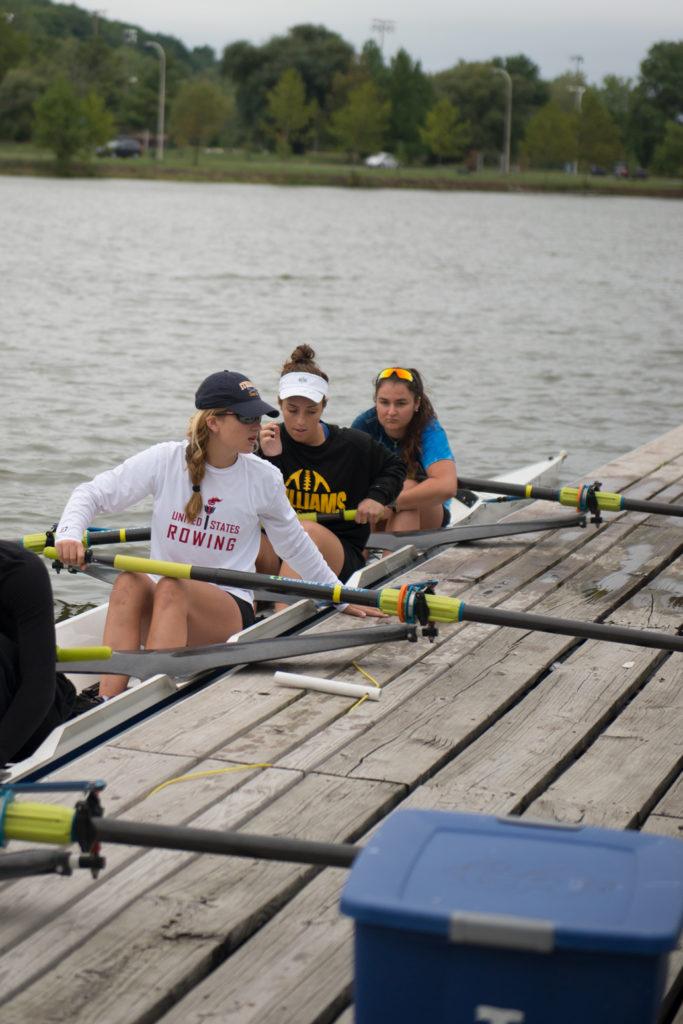 Outlaw sets up her oar Sept. 23 before her practice. SAM FULLER/THE ITHACAN

She said her teammates understand now when she needs them to help her and when she doesn’t.

Outlaw is currently rowing in a novice boat composed entirely of experienced freshmen, something Robinson said is not normal. Usually, only a few freshmen have experience, and all of the freshmen are put into a novice, unexperienced boat together.

“They’ve been almost treated like a boat from the beginning,” Robinson said. “There’s enough of them that they are rowing up with varsity, which we don’t normally do. They perform well enough to row alongside varsity and do well.”

Freshman rower Libby Ryan said she runs down to the boathouse with Outlaw and lets her know where potholes or other obstacles are. She said even though Outlaw has trouble seeing things, she is still always there to help out her teammates whenever needed.

“Pearl works extremely hard and is very dedicated to rowing,” Ryan said. “She always wants to get better, and she’s definitely a team player.”

Outlaw has big rowing dreams and said she hopes to one day represent the United States at the Paralympics. But for now, her main focus is to prepare for the team’s first regatta of the season Oct. 1, when the Bombers will compete at the Challenge of the Canal in Geneva, New York.

“My goal is to just improve as much as I can,” she said. “I love the technical on-the-water aspect and learning about the boat and how it’s built and how it works.”

Outlaw said she hopes her perseverance can be an inspiration for people living with similar conditions.

“People always tell me, ‘Oh, you’re so brave. You’re so this. You’re so that,’ and I’m always like, ‘No, I’m not. I’m just living my life,’” Outlaw said. “I’m showing people you can do it and that you don’t just have to live your life in a blind world.”