Volleyball bounces back after tough loss to Keuka 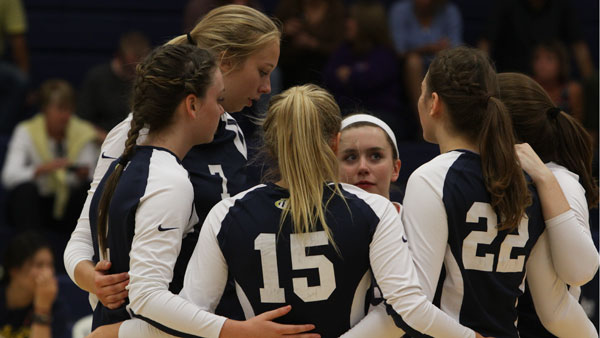 Grace Chang, freshman outside hitter, set her feet and focused her eyes toward the opposing Keuka College Storm as its server prepared to strike. The two teams traded sets back and forth, which forced the match into a fifth set tiebreaker. As the final bell rang, Chang looked up at the scoreboard and wiped the sweat off her brow — it read 12–15 in favor of Keuka.

The volleyball team used this heartbreaking loss to propel it forward, in preparation for the Lycoming Tip-Off Classic, which was just two days later in Williamsport, Pa.

The contest on Sept. 25 went back and forth. The teams split the first two matches, and Keuka won the third 25–20. The Storm took an early lead going into the fourth set, which would seal its win. The Bombers rallied fiercely behind a loud Hill Center crowd, and they forced a fifth set after a 25–23 win in the fourth, but the Bombers lost the final set.

The team only had one day of practice after the loss on Sept. 25 before it left for its next tournament on Sept. 27–28. Chang said the team is using this loss as motivation to move forward.

“I believe, and everyone else on the team believes, that we fully could’ve won,” she said. “We wanted to dig deep and think about what a team is and how we can bond more, how we can connect more and build the synergy of our team.”

Junior middle Abbie Hutchinson said the struggles the team is facing are unrelated to the physical ability of the team, and more about its mentality.

“Coach will take time out of practice to meet together, and there’s a new meeting room in Hill that’s really convenient right across the way for that,” she said. “We’re really working on the mental aspect of the game to try to become what we are capable of being.”

The statistics of the game showed solid productivity from four players for the Blue and Gold. Chang; Hutchinson; Rylie Bean, junior outside hitter; and Shaelynn Schmidt, freshman outside hitter, all had double-digit points. Four of the top five scorers in the game were Bombers.

Dylan Gawinski-Stern, sophomore defensive specialist, said it was frustrating to play well and not leave with a victory.

In the Lycoming College tournament, the team dropped both games on its first day of play. It lost 1–3 against St. Mary’s College of Maryland and then fell 2–3 to the Lycoming Warriors.

On the second day, the Bombers seemed renewed as they opened with a 3–0 win against Pennsylvania College of Technology and finished the day with a 3–2 overtime win against Misericordia University.

Hutchinson said she knows the team has talent, which has been evident throughout the season, but it’s just a matter of combining the physical and mental facets of the game to improve.

“Individually, we all have our own strengths, but we’re just trying to get to where we can work together and pick each other up to the point where we can play at our highest level together,” she said.