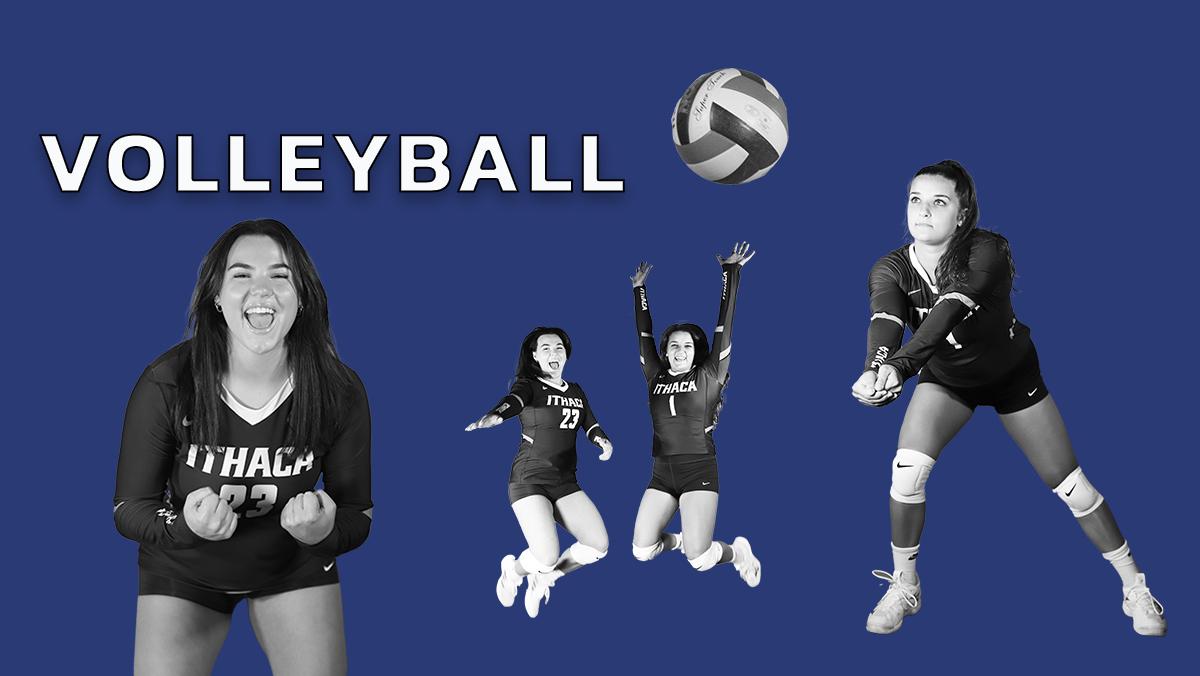 Kalysta Donaghy-Robinson, Leila Marcillo-Gomez/The Ithacan
From left, sophomore Faith Sabatier and senior Grace Isaksen of the Ithaca College volleyball team. Despite a good Liberty League performance in 2021, the Bombers are looking to improve on their record.
By Nicolas Rosado — Staff Writer
Published: August 31, 2022

The Ithaca College volleyball team is ready to begin its second season back since the COVID-19 pandemic with the upcoming season quickly approaching.

After returning to the court last fall, the Bombers are looking to build on the conference success they had last season. Although the team went just 16–14 overall in 2021, it went 6–1 against Liberty League opponents. The strong conference performance led the team to the Liberty League semifinal match, which it lost 3–1 to Clarkson University.

Despite the team not advancing to the conference finals, the Bombers earned one of 20 at-large bids to the NCAA tournament, where they fell to No. 8 University of Wisconsin-Whitewater in the first round.

Head coach Johan Dulfer is entering his seventh season at the helm of the volleyball program. While this year’s team is a young squad that is only returning three seniors while adding six freshmen to the 18-woman roster, Dulfer said he can already sense a difference in experience with this squad.

Dulfer said a big part of this season will be leadership. Despite the low number of upperclassmen on the roster, there are still multiple athletes that are expected to step in this season. Dulfer said he expects the team leaders to be an example to the rest of the squad throughout the season.

“Our returners know very, very well what their program should look like and what the expectations are,” Dulfer said. “And I think they’re more comfortable now setting boundaries because they’ve seen what happens when you don’t do that when circumstances dictate otherwise.”

Senior libero and defensive specialist Grace Isaksen is expected to be one of the leaders of this Bombers squad after she was named to the Liberty League All-Academic Team for the second year in a row in 2021.

Isaksen said that her previous experiences in being on the team, coupled with the fact that this year’s roster is a bit younger, will require her to rise to a leadership role, which she said she expects to include a lot of support for her teammates.

“With everything with COVID[-19], last year was definitely a rebuilding season, I mean the entire country was going through it,” Isaksen said. “And so, now I feel like this year, we can finally start getting back, like, in the swing of things. … It’s really important for me to step up and be a leader and also be supportive and just understanding of everything going on.”

Isaksen is not the only player on the roster who plans on being a huge supporter of her teammates. Sophomore outside/opposite Faith Sabatier expects to share a similar role to the one Isaksen described. She even considers it to be her most important goal this season.

“Honestly, my most important goal is to be a good teammate, always cheer on the next person or, you know, pick somebody up if you see that somebody is down,” Sabatier said. “Especially now that I have, like, my first year under my belt, I feel like I’m able to help with situations more. … I can help the incoming freshmen, support them on and off the court just overall, and be a good teammate.”

With great leadership often comes high expectations. This year’s squad definitely have both, and Sabatier echoed the sentiment of high expectations when discussing the team goals for this season.

“I would say the pretty obvious one is always trying to make it to the NCAA Tournament,” Sabatier said. “Another goal is to be Liberty League champions. We were really close last year, and I think this year we have a really good chance. A lot of our team is still young, we have a lot of new freshmen who are coming in and really talented, so I’m excited to see where that takes us.”

With the goals being set for the program’s first-ever Liberty League title and an NCAA tournament appearance, those expectations are being met with loads of confidence from the players. That confidence has the Bombers ready to tackle the season head-on.