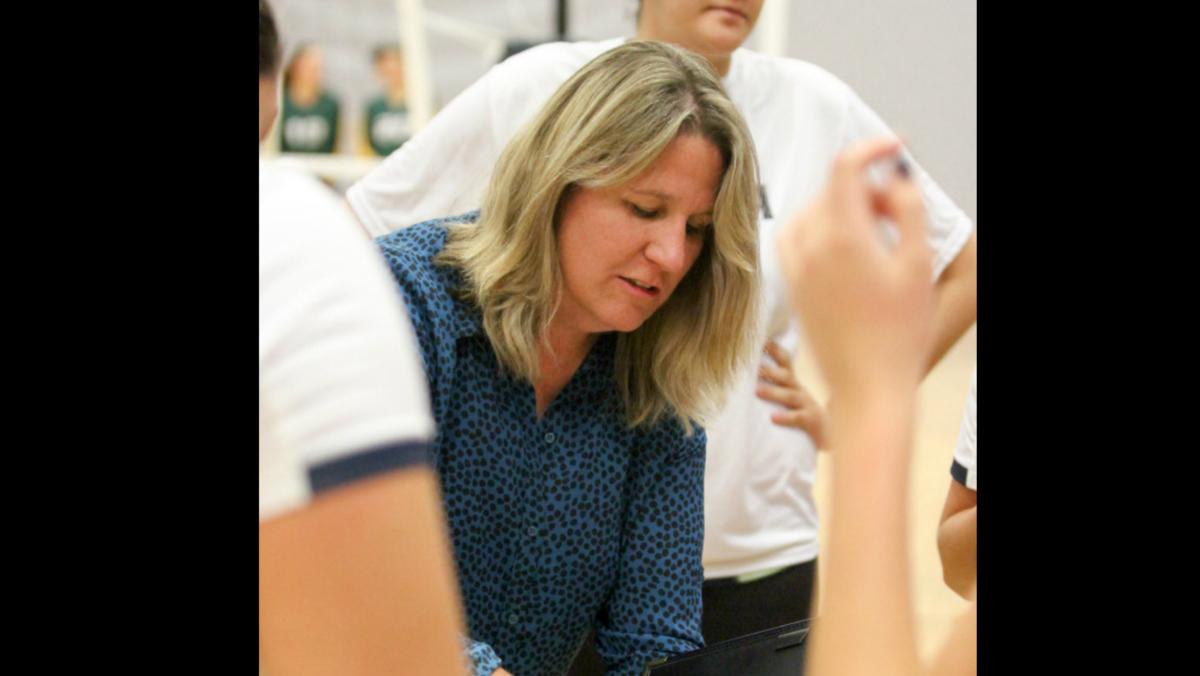 Fernando Ferraz/The Ithacan
Head coach Janet Donovan coaches the volleyball team during a timeout in a match against Keuka College on Sept. 23, 2015 in Ben Light Gymnasium. Donovan has announced she has resigned from her coaching position.
By Andrew Sullivan — Sports Editor
Published: January 15, 2016

Janet Donovan, Ithaca College volleyball head coach, has resigned from her head coaching position, according to an announcement from the college’s athletics department.

In the Jan. 15 announcement, Donovan said she is stepping down from her position in order to spend more time with her family and take care of her personal health.

Donovan stated in the announcement that she “left the program better than when I found it” and she was “blessed that [she] ended [her] time at Ithaca coaching extraordinary student-athletes, mentoring young talented assistant coaches, and being supported by their wonderful families.”

Donovan’s resignation comes in light of athletes’ raising concerns about her and the volleyball program in recent months.

Susan Bassett, director of Intercollegiate Athletics and Recreational Sports, said Donovan’s resignation had nothing to do with the allegations against her.

“I’m sure many things went into her consideration,” Bassett said. “I think that there were plenty of people who supported her. I’m sure she was focused on that, but at this point really wanted to make a change and do something else. Twenty-four years is a long time to do one thing. I’m just taking it at face value that she wants to, as she said, spend more time with her family and focus on her health and well-being.”

Freshman outside hitter Hailey Adler said she will miss having Donovan as her coach.

“I was surprised,” Adler said of the resignation. “However, I do respect her decision to focus on her health and her family, as she dedicated a lot of time to be with the team each day. … She knew how to push the team to achieve our personal bests, which made us a better team as a whole.”

Bassett said Donovan’s lasting memory at the college will be her successful work with the volleyball program this past season, as well as over her 24-year career.

“She had a very good win-loss record over time,” Bassett said. “And certainly this past year got the program back to the national stage, winning the Empire 8. I think that would be a big part of it.”

Donovan finished her 24th season at the program this past year, coaching the squad to a 31–5 record and an Empire 8 Conference championship after bowing out in the second round of the NCAA Division III Championship Tournament with a loss to Clarkson University on Nov. 14, 2015.

Donovan wrapped up her career with the Bombers with a 674–295 record and is the college’s winningest volleyball coach.

The job posting for a new head volleyball coach was made the day of Donovan’s resignation and was advertised in NCAA News and the American Volleyball Coaches Association newsletter.

Michelle Manning, associate director of athletics for finance and administration and senior woman administrator, and Bassett will be conducting a national search for the appropriate candidate to lead the volleyball program.

Bassett said her goal is to have someone named to the position by the beginning of March.

She said the athletics office will be looking for a candidate who has a strong knowledge of the sport of volleyball, knows how to design and implement training programs for a team and has excellent recruiting skills along with experience coaching volleyball from any level.

Bassett said she herself has a specific process when candidates are on campus during coaching searches and meet with members of a team for an interactive session, where the team has the opportunity to ask questions about the candidate.

“We’ve been very fortunate that in most of our searches, there’s been great consensus among all the people who’ve met candidates. I think that has proven to be very successful for the outcome. … There will always be a number of important perspectives who look at and meet with our candidates, and all that feedback goes into our decision-making.”

Bassett said the search for a new head coach for athletic programs is the most important aspect of her position as athletic director.

“It’s a responsibility that I really take seriously, and I will exhaust every avenue to make sure that it’s done properly, and we find a great leader for [the volleyball program] and all of our programs anytime the opportunity comes up. … In my mind, the coach is the program, so we will run an excellent process, and I’m very confident we’re going to recruit and hire an excellent leader for this program.”